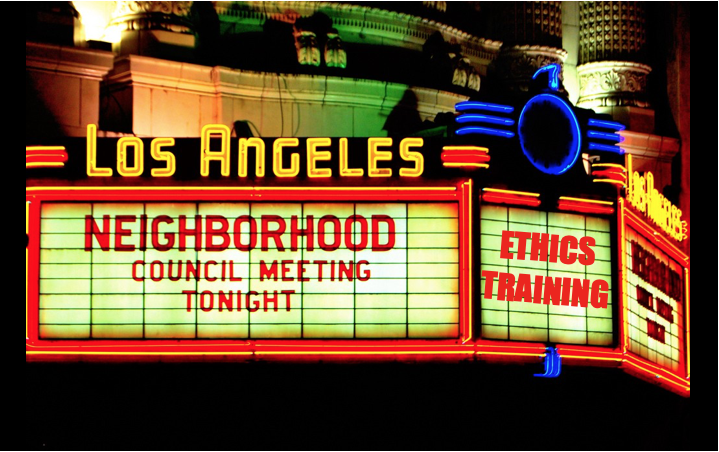 GELFAND’S WORLD - According to state law, I'm supposed to get two hours of training in ethics every two years if I am to remain on my neighborhood council board.

The city has added a couple of other training items, but the ethics training is the bulk of the approximately three hours of my life that I won't get back. I did my training over the weekend, and I'm here to tell you that it is a lesson in life's ironies and the hypocrisy of our local government apparatchiks.

Let's start with the fact that the city's version of the ethics training may be of some use to paid staff members and department heads, but it is almost entirely irrelevant to neighborhood council participants. Consider a few lessons that I relearned from watching the video.

I'm not supposed to accept free trips to Las Vegas, nor free meals that would otherwise be expensive, nor the services of prostitutes as payments for voting in favor of some developer on a city matter.

I'm not supposed to accept lots of money either as a campaign contribution or for my personal use in order to vote in favor of some matter that I might otherwise vote against.

I'm not supposed to accept expensive gifts from people with business before the city.

I'm not supposed to trade valuable city resources such as favorable contracts in exchange for valuable favors to my children or other close relatives such as a spouse.

Get the drift? We've recently seen a series of felony indictments against Los Angeles City Council members for exactly these allegations, yet every single government official down to the lowly neighborhood council board member was required to take this training.

It's a bitter joke, a rude irony that the rules have been spelled out so clearly yet our highest ranking government officials committed these acts and the rest turned a blind eye to them.

And for me and my fellow neighborhood council board members, the training is almost completely irrelevant. We don't hire people except in the most indirect sense, we don't sign contracts, we are not offered trips by lobbyists, and the rules on outside employment have absolutely nothing to do with us.

So every two years, we neighborhood council board members and newly elected board members waste two and a half hours of our lives watching this material so that we can check off the box that said we did our training.

Just to give you an idea of the level of irrelevance, here is a question from one of the quizzes that are a required part of passing the ethics training:

"You are a senior management consultant with the city, but you want to take a part time job as a graphic designer. What must you do before you accept the outside employment?"

If the city ever offers me a six-figure job, I probably won't be looking for an outside gig as a graphic designer, but for the nearly two thousand neighborhood council board members, this is a waste of 6000 hours of our lives.

Here's the excerpt: "Not considered meetings: Conversations between less than a majority of the members"

But the City Attorneys who advise our neighborhood councils have tried to force their own interpretation on the law. It's what they call the "quorum of a quorum" rule. I won't go into it in detail, other than to say that they advise us never to confer in a group that is even half the size of that council majority. The actual Brown Act limits my council to 8 people out of 17 conferring on some matter, but the City Attorneys would apparently limit us to 4 (or maybe it's 3 -- they don't actually explain things very logically) of us ever getting together to discuss future business.

Maybe the Brown Act ought to be written that way, but none of us who has read it can find anything about a quorum of a quorum in it. This is one reason (among others) why we tend not to take what City Attorneys say very seriously.

But for me, the clincher was the section on Due Process. Here is some of what the training video says about the right to due process:

It explains that due process includes " Adjudicative decisions involving the rights of individuals." The training even goes so far as to explain that due process rights come from the 14th Amendment of the U.S. Constitution.

Here's more: "Those with an interest at stake in a quasi-judicial decision must be given due process before a decision is rendered."

Fair enough, except that pretty much every Department of Neighborhood Empowerment decision (DONE) and Board of Neighborhood Commissioners (BONC) proposal that I've written about is a gross violation of due process. Consider just a short list of these issues:

Due process ought to apply to the right to appeal against the use of Exhaustive Efforts by the DONE against a neighborhood council , and it certainly ought to apply to the proposal that the GM gets to suspend a board member without citing a reason and without appeal. It ought to apply to a decision by the GM to forbid some person from being paid by the city for doing clerical work for a neighborhood council, since this is a direct limitation on the right to make a living. I've written about this problem before here. [https://mail.citywatchla.com/index.php/cw/los-angeles/19168-the-beginning-of-the-end-is-done-done]

The city, in its benevolent wisdom, has decided to add a few more minutes to the miserable waste of time that is the official board training. The first is something about the Code of Conduct. In practice, it is a minimal waste of time, because you can watch a short video or just read the policy and sign that you have read it. Not such a big deal except that there is an implication that I am supposed to treat everyone and every opinion with respect. This is the sort of wording that comes out of the mouths of people who don't think things through all that seriously. Let me state it plainly: If some white supremacist or American Nazi or believer in a 2020 Trump victory wants to speak to my council during public comment time, we will hear the comments because our job is to listen to the public. But I will not respect that person or that opinion and I will not hesitate to say so in these pages or outside the doors of our meetings. I suppose the code of conduct is meant to prevent people from interrupting or shouting insults at a public speaker, but the code errs by failing to say simply that. No, some thoughts and comments are not worthy of respect. Minus one for the code of conduct. It is mercifully brief, so plus one for that.

The other training program is in financial matters. It turns out that the process for spending the public's money is a bit complicated in that it involves at least a couple of elected board members and various forms that need to be filled out. This bit of training is also mercifully brief. Its virtue is that it names each of the forms that will need to be filled out and identifies the people (second signer, card holder . . . that sort of thing) who will actually fill out the forms. Apparently these people have to take extensive training at some other place and time in order to be eligible to do their jobs.

What's weird about the finance training is that it has a long quiz (16 questions), only some of which could be deemed to be even marginally relevant to what a neighborhood council board member does. Here is the most ridiculous question of the lot:

"How many people are sitting in the slide for 'Setting an Annual Budget?"

I should point out that to the best of my recollection, one of the slides in the finance training shows what seems to be a typical board or committee sitting around a table. Or maybe on one side of the table. It's not the sort of thing that I would think about too carefully, because the picture doesn't really have a lot to do with the subject matter of the slide, whatever it was. Something to do with the need to get a majority vote I would imagine. The picture could have been a sailboat on the wall of the lobby and it would have about the same level of relevance to me.

I would suppose that most people guess either 10 or 8.

But there is a serious point to bringing this question up. This is what I refer to as a "gotcha" question. It's a way for the questioner to demonstrate superiority while being totally condescending. What I don't know is whether there is any required number of correct answers to get credit for the training, because they don't tell you.

Let me finish by inserting a few notes I made to myself while recovering from the ethics training:

Under Conflicts of Interest, the ethics training states: "All officials must act in the best interest of the public, without regard to personal or private gain."  Wow, how could any City Council member claim to be innocent of this considering that they voted as a bloc for corrupt decisions coming out of the Planning and Land Use Management committee? And the fact that the state requires this training is equally ironic, considering the obsession with raising funds for the next election. Ever hear of a "juice committee?" Back in the good old days -- maybe about 20 or 25 years ago, I heard the term and learned that it referred to a state legislative committee where the members were especially privileged in terms of squeezing campaign contributions out of people with a need for a friendly legislative act. It was, in effect, high level extortion by an elected public body. Such things did exist and continue to exist, but neighborhood council members are supposed to waste hours of our lives learning not to do things that wouldn't be available to us anyway and are done all the time by somebody in government.