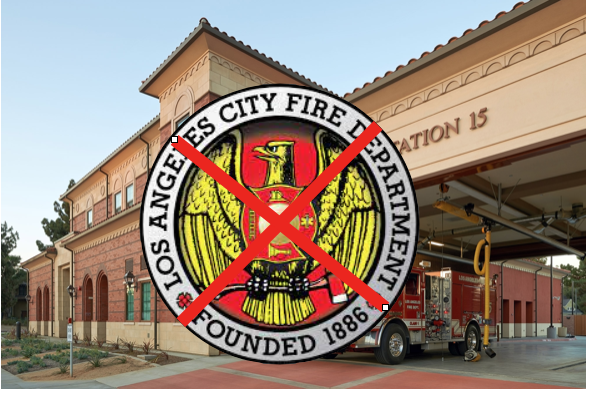 GELFAND’S WORLD - It was the monthly meeting of the emergency preparedness alliance. We were chatting away about everything and nothing, as if we were in an Isaac Asimov short story.

One of the participants made this plaintive comment -- "Why can't we get through to people that they need to be prepared?" There was the usual joking about how people would respond positively if only we were to have a magnitude 5 earthquake right under us.

In other words, enough to shake people up without actual fatalities.

This caused me to do a little thinking about where we were going wrong, and I responded by asking my colleagues the following question:

What if we didn't have a fire department?

That, I believe, summarizes -- at least in analogy -- where we are as a society on the emergency preparedness scale. Let me explain.

In the case of fire or emergency in the City of Los Angeles, there is a well prepared agency that responds immediately. If the issue is a structure that is ablaze or a hillside fire, they come and put it out. If it is a case of a human injury or serious illness, they come immediately and transfer the patient on to the next step in the sequence that leads to treatment.

But in any case, something happens and it is what is supposed to happen.

And then there is our emergency preparedness problem.

And that's where I was stuck. We have been going on for five or six years now, thinking about how to get the people of Los Angeles to stock up on water, food, and prescription drugs -- not to mention the same for their pets -- and we seem to be at about the same position we were when we first started.

And then it hit me that if this were any other problem, we would be calling on government to take action. For example, we have been telling people that they should stock up on water to the extent of one gallon per person per day. Figuring two or three weeks of supply, that would imply maybe 15 or 20 gallons per person. In the City of Los Angeles, our 4 million people would require a stockpile of something like 60 or 80 million gallons.

That sounds like a lot, but by big city standards it really isn't. In fact, if you look up the conversion of gallons to acre feet (the amount of water contained in one acre at one foot of depth) we're really only talking about 245 acre feet. Considering that this is considerably less than one square mile, it's not that much water to stockpile, by government standards. In fact, this is less than a thousandth of the water volume of Castaic lake.

So why is the government (and your neighborhood council) telling you to stockpile water in preparation for an emergency? Mainly, it's because the government is not sure that its system of water mains will survive a large quake. Considering how often our pipes break on calm days, it would not be surprising if basically every major water main cracked or ruptured if we have The Big One.

But let's think this through. Right now, we're telling families to prepare individually by stocking up on their own water and food supplies. It strikes me that this is like telling every block that it should create its own fire department. Stockpiling 60 million gallons of water would be an extraordinary task for individuals, but would be a routine task for any major American city.

So why don't we do it? The answers are multi-fold. But the first and most obvious is that we don't need that water tomorrow, so the way of government is to avoid and evade the task. The next reason is that there would have to be ways of storing all that water in hundreds or thousands of locations all over the city, so that it will not require the use of our pipes and water mains. The last issue is that we would want to restore and replace that water (in all those places) fairly often.

In other words, there are engineering challenges to creating a system of stored water that would be immediately accessible to a shaken-up population and would not require access to broken pipes.

But the engineering challenges are not impossible to achieve. Here's a slightly wild idea for the longer run: In rebuilding our water system so that it will be resistant to earthquake shutdowns, we might build a high volume tank along the pipe every few blocks. Think of these tanks as just places where the pipes get wider, and also are built with shut-off valves that would close automatically if shaken badly. We already have earthquake shutoff valves on our natural gas supplies. The idea of earthquake shutoff valves for water supplies is not impossible. They would just have to be larger.

This would increase the total water volume contained in the system by a few tens of millions of gallons, but the water would constantly be recycled. The trick would be that the tanks would be designed to shut off flow during and after an earthquake. They would then provide a supply of water for everyone within walking distance.

In this way, there would be large localized water supplies that would become available to local residents in the aftermath of a large earthquake. If the earthquake did not damage the surrounding pipes, the water would be turned back on.

Yes, there are lots of other issues that would come up in the immediate aftermath of a major earthquake. Food and sanitation are major requirements when you have to start thinking about a population of more than ten million people spread over several thousand square miles. And then there is the problem of getting essential prescription medications to people, particularly in a system in which insurance companies won't cover refills until they are nearly due.

Suppose we were to have a big earthquake on Monday, and your refills aren't eligible to be filled until Wednesday, and those pills are keeping your heart beating in the proper pace? Our legislators don't seem to have thought of that one. It's time that they do.

Generalizing the concept of "What if we didn't have a Fire Department?"

The concept admittedly came during the equivalent of a kaffee klatch where we were considering why neighborhood council sponsored emergency preparedness has been such a failure. Maybe we are going in the wrong direction. Maybe what neighborhood councils should be doing is lobbying government to design and supply the services that would save lives in the aftermath of a large earthquake. Right now we are doing our best to create local organizations so that we would be able to deal with local problems in the hours after the shaking stops. Those organizations are preparing to do immediate reconnaissance in order to search out the wounded, but we are not trauma surgeons or ambulance owners. Government ought to consider what it will be like on the local level in the immediate aftermath of a big quake.

It's time that those running for office decide whether or not they are serious about emergency preparedness. They can let us know, and we can decide how to vote.

But there is one other realization that comes when you start to think about what it would be like without a Fire Department. This is also a pretty good analogy to our current system for delivering health care. Perhaps we could stop thinking about that bugaboo "socialized medicine" and think about creating a minimal layer of health care akin to a utility. What if we were to create a system for people who don't have a thousand dollars a month to pay on health insurance? They could go to our own local equivalent of the British National Health Service without having to worry about receiving a bill for ten thousand dollars in the mail.

Can you imagine having a private fire department every few miles and the prospect of getting a bill for that same ten thousand dollars if they had to come and put out your house fire? That's what we have for the medically uninsured right now. If you think of the Fire Department as an essential utility, then we are missing another essential utility that would do the advance preparation for earthquakes and major heat events. As we've heard from another of our CityWatch writers, the city's emergency management department is badly underfunded, and nobody seems to be doing anything about it.

(Bob Gelfand writes on science, culture, and politics for CityWatch. He can be reached at amrep535@sbcglobal.net.)