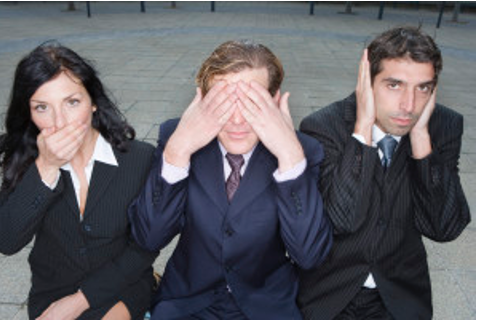 GELFAND’S WORLD - George Orwell already said it: "Sometimes the first duty of intelligent men is the restatement of the obvious."

Now that city election season is upon us, it's time for some of that restatement. In this case, we are talking about candidates for mayor who are or have been members of the Los Angeles City Council or have otherwise served in city government.

The question: How Could They Not Have Known About the Corruption on Their Own Council?

Right now, there are 3 current and former members of the Los Angeles City Council who are indicted on federal charges or have just finished serving time on federal charges. Two out of the three got in trouble due to their involvement in planning and land use issues. There is a lot of money and lots of favors that can come your way as a Councilman if you let it be known that your hand is out.

The problem has been the actions of the City Council's Planning and Land Use Management (PLUM) committee. This is where bad actions go to be ratified and then sent to the whole City Council. It can't have been invisible that some PLUM committee actions are motivated by favoritism, particularly when it comes to members of the council who are most active in fundraising and are willing to stretch their ethical boundaries that little bit that is required.

The problem is that the rest of the City Council has gone along with decisions coming from this corrupt committee and its corrupt members. They have voted for motions coming out of that committee in near unanimity. They should have been protesting and voting No all along.

But instead, they have been voting for each other's land use motions without argument for years.

And while they have been casting those votes, Councilman Englander pled guilty and did time. Councilman Huizar is up on literally dozens of charged crimes, all ready to be litigated when the whole thing goes to trial.

To repeat:  How is it possible that anybody on the City Council could be unaware of the corruption? Somehow, we are supposed to believe that they were all downstairs playing the piano.

And again -- how could the current City Attorney not be aware of that corruption? He ought to be fully aware of the way the City Council works, having been a member himself.

Yet they saw no evil, heard no evil, and spoke no evil.

Here's a current list of mayoral candidates from among those office holders:

Perhaps Mike Feuer, being a step removed from the council, has some excuse -- perhaps he has no immediate obligation to investigate and prosecute what has been going on. Perhaps when Feuer was on the City Council (1995 - 2001) it was clean as the new fallen snow. But the other guys are there now, and they voted on motion after motion that came out of that PLUM committee.

Being a current member of the L.A. City Council or any other office in city government should disqualify anyone from higher office. There may be one exception in the case of the city's Controller, who comes across as a reasonable guy, but for the others, it's going to be a harder job to claim honor and integrity.

The 100% rule and alternate explanations

One of our CityWatch contributors has pointed out in numerous stories that most motions before the City Council are passed by unanimous votes. This is particularly the case for land use issues, even though some of them would ordinarily be considered controversial or even contentious. Nevertheless, they sail right through. Our contributor has also pointed out that -- were this a knowing conspiracy to trade votes -- it would be a crime under state law. Since my colleague basically owns this story, I won't comment further on that argument other than to invite his comments below.

On the other hand, I can come up with an argument to suggest that this behavior is not necessarily knowing criminality on the part of the City Council, but rather represents the failure to assert moral leadership when it is most needed.

The argument based on moral laziness rather than criminality goes like this: Let's say you get elected to the City Council. It turns out that there is a tradition -- unwritten and mostly unspoken -- that City Council members leave each other alone when it comes to land use decisions within their respective districts. If you are the councilman from District 4, you have pretty much carte blanche when it comes to whether some zoning variance is recommended in your own district. They guy from District 5 won't contest your decision. Meanwhile, you understand that the way this game is played, you will leave District 5 alone.

This is almost certainly the case on the L.A. City Council, whether or not the votes also include that criminality that my colleague asserts.

So, there is an alternative explanation to that of  criminal conspiracy. It is simple game theory.

There are two ways of playing the game. The first is to go along to get along, as just described. The other way is to raise principled objections when a land use proposal comes up, even if it is from some other part of town. For example, there ought to be a large number of elected officials in both city and county governments who object to tearing down the Los Angeles County Museum of Art and rebuilding it above Wilshire Blvd. There should have been objections to several high-rise projects over the past few years. Some writers here on CityWatch would have liked to see objections to all the high-rise development in Hollywood, particularly those developments that interfere with the views of historic structures.

But resistance to bad development has been faint at best.

The problem for City Council members raising any of those objections is that it would have potentially inspired retaliatory actions by the council members whose decisions were being rebuffed. It might even have resulted in a more chaotic way of doing business in the City Council, one in which land use issues and zoning variations would be dealt with according to their merits but would also be subject to all the politicking that such things involve.

But there would also be an upside. Principled arguments would allow for legitimate ethical objections to come out into the open.

The failure to make such objections when they are indicated is simple moral laxity. It's the failure to insist that our governing system be carried out in an ethical manner.

Sure, the failure to object when it is indicated has a certain political advantage, and presumably makes for a calmer way of doing business in each City Council District. The fact that things are calmer because the individual City Council representative is the de facto dictator over land use issues is the downside.

And in any case, nobody on the City Council who has played the game should be considered as a candidate for mayor, because that game involved the intentional failure to provide ethical and moral leadership when it was most needed. And they have all played the game.

By the way, there is an analogous argument that applies to the current mayor, but we will leave that for another time, because he is not in the race for reelection.

Lest we forget: The Seabreeze Scandal

A while back, a developer named Leung wanted to build a development and figured he ought to sew up political support. He got some of his employees to make donations to public figures and quietly paid them back.  This is, plainly, the laundering of money in the use of political contributions, and it is quite illegal. Leung took a plea. Meanwhile, the $600,000 he donated to local politicians continued to pollute the ethical pool. I note that when I asked about whether a donation had been returned (I asked in public, at a neighborhood council meeting), I got blown off with a non-answer. I'm still waiting for Ryan to answer the question. That story has been covered in detail by another CityWatch writer.

Anyway, here is the list of elected officials who received donations in the Seabreeze case:

Mitch Englander (did time on a different matter)

Eric Garcetti (currently mayor and nominee for Ambassador to India)

George Orwell got it right on a lot of things. We need to restate the obvious here. Anybody and everybody on the Los Angeles City Council who has been voting routinely for matters without thought to the ethics is not somebody we should want as our next mayor. Anybody on the L.A. City Council or in the office of City Attorney who has been looking the other way at gross corruption does not belong behind the mayor's desk.