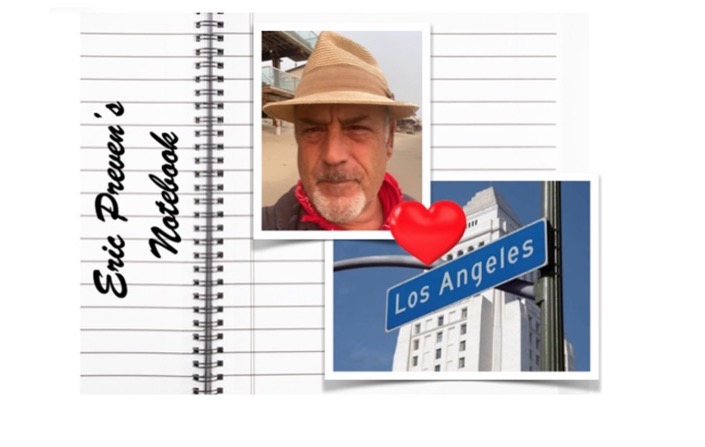 ERIC PREVEN’S NOTEBOOK - Hoteliers were out in force and slapped back a frothy plan to require hotels to house the homeless.

There was a lot of manufactured drama and a packed house at the John Ferraro Council Chambers.

"Don’t pick a fight with a comedian, they are quicker than we are" Chuck Todd reminded on Meet the Press Sunday.  Stuart Waldman, of the Valley Industry Commerce Alliance, has frequently encountered slapdowns on Twitter, but on Friday, he seemed to know exactly what buttons to push to get what he wanted.

He said, there was no economic data, no information, about the cost, about how much the city is going to pay, at what rate? If someone doesn't leave the hotel as scheduled the city keeps on paying. There is no source of funding, "hotels did not cause the homeless problem, and are not the solution."  The crowd went wild.

Waldman was aroused, "Hotels fund everything in the city. It will cost a fortune if you don't put this on the ballot."

And that's exactly what Nury Martinez et al did.  The matter will eventually be on the ballot alongside:

In the meantime, our local Project Room Key Contract with Sportsmen's Lodge Hotel in Studio City is coming under renewed scrutiny.

We'll eventually get the information, but hats off to Paul Krekorian, who cleverly left Raman of CD4 holding the bag for Related Companies and Richard Weintraub's new watering hole. Weintraub, apparently retained an investment in Sportsmen's Landing after sliding out disingenuously several years ago.

He wanted to join Cedillo, in vapid congratulations / attack on State Senator, Scott Weiner of San Francisco, who keeps pushing the 'stay open to 4am' bill, "Why would he continue to push a bill... for people who can't drink enough by 4am and need "options."

The hotel industry adores late-night reveling, so there was a bit of an awkward moment. Let's move forward.

Monica Rodriguez had the big closer... theydies and gentlethems, "the first-ever youth development department" in the City of Los Angeles.

Along with the new department, she introduce the youth council, created by the city council. 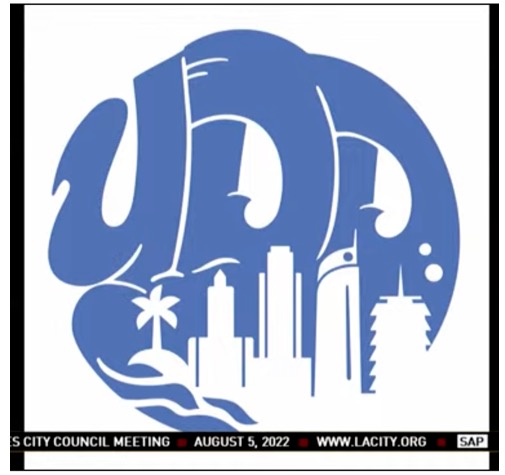 She thanked the youth for serving and unveiled their new logo.  Councilmember Martinez capped the moment, "One day you can all replace us on the City Council."

The City Council reviewed the case of   Laura Montilla v. City of Los Angeles et al. in closed session a couple of weeks ago.

Her story alleges illegal action and emotional and physical abuse committed by the LAPD.  She posted her detailed experience on her Instagram. The story linked here is her word-for-word testimony Twitter thread.  The City Council rejected her offer of settlement.

When a member of the public, who follows legal settlements, asked, "how much was proposed?" The answer was, as it always is, "none of your business, Mr. Preven."

To wit, "Well, the taxpayers are covering any settlement, so... please disclose."

It is hard to believe that the City of Los Angeles is in meaningful compliance with the Brown Act when it reviews and votes on legal settlements as they do.

The council's practice, like so many of its practices, is contorted beyond recognition.

Avak Keohtian, the mastermind of scheduling protocol (and malfeasance) at City Hall posts the possible settlements as items for closed session. Then, at the appropriate moment, Paul Krekorian jumps up to clink a glass and waive the need for any closed session, unless (he says disingenuously) any members have questions.  Then, typically, the council votes in lockstep with the city attorney's recommendations that are recommended by Paul Krekorian right out in open session. Krekorian also sits on the claims board as the council president's designee to minimize any unwanted scrutiny of these decisions.

If the council agrees to pay ONE million dollars in settlement, as an example, the city clerk staffer reads the city attorney's recommendation into the record. That information comes out for the first time in this way and the writing about it is never posted until much later when the meeting is over.  The settlement details are never pre-revealed in committee, where comments are welcome.

In fact, the first time the public is exposed to the actual financial terms of a proposed settlement in City Hall is one second before the council votes on them.

In the old days, when the inhibitory mask requirement was not preventing critics from doing their job, this was the moment that was often marked by me, jumping up and down demanding that my request to speak be honored... "before you vote."

By contrast, the County of Los Angeles does provide information about legal settlements that they are planning to vote on. It's surprising because the Board refuses to open Skip Miller's Legal bill Kimono following his recommendation that we pay Sachi Hamai the former CEO, $1.5M because his (other) client, Alex Villanueva was allegedly abusive toward Hamai, in his successful effort to get her to step down from the United Way board that Mr. Ridley-Thomas -- I digress.

The county Legal Settlements for Tuesday are posted and announced with quite a lot of information, including short descriptions of what went wrong.  In the good old days, Supervisor Gloria Molina forced county counsel to get the departments to post corrective action plans.

These days, not so much.  Of the six settlements on Tuesday, only one had a corrective action plan:  "Supervisors have been briefed and encouraged to make several unannounced visits to inmate housing areas under their supervision in an effort to ensure staff is following all policies and procedures." In common parlance, I'd call that an 'empty bag with a hole in it" but still, it's an effort.

$450,000 for an excessive force claim on Sheriff's Department deputies.

$550,000 for an automobile accident involving a Sheriff's Department employee

$536,999 for an automobile accident involving a Department of Public Works employee (county spent over $300,000 fighting)

$300,000 for deliberate indifference to safety needs by staff of Department of Health Services' and Sheriff jail staff at Men's Central Jail.

The City's Legal Settlements are never posted on the agenda until just before the council votes.

STOP:  If the council has the clerk read the amount into the record, what will prevent the council from taking public comment before voting?

Nothing.  The city council's practice of NOT going into closed session constitutes a substantial change - it's very different being out in the open, or back in the vault - and when the city staffer does finally read the announcement of the terms, it constitutes another substantial change, the public has never heard it before.

The public should be provided in that moment of revelation, an opportunity to speak.  Even if only to rail on about Skip Miller or Covington and Burling!

When the City council denies any comments on the recommendations, the 'before or during consideration' promise of the Brown Act is broken.

Kudos to the City Attorney and Paul Krekorian for running such an effective scam in broad daylight for so long.

Step out of the vehicle.

I read that India is going to take part in military exercises near its disputed border with China in October.  The drills will take place as part of the 18th edition of an annual joint exercise known as "Yudh Abhyas" or "war practice.

That phrasing reminded me of The Art of War by Sun Tzu ("Master Sun") a Chinese military treatise from the 5th century BC that is kept by the bedside of many great warriors and scoundrels.  Much of the text is about how to outsmart one's opponent.

Relations may be strained between India and China and a Department of Defense spokesperson told CNN last week that our partnership with India was "one of the most important elements of our shared vision for a free and open Indo-Pacific region."

So, shouldn't we have a U.S. ambassador over in India already?

"Sir, you're disrupting the meeting."

The first of the thirteen chapters in The Art of War is about planning and 'first calculations.'  Eric Garcetti, whose ambassador nomination card seems to have been lost by the Senate clerk, would be wise to skip ahead to chapter eight of his bedside copy that's all about '"shifting circumstances" and contingencies.

I asked one Angeleno, who frequently fumes over Garcetti's ability to manipulate the Los Angeles Times,  "Do you think Biden will push Garcetti through with a recess appointment?"

A recess appointment under Article II, Section 2, Clause 3 of the Constitution is an alternative method of appointing officials that allows the temporary filling of offices during periods when the Senate is not in session.

It's a preferred technique among various naval intelligence officers and others with excessive baggage, who might otherwise miss their flight.

In December of 2010, the White House announced that President Obama would make several recess appointments during his vacation in Hawaii. The maneuver provided an opportunity to sidestep congressional holds on his appointments and usher in nominees for a period of one year.

Republicans had objected to Obama's picks for deputy attorney general (questions about the nominee's views on terrorism) and ambassadors to Syria (concern about Bashar al-Assad and Hezbollah), and Turkey (over the nominee showing a lack of "enthusiasm or energy" when it comes to pushing for "greater respect for human rights and progress toward democracy.") Even Democratic Senators held up the president's pick for ambassador to Azerbaijan over the administration's opposition to a Congressional resolution condemning the 1915 Armenian genocide.

It's nice that Joe Biden finally got that one done, 12 years later.  Chuck Todd said, on Meet the Press, that last week, was the best week of his entire presidency, and if the rollout of good news does not improve his approval ratings, nothing will.

L.A. on the Record — the Times' local elections newsletter has not probed deeply into a recess appointment strategy. Times coverage on Saturday consisted of the same seventeen-word post that has been flying for weeks:  "Who’s running the city? Still Eric Garcetti. His confirmation as Ambassador of India awaits a Senate vote."

I asked the disgruntled Angeleno, "Could a recess appointment be the solution to Eric Garcetti's problem?"

"Absolutely f*#king not" he said, "They should just make Garcetti an ambassador to a country that doesn't matter.  Some small island nation. Not TAIWAN."

He'd still have to get by the senate.

The Green New Deal Goes Local.  What Does That Mean?