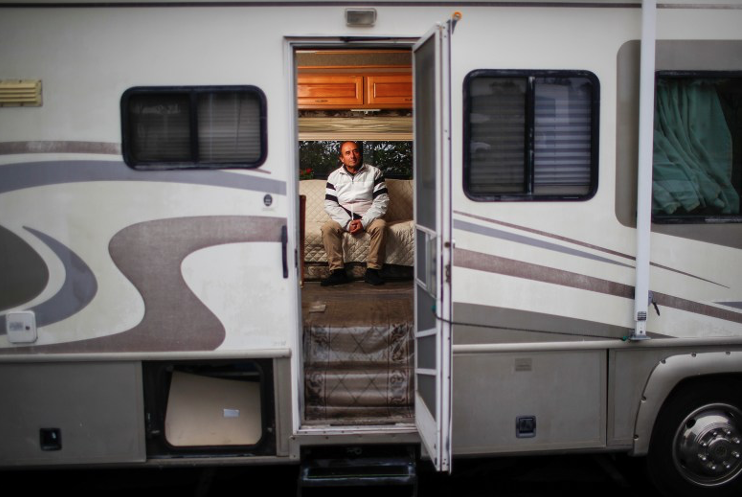 The analysis by the Ludwig Institute for Shared Economic Prosperity, an organization focused on studying the economic well-being of middle and lower-income Americans, found 25.7% of California workers are functionally unemployed, meaning they are seeking, but unable to find, full-time employment paying above the poverty level. That’s compared to the state’s 7.5% unemployment rate.

“Policy leaders, by these headlines and statistics, have been deluded into thinking things are better off than they are,” said LISEP chairman Gene Ludwig, who served as U.S. Comptroller of the Currency under President Bill Clinton.

The organization’s new, more inclusive analysis is part of a broader movement to revamp outdated methods of gauging poverty and unemployment. The chair of the Federal Reserve, Jerome H. Powell, wrote in February that “published unemployment rates during COVID have dramatically understated the deterioration in the labor market.” And a report released earlier this year from United Ways of California, an antipoverty advocacy organization, used a “real cost measure” to estimate that 3.5 million working households in the state don’t make enough to meet their most basic necessities.

For Ludwig, the problem comes down to the government’s current definition of employed. The Federal Bureau of Labor Statistics defines a person as employed if that person works at least 1 hour during its 7-day survey period.

“You were counted as employed, even if you were desperate to have a full-time job,” Ludwig said.

To capture a more detailed view of the functionally unemployed, LISEP researchers included anyone unemployed, those working part-time but seeking full-time employment and people making below $20,000.

Luis Philipe Ruiz Gonzalez is one of those desperate for a full-time job.

After weathering the pandemic broke and living out of a motor home with his wife, the 66-year-old applied without success for a number of jobs, including at SolarCity and San Mateo County Health.

Luis Philipe Ruiz Gonzalez inside of his RV in San Mateo on Nov. 1, 2021. Ruiz Gonzalez lived in the RV with his wife during the pandemic. Nhat V. Meyer/Bay Area News Group

In August, he landed a part-time job delivering paint up and down the San Francisco Peninsula 7 hours a day from Tuesday to Friday. That month, he and his wife moved into his son’s old apartment, with half the rent paid by his son, a personal trainer.

“I am happy because I am working part time,” said Gonzalez, “but the problem is income, it’s not enough to survive.”

While Gonzalez likes the paint company, which pays him $21 an hour, rent takes half of his wages and the rest doesn’t stave off pangs of hunger at night.

“When you are a partial employee,” he said, “you can’t survive.”

California’s unemployment rate hit a high of 16.3% in May 2020 and the state has recovered 63.5% of jobs lost due to the pandemic. But Gonzalez’s struggle to find enough work is not reflected by California’s standard employment measurements, making him functionally unemployed.

“It is worth examining how we capture and report these figures,” said Alissa Anderson, senior policy analyst at the California Budget & Policy Center, “because they affect how policy choices are made and support is provided for families and households.”

LISEP researchers also found that women had a functional unemployment rate nearly 9% higher than men in September 2021. It’s a stark comparison to the .5% lower unemployment rate among women offered by the Bureau of Labor Statistics.

Even LISEP’s functional unemployment numbers are a low estimate. While researchers used $20,000 as the poverty line, the Bay Area’s high rents require that some familiesmake over $100,000 to stay afloat, according to United Ways of California.

“We are headed down a path that, if we don’t deal with these problems,” Ludwig said, “we will see serious social unrest.”

This article is part of the California Divide, a collaboration among newsrooms examining income inequality and economic survival in California. 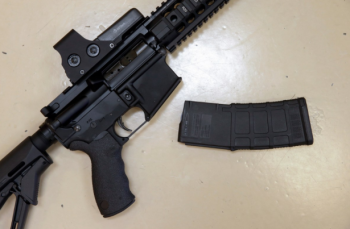 GUN CONTROL - As California tries to crack down on crime, it secured a sizable victory for its strict gun control laws on Tuesday. 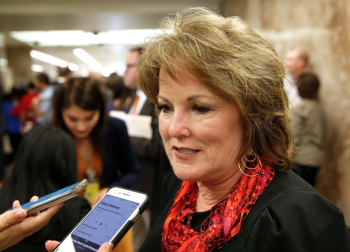 CALIFORNIA POLITICS - During the most recent legislative session in California, at least three senators on powerful environmental and finance committees derived significant income from fossil fuel companies, according to financial disclosures obtained by Capital & Main. 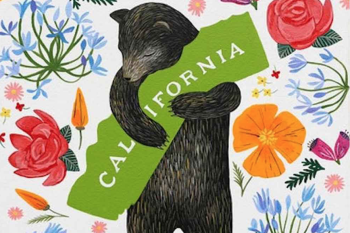 Thanks For Being Obsessed With Us, America

Thank you, America, for always keeping California in your thoughts. 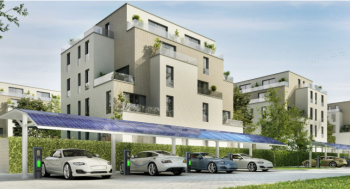 COMMENTARY - With this month’s U.N. climate conference failing to achieve key agreements that will limit global heating to the crucial 1.5° C goal, it’s vital that California step up our climate leadership. 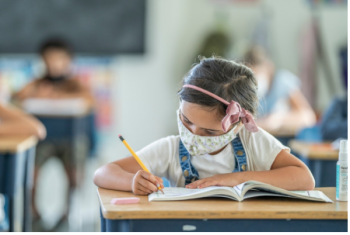 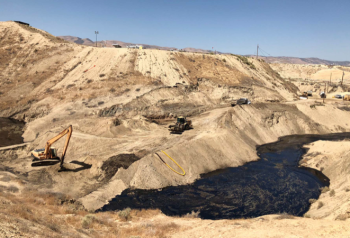 With California’s OK, Chevron Is Selling Oil From an Illegal Spill

ENVIRONMENT WATCH - Deep in the oil fields of western Kern County, a little northwest of the century-old town of McKittrick, hundreds of thousands of gallons of crude oil and wastewater filled with toxic chemicals have been seeping out of the ground for two years, in an area where companies operate hundreds of wells. 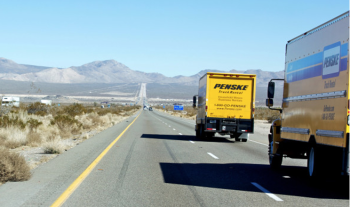 How To Plan the Perfect California Exit 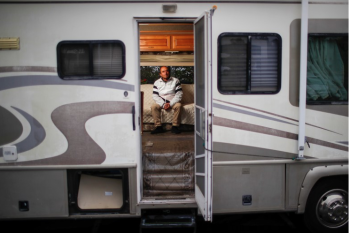 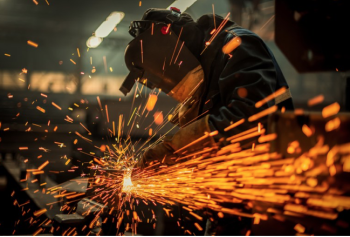 California’s High Unemployment Rate May Be Too Low

CALIF JOB FORECAST - Each month, federal and state officials release employment data for the preceding month, basically telling us how many Californians are employed and how many aren’t. 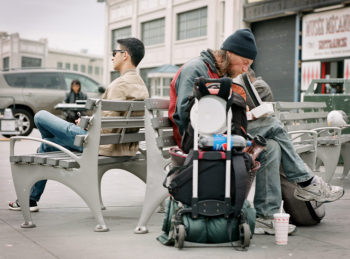 POLITICS - “I just took [my son] to our local Walgreens to buy him a toy. While there, a man shoved past me so firmly that he sent me into the shelving. Then he proceeded to fill a brown paper bag with Halloween candy and waltzed out of the store. This is one of five Walgreens stores in SF that will be closing in the next two months, in part because of rampant theft. And our city leaders all keep insisting crime is down.” 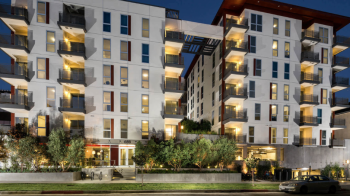 HOUSING CRISIS - The California Apartment Association, the landlord lobbying group, is one of the most powerful organizations in California. 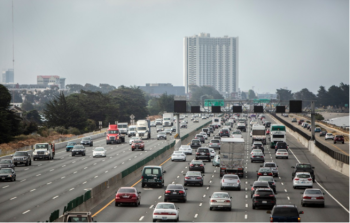 CLIMATE WATCH - Nations convening at the United Nations climate conference pledged today to end the sale of new gasoline-powered cars in major markets by 2035 and globally by 2040, mirroring California’s plans. 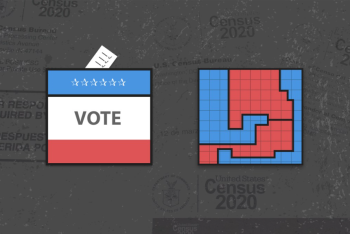 Where Are The Flashpoints in California Redistricting?

REDISTRICTING - A congressional map that splits Long Beach into two. 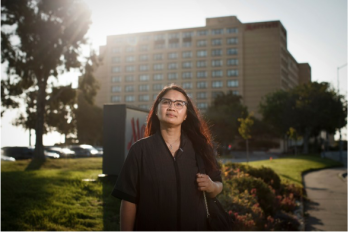 Few Working Poor Get To Vote On Unions. Can California Change That?

STATE OF THE UNIONS - Shirley Reyes tucked herself next to her 17-year-old son on the couch, peppering him with questions about unions as he googled the cost and benefits of collective bargaining on his phone. 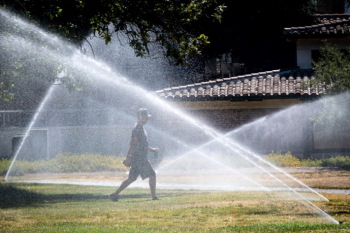 As California’s drought deepens, water use drops only 1.8%