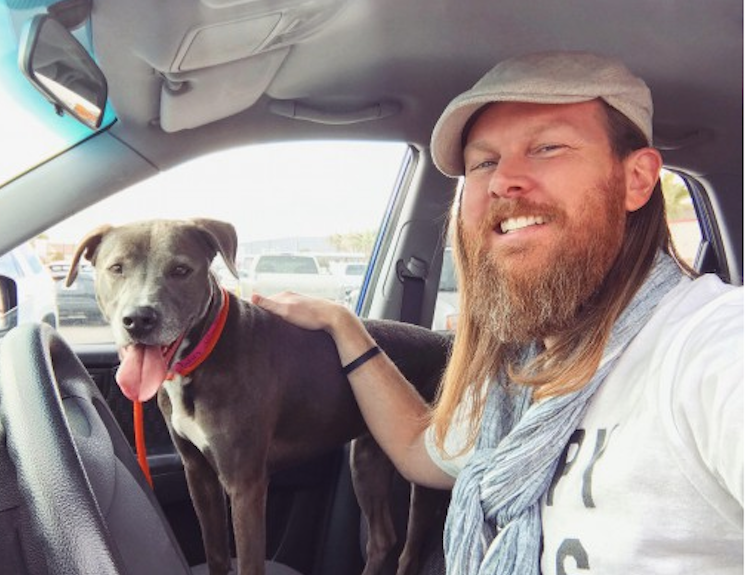 ANIMAL WATCH - Pit Bull rescuer/’No Kill” activist Luke Westerman, a former "sidekick" of indicted Los Angeles County dog trainer Steffen Baldwin, was fired as Executive Director of the Humane Society of El Paso the day after he was arrested and booked into jail on 19 charges of fraud and grand theft in Ohio.

Westerman had been living in El Paso for almost a year when he was formally charged by a grand jury in Ohio. A warrant for his arrest was issued in January of 2019 on charges of theft and securities violations.

“Westerman was indicted Dec. 27 on 16 counts of unlawful securities practices, two counts of grand theft and one count of theft from a person in a protected class, according to an indictment released last week by the Franklin County Prosecutor’s Office in Ohio,” the El Paso Timesreports.

Although he allegedly committed fraud beginning in 2010, the indictment charges him in cases that occurred between 2013 and 2018, the report indicates.

Westerman turned himself in and pleaded not guilty to all charges against him, then was released on $50,000 bail.

LUKE WESTERMAN AND L.A.’s STEFFEN BALDWIN – “Birds of a feather…”

Westerman has a past closely intertwined with self-proclaimed Pit Bull trainer/behaviorist Steffen Baldwin, who is also in Ohio on charges, many of which involve animal cruelty. The bottom line for both was money and fame.

Baldwin, a co-founder of the Underdog Alliance, was adored by rescuers who sent “last-chance” Pit Bulls from all over the country to his “Save Them Dog Training” program--for a hefty ‘donation,’ believing his hype that he could miraculously make dangerous dogs into adoptable pets.

He had apparently also charmed Los Angeles Animal Services’ then-GM Brenda Barnette; because, on August 10, 2018, at the opening of a dog park for pets of homeless humans at the Weingart Center on Skid Row, both Barnette and Baldwin were present and he was interviewed by the Los Angeles Times as the Center’s official dog trainer.

Non-profit rescue groups reported paying from $4,000 to $7,000 for his 8-week training program in Acton, CA, where many of the dogs were reportedly euthanized, rather than rehabilitated.

THE POWER OF PERSUASION

Westerman left Ohio to become the executive director of the Humane Society of El Paso, based on qualifications that were later called into question, but his powers of persuasion were so seductive that Dr. Mary E. Gonzalez, TX State Rep (HD-75- El Paso County) tweeted on May 29, 2018:

“Empowered by the work at the [El Paso] Humane Society] and their fearless and compassionate leader Luke Westerman.  They are working to make El Paso the largest no-kill city in the world.  We can do it El Paso!”

One year later, he left El Paso because he was due in court in Ohio for allegedly swindling $700,000 from Ohio citizens over the last eight years.

Dogsbite.org reports in an update that:

“On October 4, 2021, Jeffery Luke Westerman pleaded guilty to 19 securities-related fraud and theft charges during a hearing in the Franklin County Court of Common Pleas. Westerman is scheduled to be sentenced on November 18. The prosecution and defense jointly recommended to the Court a sentence of five years parole ("community control") and full restitution in the amount of $1,096,656.09.”

Baldwin’s case is far from resolved. As the result of a “supersede indictment" released by the Ohio Grand Jury on March 29, 2021, 11-misdemeanor animal cruelty counts against Baldwin that were dropped were re-filed as felony animal cruelty charges. (The other two of the 13 had been originally filed as felonies.)

In addition, the 11 were left in the original document as misdemeanors, (possibly to allow for potential appeal.) This resulted in a total of 53 charges, 39 of which are felonies.

HOW DID THE ‘HUMANE’ LEADERS GET IT SO WRONG?

How much do the high-profile promoters of animal welfare, like Best Friends Animal Society and Maddie’s Fund really know about the activists they claim to support and commend as a part of the lucrative “No Kill” movement?

If Steffen Baldwin and Luke Westerman are examples, it appears the response to that question would be “not much.”  Best Friends was lavish in its endorsement and  praise for both.

But, equally important, why don’t they care? Is "No Kill" really about the animals or just guaranteeing a continuing stream of income from donations?

A MATCH MADE IN HEAVEN (OR SOMEWHERE ELSE)

Westerman and Steffan Baldwin were partners in the Ohioans Against Breed Specific Legislation effort.

According to a commentary by Scorched Earth,  a public announcement of a collaboration between Luke Westerman and Steffen Baldwin to raise $5,000,000 was made in 2015:  It read:

Ohioans Against Breed Discrimination (OABD) is the brainchild of Steffen Baldwin and Luke Westerman.  Those who read this blog will be familiar with Baldwin's name.  For those just catching up you can click here and here for more on Baldwin. Baldwin has joined with Luke Westerman, a businessman and a self proclaimed philanthropist and good Samaritan to form OABD.

These two, along with their wives/significant others, and Dana Pannella an Akron lawyer specializing in animal law, plan to raise five million dollars to promote their ballot initiative for a constitutional amendment that would prohibit any city or county in the state of Ohio from enacting or enforcing any breed specific legislation.

Scorched Earth asks, “Five million dollars to "educate" the peaceful public about what is in their best interests as determined by breed specific advocates?”

Before suddenly deciding to dedicate his full efforts to animals by applying for the position of Executive Director of El Paso Humane, Westerman claims he ran an investment firm in Columbus, Ohio called "Solomon Global Holdings." (More on that later.)  He was also a principle in the Westerman Family Foundation, which claimed a net worth of $7.5 million and was headed by his wife, Alisha.

A KFOX investigative report states that this foundation is neither listed with the IRS nor the State. (It is interesting that Alisha Westerman, who is shown as the Director of the Foundation, has not been mentioned in any of the charges. Perhaps that is because the $7.5 million in revenue never existed.)

SAVING PICKLES – HOW THE SCHEME WORKS!

A photo of a beaming Westerman with a grey Pit Bull was purported to be a “hurricane survivor”  was followed by his plea for “small donations” to pay for Steffen Baldwin to “get her back to the dog she once was.”

I'm reaching out today to ask for your help. The Humane Society of El Paso recently took in a dog named Pickles - a two time hurricane survivor who experienced great stress, anxiety and homelessness during and after these devastating storms.

She's been living in shelters since the summer and has developed a fear of other dogs and strangers as a result. We'd like to get her out of the shelter and into a calm environment where she can decompress and get back to neutral.

Because of all she's been through she also needs a behaviorist/trainer to work with her to help her get back to the dog she once was before all the tragedy that ensued in her life. That expert behaviorist is Steffen Baldwin in Los Angeles who I believe is absolutely the best in the busIness.

Steffen has agreed to take Pickles into his home and work with her for the next 8-12 weeks to help her relax, regain her confidence and to help her relearn how to interact with other dogs and strangers.

Pickles' life is absolutely worth it. So we're asking you to please consider making a small donation to help Pickles get the new lease on life that she so desperately needs and deserves.

Pickles is eternally grateful to you - as are we!

“My goal in life is simple… to help as many people and animals as possible. I wake up in the morning and go to bed at night with that conviction burning inside of me. That’s it.” – Luke Westerman

In 2017, Westerman left Ohio to become the executive director of the Humane Society of El Paso, or did he leave because his clients were planning to press charges at Solomon Holdings?

In hindsight, a member of the Board of Directors who supported his hiring admitted his background should have been more thoroughly investigated as "major misrepresentations" were exposed.  Three Board members resigned over this issue.

Greg Leach, a Columbus financial investigator, told ABC 6 / FOX 28 that he once worked as a consultant to Westerman's start-up venture capital firm beginning in 2014 — but quickly realized Westerman's intentions were not good.”

His employees at Solomon Holding Group of Columbus claimed that they had invested personal money and savings, which were never returned to them and that they were unpaid and suffering from anxiety and the economic devastation,.

"Luke, on the other hand, had no problems living in this nice house in Granville, paying for valet parking down at the Chase Office Tower, and spending money like it's water," Leach  said.

Leach told FOX28 he is glad his former consulting employer is now seeing the justice system dig into his past. "Whoever he touched was affected by some sort of unethical behavior,"