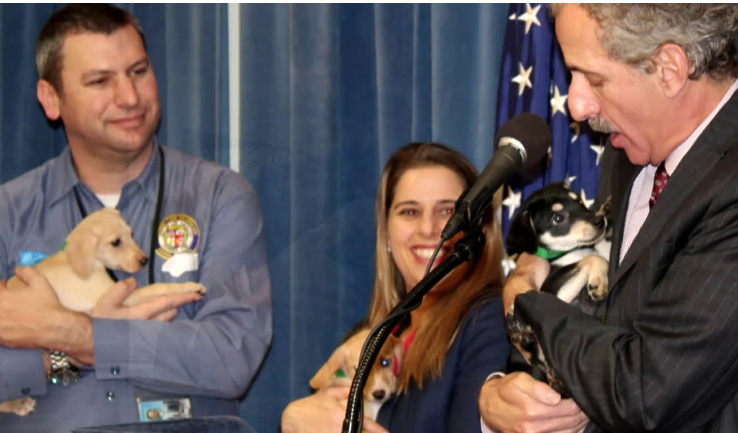 in a repeat performance of his 2019 puppy scam warning -- that con-artists selling puppies are becoming more clever and complaints are increasing, and Angelenos should adopt a holiday pet from the Los Angeles City Animal Services shelters.

That may be great advice if you are looking for a four to ten-year-old Pit Bull as a pet for your children, but otherwise you may be out of luck at LAAS shelters! (See LAAS "adoptable pet search.") Apparently Feuer has not recently visited an LA City shelter.

Feuer cannot plead innocence in allowing puppy scams to become the only hope for Californians—and especially Angelenos—whose child has been persuaded that a puppy is all they want for Christmas (or whatever religious holiday they observe this time of year.)

But, how much of L.A.'s addiction to pets is motivated by the hype generated by Brenda Barnette, a former dog breeder, and the close -- often financial donor -- relationship between Los Angeles Animal Services, Mayor Eric Garcetti and other City officials (including Mike Feuer, whose approval is required on most actions of the City) and the major industries that promote/provide services for pets?  According to the Pet Industry Market Size & Ownership Statistics - American Pet Products industry, in 2019, $95.7 billion was spent on pets in the U.S.

Feuer cannot claim ignorance about the repercussions of the pet shop bans that are purportedly driving parents and puppy seekers to internet sources. He has served as Los Angeles City Attorney since July, 2013, and his office has approved every effort to destroy local and statewide pet stores and thus eliminating local, highly regulated Los Angeles businesses—rather than enforce existing humane laws when necessary.

Ironically, both he and Councilman Paul Koretz served terms in the California State Assembly which developed some of the strictest consumer protection laws in the U.S. for pet shops and breeders under the (Lockyer-Polanco-Farr Pet Protection Act.)  But a new CA pet shop ban specifically exempts the sales of rescue and shelter dogs in “pet shops” from those protections.

"FEARS OF A BLACK MARKET"

In an National Public Radio (NPR) broadcast on Nov. 1, 2017, "Fears of a Black Market After California Bans Some Commercial Breeding,"  Gloria Hillard discusses the celebration among politicians and animal advocates at the signing by then-Governor Jerry Brown of the last in a series of pet store bans introduced from Los Angeles to Sacramento to stop legitimate pet stores from "selling animals from commercial breeders."

She pointed out that while "advocates claim it will stop needless suffering by puppies, kittens and rabbits bred for sale," critics say it will, ". . .hurt pet store owners and force consumers to go underground."

California then became the first state to ban pet stores to require that all dogs, cats and rabbits sold in the "new model" pet stores would come from shelters, not commercial breeders, thanks to the new law. Animal advocates say it will reduce what they claim is the needless suffering of animals like puppies, kittens, and rabbits bred for sale.

The law went into effect in January 2019, although it was vigorously opposed by the American Kennel Club, [[[   American Kennel Club (akc.org) ]]] commercial breeders and the pet industry, which represents pet shops. They warned that "the law will make it more difficult for Californians to obtain dogs with desired characteristics (including those recommended for health reasons.)"

Ironically, individual breeders would still be able to sell to customers unimpeded and with no specific regulations. (Was that an oversight or intentional – Los Angeles has recently removed its kennel restrictions and increased the number of breeders' permits dramatically.)

In Los Angeles and other California cities, if anything is needed, it is closer scrutiny of the many backyard breeding operations that go unnoticed or ignored.

One legal analyst commented, "The State legislature, at the behest of many animal welfare “professionals,” has banned the sale of purebred puppies and kittens sourced from licensed and regulated breeders because of the perception that all commercial-operations are inhumane."

"Thus, these actions of the legislature and the City Attorney’s Office before it, have driven consumers to deal with underground breeders instead. For some reason, they think that an operation that is unlicensed and unregulated (and therefore not a “commercial” operation) is somehow guaranteed to treat their breeding stock humanely. The countless scammers that Mr. Feuer now warns us of are evidence of the insanity of that assumption."

Hillard interviewed the owner of a well-established and successful pet store, called "Puppy Heaven," who told her he obtains his puppies only from local, responsible breeders, and that "the new law will only drive the huge consumer demand online, to unregulated breeders outside California. . .People will still want to get puppies."

But rescue organizations said plenty of puppies and kittens are already available for adoption.

Hillard also interviewed the owner of a Los Angeles "rescue" pet shop, called "Barks 'n Bitches." On its website, the store calls itself "L.A.'s first HUMANE Pet Shop."  She said the owner was in the process of trying to place an adult 40-pound dog (which appeared to be a pit bull.)

An article on this trendy shop in 2015 stated that adoption fees ranged from $350 to $450, at that time, and all animals were taken from "high-kill" shelters.  However, 453 reviews on Yelp showed a rating of only "3."  Then in 2020, ABC7 aired a report, "LA pet shop closing months after video of employee tossing dog."

WAS A WARNING ABOUT PUPPY SCAMS TWO WEEKS BEFORE CHRISTMAS JUST A PHOTO-OP?

Certainly someone on Feurer's staff could have done a quick Google search and found the very comprehensive "Puppy Scams" list that would have warned the residents of Los Angeles well in advance of what to avoid in seeking a puppy.

He really didn't offer any new advice or education. By "clutching his pearls" and blaming scammers, many of which may be out of the country, he avoided taking any responsibility for enforcement or investigation because local laws do not have jurisdiction over the Internet.

WHY ARE ENTICING PUPPIES SHOWN AT "PUPPY SCAM" REPORTS BY THE CITY ATTORNEY?

Reports on crimes used to mislead and extort money for an animal that has been offered as a family pet should not be used for adoption events, where participants are laughing and fondling puppies, including the City Attorney.

All involved in this must grow up and take responsibility. The City is not in the dog-breeding business and City law states that pregnant animals will be spayed to reduce pet overpopulation and euthanasia.

It does not help that Brenda Barnette has twice attempted to change the rules about spaying pregnant animals so that puppies are born in the shelter.

Also,  “Why Did LAAS GM Barnette Try to Cover Up Death of Pregnant Shelter Dog, Snowball?”

TIME FOR MIKE FEUER TO ACT LIKE THE CITY ATTORNEY, NOT A VICTIM.

It has been 12 months since Feuer's last video appearance lamenting "puppy scamming." He provided no statistics and merely repeated a claim by the Better Business Bureau and said that his office received more complaints  than last year.

So tell us something we don't know! Like, what have you and GM Brenda Barnette have done between December 2019 and December 2020 to educate the residents and prospective pet owners in Los Angeles about how to avoid the anticipated increase in scammers at Christmas?

(Phyllis M. Daugherty is a contributor to CityWatch and a former LA City employee. She is currently employed by the U.S. Postal Service.) Prepped for CityWatch by Linda Abrams.