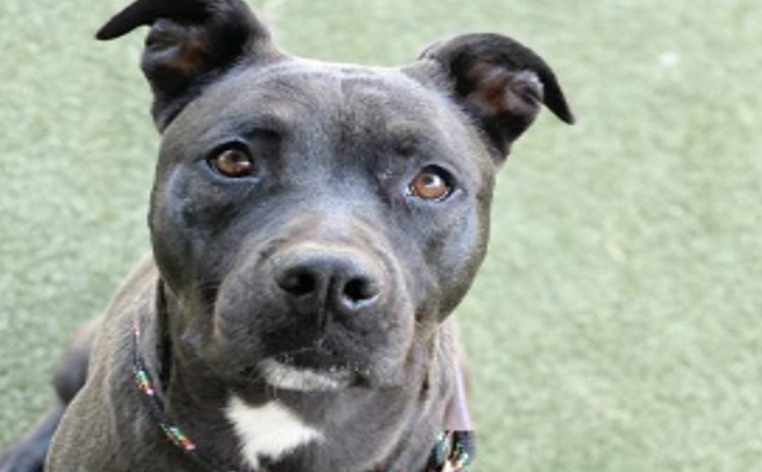 You can take one home during “Adopt-a-Dog” month for $25 each.

According to the American Animal Hospital Association (AHHA) in a 2019, report, “Pit bulls were responsible for the highest percentage of reported bites across all the studies (22.5%), followed by mixed breeds (21.2%), and German shepherds (17.8%). Mixed-breed dogs and pit bulls were found to have the highest relative risk of biting, as well as the highest average damage per bite."

Yet, knowing this and the record of horrifying attacks on LAAS adopters and fosters, Barnette--who recently enrolled Los Angeles City shelters in the AmericanPetsAlive" program-- still gives the specific assurance that these are “amazing dogs…who would make great workout partners, couch potato buddies, and who can bring a lot of love into your home. .Don’t rule out a larger breed dog when looking to adopt a four-legged friend to be a part of your family,” she concludes.

Barnette has no basis for these assurances to prospective adopters, since many of the “big” dogs in the shelter are strays or have a known history of prior aggression, which cannot just be wished away nor changed by “love.”

The Austin, TX, municipal shelter's Animal Advisory Commission explained that this would not affect a large number of animals, but members are asking the City to “make it easier for city animal shelters to euthanize animals deemed too dangerous to be adopted by the public.”

Commission member Jo Anne Norton explained, “There’s a small group (of dogs) that probably should not be offered for (rescue) because they’re just too dangerous to the public."

In October 2019, an ordinance was passed which prohibits Austin shelters from euthanizing an animal “without first giving two days’ notice to other shelters, previous owners and surrenderers, so they have the chance to claim the animal instead.”

Shortly after that change, in November, an employee at the Austin Animal Center was attacked and seriously bitten by an impounded American bulldog with “a prior history of biting and aggressive behavior.”

In response to that attack, the Animal Advisory Commission formed a work group which recommended an amendment, allowing an exception to the two-day rule when an animal bites a shelter employee or community member without provocation.

A later discussion involved adding an exception process in regard to the few animals that pose a danger to employee and public safety, “. . .without permitting previous owners or other shelters to claim the animals and proposed  giving shelters the ability to euthanize an animal for humane reasons or if an animal is seen as an immediate threat to others."

Norton also assured that this proposal would not interfere with the city’s No-Kill Implementation Plan. “We want to come up with a way to be fair to the dog, but to be safe and not put these animals in the public."

She said, "Out of the 18,841 dogs and cats taken into Austin animal shelters in 2019, the proposed exception would have applied to only three dogs."

CONTRAST BETWEEN AUSTIN AND THE CITY OF LOS ANGELES

While Austin has recently publicly expressed concern about the number of attacks by dogs with a previous history of aggression, Los Angeles General Manager Brenda Barnette and Mayor Eric Garcetti have turned the focus of the City to fundraising and donations.

Safety of animals and humans in the shelters had not even been a topic of discussion at any of the LA Animal Services Board of Commissioners meetings, and now there seems to be agreement to grant more favors to friends by "reconstituting" the West Valley Animal Shelter -- the second LA City shelter to not be utilized for safe keeping of lost, stray and unwanted animal.

BEWARE!  LA CITY ADOPTER ONLY MEET PETS AT THE TIME OF ADOPTION

Another reason (especially adopters inexperienced with Bully breeds) must beware of the City's lack of concern for safety during the "Big Dog" Adoption Event is that COVID-19 changes have precluded visiting dogs at the shelter and, after prospective adopters have become excited (and maybe involved their children) about either “saving a life” or getting a cheap dog ($25, plus a $20 dog license), the small print may have been ignored.

Would you marry someone before the first date?

Here is the process: Go to laanimalservices.com/adopt and identify an animal you would like to adopt (you are only allowed to ID one animal. You then call the 888- number and give the Animal ID # to the LAAS employee, who “will share all the information available on that animal.”

Will that include former attacks and, if so, why is it being offered for adoption? Or will it include former misbehavior which was because it had a bad childhood or an owner who mistreated it or which can be otherwise explained?

The instructions then say, “If you’re interested in moving forward with the adoption, LA Animal Services will take your information and schedule a pick-up appointment.” (Note that this presumes you are adopting this pet -- without meeting it.)

The one-hour appointment includes bringing in the animal (dog or cat) you selected for a brief introduction, making a decision and completing paperwork and payment.  According to Barnette’s statements at public meetings, if you don’t take that pet, you have to get in line again, i.e., call in about a photo on the LAAS website and start from the beginning.

(Note that you are discouraged from bringing your entire family by the final advisory on the LAAS adoption site that, “. . .due to City order in response to COVID-19, no more than 10 people are permitted in our facility at a time, which includes staff.”)

So, do you leave that day with a dog/cat you don’t really trust but with which your child has fallen in love? Or, one your spouse believes will be fine when it has a family? Do you leave it in the shelter, knowing that it may be two weeks (or more) before you can repeat this entire procedure?

Or, do you contact a “rescuer” from a site with a dog whose photo and description sounds perfect and you can meet it that day -- although the price (called a “donation” is considerably higher?)

Kylie is a black-and-white Pit Bull (“mixed breed) who was recently available at an LA City shelter. Kylie had a history in LA Animal Services’ shelters dating back to 2017 and was restricted to release to "rescues only." However, a video of her in a play yard was posted by volunteers and behavioral comments state that employees had no problems with the dog.

But the “rescue only” limitation indicates Kylie had either been declared "dangerous" or has a history which makes Barnette want to assure Kylie does not stay inside the city limits of Los Angeles. (“Rescue only" dogs can be taken by rescues to be re-homed outside the City limits or transported to some other state.)

A Public Records Act request revealed that Kylie was owned by a "transient" (homeless man) and she had attacked four persons upon his command, according to a report by LA Police Department. One of the victims who was identified suffered serious injuries to his left hand describe as "large, open wounds and fractured metacarpals.”

Less than two months later, and after an LA Animal Services’ hearing, the Pit Bull was released to the owner with restrictions that she be muzzled when in public or any place in contact with dogs or people.

Kylie was impounded again in 2019 because her owner was arrested. He had allegedly again commanded Kylie to attack another person, and that victim “had suffered puncture wounds from the bites and broken limbs from dog owner beating on him.” The victim was hospitalized, according to the report.

Although LA Animal Services shelter and field officers did not find Kylie aggressive when handling her, this is a dog that could then be re-adopted to a member of the public or a family by a "rescuer." She was apparently easy going UNTIL she heard a command which incited her to attack.

WHY WAS KYLIE OFFERED FOR ADOPTION TO ANYONE?

Even Ted Bundy, the notorious, charismatic, good-looking sociopath who confessed to raping and murdering 30 women, did not kill everyone he met. Some people really liked him, but certain individuals triggered a response in him that most people do not possess, and he viciously attacked and brutally took their lives.

Like Pit Bulls or other dogs that attack and maim, they often get along with, and exhibit apparent devotion to certain people, which is why attacks are a surprise. They can like someone--until they don't. Then the result can be deadly.

In a May 4, 2020,  a CityWatchLA  article, Dog-Bites Soar at LA Animal Services ... revealed that Assistant GM Tammy Watson announce the bad news at the LA Animal Services Board of Commissioners meeting that 94 dog bites/attacks occurred in LAAS animal shelters during 2019.

This was up from 59 in 2018 and is more than a 59% increase. The victims were the public, volunteers, and employees.

Following is an excerpt from the official stats compiled by Los Angeles Animal Services:

Many who believed the hype of “misunderstood” dogs have personally suffered irreversible damage, heartache and lifetime physical and emotional scars themselves or have watched their child or adored pet savagely mauled or killed. (See: Heroic LA Animal Control Officer Climbs through Window to Capture Pit Bull after Vicious Attack on Adopters)

WILL LOS ANGELES FOLLOW THE HUMANE APPROACH OF AUSTIN?

Kudos to Austin, TX! "No Kill" matters, but it must include the behavior of the dog toward humans and other animals, as well as the life of the dog.

Of course, a small dog can also bite. But it is much less likely to do serious harm than the massive, powerful jaws of an adult Pit Bull or other large-breed dog -- especially one with a history of bites or aggressive behavior that may be disclosed but explained away in order to meet a statistical "No Kill."

Because the known -- or unknown -- past behavior of any dog offered by LA Animal Services -- GM Barnette must be REQUIRED to be transparent in issuing  promotions for discounted pet-adoption events. A sensible warning must be an important part of any discussion of future behavior before someone is enticed to consider adoption of any animal -- and especially a "Big Dog."

Better yet, will GM Barnette follow the wisdom and compassion of Austin Animal Center leaders and recommend any dog with a serious history of aggression be euthanized before more employees, the public and their pets are endangered?  his could truly be a life-saving trend for all.