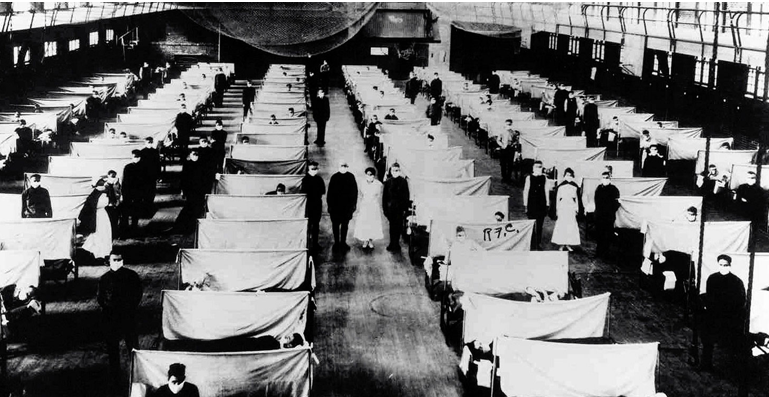 CORONA WATCH-Years of austerity underfunding by Clinton, Obama, Bush and Trump have allowed corporations to profit off our public health care system.

The underfunding has severely weakened the response to the COVID-19 crisis. Our public health agencies provide fine and vital human services. Since the 2008 Great Recession, however, they have lost 25% of their work force and now face this crisis without adequate resources. (Photo above: 1918 Spanish flu emergency facility.  All staff had facemasks and protective gowns.)

Congress recently injected $8.3 billion into our public health system, but only after the COVID-19 crisis arose. The U.S. has not invested needed funds in public health, however, even though we are flush with financial resources. Why should these agencies go begging for necessary funds and staff, and labor under serious financial constraints?

To understand the root causes of the present health crisis, we have to examine the policies of previous administrations, the Federal Reserve, and congressional Democrats and Republicans that have lavished the Pentagon and Wall Street with some $40 trillion in direct funding and bailouts over the past 30 years. There’s been no austerity there. There is a direct funding relationship between the government’s assault on public health agencies and the money thrown at the insatiable Pentagon war machine that feeds corporate war profiteers. The Pentagon’s riches are built upon the public health system’s poverty.

The War Resisters League (WRL) has calculated total U.S. funding to feed that war machine from 2001-2019 that includes interest on the debt related to past wars, Veterans Affairs and Homeland Security. It’s $24.3 trillion, or $70,900 per person based on our population of 330 million; Jackson County’s share is $16.1 billion. The next time we are told that we cannot afford Medicare for All and fully fund our public health system, think about the mind-boggling amount of money that has fueled destructive wars that always benefit the ruling class.

After the Great Recession crash of 2008, the Fed provided $16 trillion to banks and corporations. Obama, in his first two years of office, had large Democratic majorities in the House (256-178) and Senate (59-41). Yet, he and Congress bailed out Wall Street, not Main Street. Millions of Americans lost their homes and lost their jobs; but 95% of new national income during Obama’s first term went to the nation’s top 0.1 percent, and corporate profits rose to the highest level since 1929. Obama was elected on a mandate of change with more votes than any presidential candidate in history. But he did not mount a modern New Deal to help the 99%. Instead, he bailed out the very class that created and profited from the crisis — even as it glorified free enterprise and the market.

These are the historical roots of our deepening inequality and savage cuts to public health services. These cuts have expanded under Trump, proving yet again that Democrats and Republicans are wings on the same bird of prey when it comes to not serving the health needs of all Americans. The New York Times’ Ginia Bellafante captured this well: “Broad-scale emergencies never fail to reveal the fault lines in the American class system.”

U.S. banks, Wall Street and the airlines — crying for $50 billion despite using 96% of their cash over the past decade to buy back stocks — now expect the taxpayers to help. Boeing, our largest airplane manufacturer and a leading military contractor, is asking for $60 billion. Ralph Nader reminds us that the “same CEO fat cats who dumped seven trillion dollars of profits into [these] unproductive” stock buybacks now want the rest of us to aid their “debt-ridden companies.”

According to artist-political economist Rob Urie, we were warned that the Obama administration’s post-2008 bailouts would “make rich people rich again” but not “save the economy.” Now those who were bailed out are again telling us that the federal government “has to bail out corporations and the rich” to save “the economy.” It is in trouble, but “because of the fragility created to benefit corporations and the rich.” (Counterpunch, March 20, 2020)

We can respond to the COVID-19 crisis by stopping the ruling corporate class — whose reckless and criminal behavior fueled the 2008 Great Recession — from enriching itself again as our public health system breaks down. Or, as Jonathan Cook writes, we can “go back to business as usual — until the next crisis — rewarding the arms manufacturers, the billionaire owners of the media, the fossil fuel company bosses, and the financial services parasites feeding off other people’s money” (Counterpunch, March 19, 2020). Which will it be?