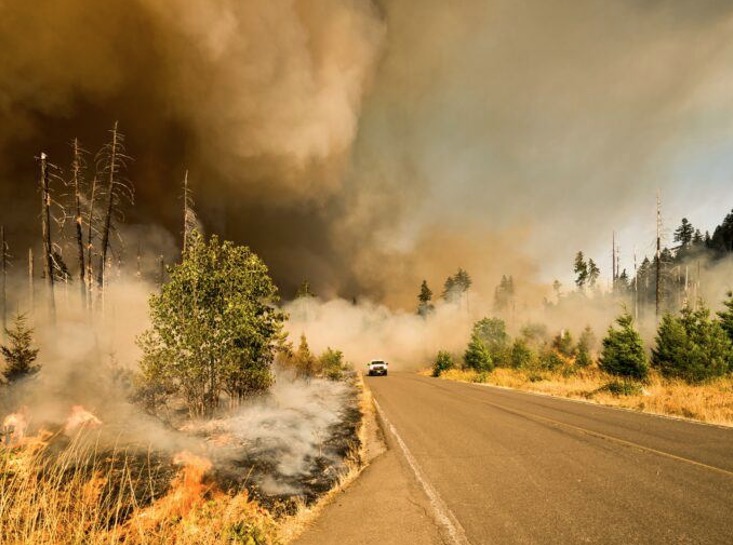 CLIMATE WATCH - Our planet is burning up – at least that is what it seems.

The UK is experiencing some of its hottest days ever recorded. From massive wildfires burning thousands of acres of land in California to record-setting heat waves in Western Europe, something is afoot and it doesn’t feel like the next Ice Age. So what is happening and why?

Scientists have long clamored that human activity on Earth has led to the calamitous weather changes we are witnessing today. The United Nations’ Intergovernmental Panel on Climate Change (IPCC) has confirmed that climate change makes heatwaves hotter and more frequent. According to the research, greenhouse gas emissions have heated the planet by an estimated 1.2 degrees Celsius (2.16 degrees Fahrenheit) over the last two centuries.

The Nature journal published an article this month detailing what its authors say is proof that heatwaves in Europe have increased three-to-four times faster than in other northern mid-latitude areas such as the United States. The reason for this, according to the article, is due to the fast west-to-east air stream, or atmospheric circulation, which is carrying hot air across the northern atmosphere.

Most scientists appear to agree that temperatures will continue to rise unless humans cease adding greenhouse gases to the atmosphere. Without a drastic change in the way mankind conducts its business, heatwaves are predicted to worsen. Tackling climate change should be a top priority for every country today.

Heatwaves that occurred once every decade are now happening at three times that rate. The 2015 Paris Agreement and last year’s Glasgow climate conference were intended to bring the issue to global attention and generate movement on the ground. But current climate policies are not sufficient to avoid the dangerous effects of global warming. More must be done.

Today, wildfires are raging in Spain, France, Greece, Portugal, Morocco and Italy. Over one thousand people have died so far and many thousands more have been evacuated from their homes out of concern for their safety. Climate change plays a significant role in the cause of wildfires since it increases the hot and dry tinderbox conditions that help fires start and then spread quickly. Less precipitation means dry land and vegetation. This means that when a fire starts, it burns faster and more intensely. Hot and dry conditions are a perfect recipe for a massive inferno.

However, it is important to note that not every fire is caused by climate change. Forest management programs, which deal with how forests are maintained specifically to prevent massive infernos, are often insufficient. In addition, it is often careless people who ignite fires through arson or simply by barbecuing.

Human fire starters aside, they don’t cause the actual heatwave. Individuals are not responsible necessarily but since mankind is collectively composed of individuals, it does fall on each and every one of us to take steps to minimize our carbon footprint. There is a reason why famed reality star Kylie Jenner was slammed on social media for posting a photo of her private jet parked next to boyfriend Travis Scott’s plane, asking “You wanna take mine or yours?” And she was slammed again for taking her jet in the end for what turned out to be a paltry 12-minute flight.

Clearly, we have a long way to go until everyone understands that each person must do their part if we are going to affect climate change and minimize the risk to our planet and future generations. Countries like India and China, which are mass-polluters mainly through their numerous factories and industrial output, need to begin taking climate change seriously and not just leave it up to Western countries to figure out.

Yes, climate change is causing the multiple heatwaves and wildfires we are seeing today. It is only a matter of time before the average global temperature rises another degree, the polar ice caps melt and sea levels rise. To prevent this from happening or at least mitigate it enough, we must each take responsibility.

Chloe Atkinson is a climate change activist and consultant on global climate affairs. This (rticle was featured in Counter Punch.)