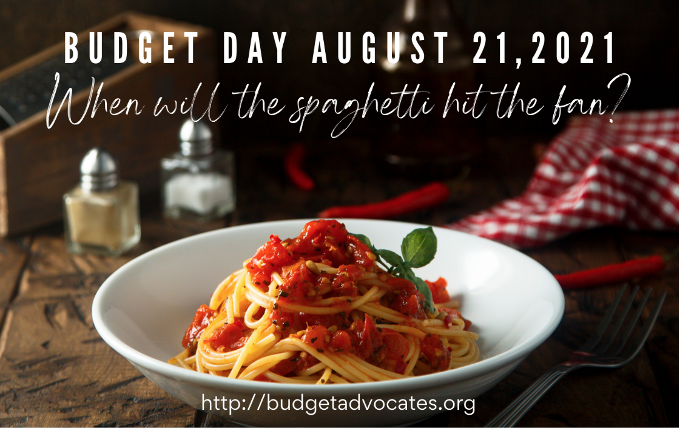 NEIGHBORHOOD POLITICS-And while it won’t be in person this year – blame that pesky Delta variant – it will bring you up to date info on the trials and tribulations of the Los Angeles City budget.

This Zoom event will run from 9:30 a.m. to 12:30 p.m. on Saturday, August 21, 2021 and is open to anyone with an interest in how the City chooses to spend our money. . .and how some services are prioritized while others are pared back.

As at previous Budget Days, there will be a plenary session with members of the City government and finance teams as well as a few of the Budget Advocates speaking on the issues, followed by break-out sessions by City regions to discuss issues of concern in their neighborhoods.

What can we expect this year with the influx of federal funds? And what may happen next year when the spigot is turned off?

How much is due to the impact of the cuts from last year impeding resurrection of service while human infrastructure is rebuilt?

How much is political? Do paid lobbyists have more of a pull or do those who elect our Mayor and Councilmembers have the edge?

What has the Black Lives Matter movement accomplished in changing the City’s financial priorities?

Neighborhood Councils: please have the event posted on your website and go out in any newsletter sent prior to August 21, 2021.

This is also a great opportunity for other entities involved in any aspect of City services to encourage people to learn more about how the money on which they depend is allocated.

And people who work directly or indirectly for the City can find out more about how the different parts of the City interrelate on fiscal matters.

While this event and all of the Budget Advocates’ work is open to everyone, we encourage all Neighborhood Councils to elect or appoint up to two Budget Representatives. Representatives from their neighborhood who can convey local concerns to the Budget Advocates and request advice on how to address local issues as well as reporting back to their Neighborhood Councils on what is happening financially to the City which may impact their stakeholders’ lives.