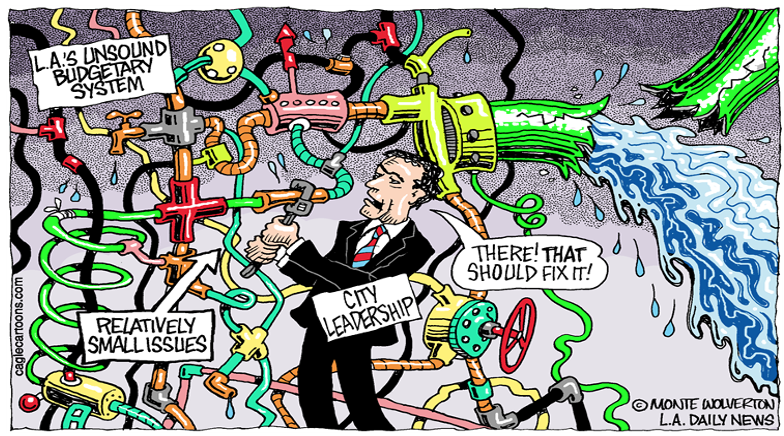 NEIGHBORHOOD POLITICS-What is the purpose of a city government?

A majority of Angelenos would probably agree that it’s supposed to provide the support and services to give everyone living and working in the City a superior quality of life, one worthy of Mayor Garcetti’s vision of Los Angeles as the best-run big city in America.

Many, including the Budget Advocates, would argue that it must do so in a fiscally sustainable manner, one of Mayor Garcetti’s Back to Basic outcome Priorities.

With the advent of the pandemic and the meltdown of the City’s budget due to a perfect storm of factors – the devastating union agreements last year, the ongoing crisis of homelessness, burgeoning pension costs, failing infrastructure, depletion of the Reserve Fund, plummeting revenues with the gutting of tourism and loss of jobs – where are the funds needed to cover even basic necessities?

In recent years, the City’s budget was overseen by people who chose not to understand or address the reality of budget deficits. Numbers don’t lie, but our Mayor and City Council and some of the Departments they oversee conveniently manipulate the numbers to reflect what coincides with their beliefs, and perhaps, their dreams.

For every projected overage, they had a solution. Unfortunately, it was the same solution – the economy is booming and revenues from the seven economically sensitive taxes that fund much of the City Budget are rising, so all we have to do is pour these costs in a bucket and wait for next year.

The bucket was never emptied, but this year the bottom has rusted out.

The City’s Adopted Budget for the fiscal year beginning July 1, 2020 was already stressed because of the impact of the fiscally irresponsible labor agreements with the police, fire fighters, and civilian unions in 2019.

It is now under additional pressure because the City has been unable to offset the elimination of $150 million of furloughs that were objected to by the unions representing the City’s civilian employees. This includes the impact of the failed Separation Incentive Program and the diversion of $40 million from the Police Department budget.

To date, the City has not implemented any meaningful cost savings programs.

On September 11, 2020, the Mayor sent a memo to all City Departments directing they help the City achieve fiscal accountability by taking specific cost-cutting actions including providing the CAO with proposals to reduce their current budget by 3%.

A week later, on September 18, the Mayor issued his Budget Policy and Goals request for 2021-22, which included additional requests for fiscal belt-tightening, including more cuts.

Furthermore, the City has consistently refused to address its Structural Deficit, where its expenditures persistently grow faster than its revenues even in times of increased income. Over the next four years, the City is facing a cumulative deficit of almost $800 million, or about $200 million a year.

The Mayor and the City Council have not addressed the City’s $10 billion of deferred maintenance on its streets, sidewalks, parks and their bathrooms, urban forest, streetlights, and the rest of its infrastructure. This would add at least $250 million a year to the budget shortfall.

The City has not adequately funded its two pension plans to the tune of another $10 billion. The City has a legal and moral obligation to provide pensions to those who retire; by refusing to come to terms with that truth, our politicians are failing in their fiduciary duty.

When the City’s Personnel Department was eviscerated after 2008, it ultimately cost the City more money in lost productivity than ever was saved by the cuts. Despite repeated calls to fix clear-cut problems, the Department was not made whole and there were continuing problems in supplying other Departments with the qualified personnel needed for them to operate efficiently, with vacancies running between five and twenty-five percent even in good times.

We now face a repeat performance of staffing problems in the face of not only increased demands for services by constituents, themselves overwhelmed by fallout from the pandemic, but also with the need to replace experienced personnel who have retired or been helped off the job with the Mayor’s perhaps ill-advised Separation Incentive Program.

As a result, the City is not only underfunded, it is undermanned. And will be for the foreseeable future.

What is the common thread? A lack of cohesive management. The Mayor and some Councilmembers and General Managers may say that they have everything covered. But it is very clear, even from a cursory look, that ignoring the problems do not make them disappear. Any managing at the moment is in reacting to problems after the fact -- not in being proactive. And not in providing and overseeing a cohesive plan to improve our City.

What is the answer? Perhaps there is no one answer but a series of solutions. The Budget Advocates have some suggestions. Other organizations and individuals may have more.

Like serial movies, this article is more of a beginning than an end.

The Budget Advocates will be putting forth some ideas and we welcome others to build on our ideas or put forth their own.

The one certitude is that Los Angeles is in deep trouble and needs help.

(Liz Amsden is a member of the Budget Advocates, an elected, all volunteer, independent advisory body charged with making constructive recommendations to the Mayor and the City Council regarding the Budget, and to City Departments on ways to improve their operations, and with obtaining input, updating and educating all Angelenos on the City’s fiscal management.) Image: Monte Wolverton/LA Daily News. Prepped for CityWatch by Linda Abrams.