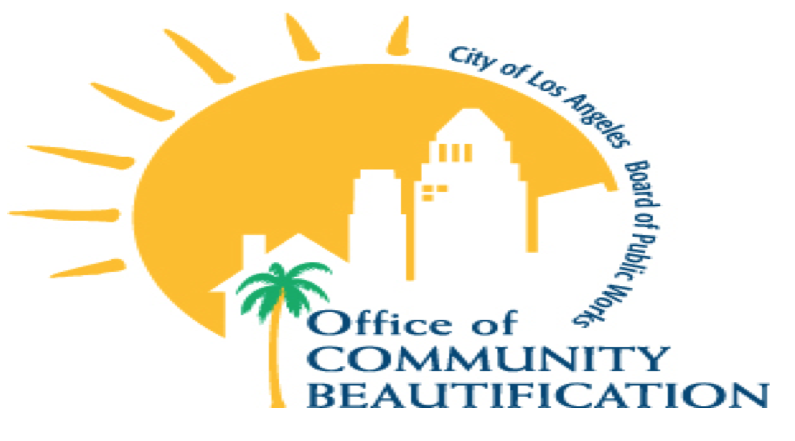 NEIGHBORHOOD POLITICS-The Board of Public Works governs the Department of Public Works and is comprised of a five-member full-time executive team that is committed to delivering Projects and Programs that enhance quality of life, economic growth, public health, and the environment to all Angelenos.

Two of these, Community Beautification and Citywide Filming, are more visible to Angelenos and tourists than the rest.

The Office of Community Beautification (OCB) works with volunteer groups and organizations across the City providing tools and equipment for neighborhood cleanup and beautifications, graffiti abatement, sidewalk repair, and Adopt-a-Median programs through their Clean Streets Program.

The OCB may be best known for its graffiti removal program for the City of Los Angeles. Prompt obliteration is the best way to stop its spread and enhance the City’s appearance for Angelenos and visitors.

Its Community Cleanup Program provides those tools and supplies to neighborhood groups for local clean ups and beautification projects.

The Adopt-A-Median program encourages community groups to adopt designated areas of the public right-of-way to improve and maintain public spaces. There is an average 30-day approval process for programs using standardized plans already vetted by Departments.

The OCB, in conjunction with the Bureau of Engineering, oversees the City’s Sidewalk Rebate Program. Owners of both residential and commercial properties can participate in a cost-sharing program with the City for sidewalk repair. By initiating and bearing part of the expense themselves, the cost of the repairs can be reduced by up to $10,000. Properties owned by a governmental agency are not eligible.

The Clean Streets Program has a warehouse in the Downtown area that is stocked with tools and equipment for neighborhood cleanup and beautifications, sidewalk repair, and Adopt-a-Median programs and is considering establishing a second one in the Valley since a significant number of the requests originate there.

The cost of equipment and supplies is a minimal investment that, coupled with volunteer efforts, yields cost savings compared with the City doing the work itself. The estimated $100,000 investment in supplies and equipment can yield a cost savings of up to $3 million.

The entertainment industry is a catalyst for economic development because it supports thousands of service and supply industries such as advertising, print media, makeup, costumes, craft talent, and craft services. It hosts events, parties, and award shows that support theaters, hotels, restaurants, catering, apparel, and flower shops, all of which spend money on other City businesses further magnifying the fiscal impact.

In non-pandemic times, the industry is an economic engine bringing over $30 billion to the State of California and supporting over 200,000 high-paying middle-class jobs in the Los Angeles area.

In addition, the film industry brings in more than $100 billion in tourism. Tourists come from all over the world because of movies and Hollywood. They come to see the Hollywood Sign, Grauman’s Chinese Theatre, Disneyland, Universal Studios, and the Hollywood Walk of Fame among many other film-related attractions.

Los Angeles has been the hub of the motion picture industry, and then television, for a hundred years. In the past few decades, other states and other countries have been luring productions away with lucrative incentives and tax breaks.

California introduced its own film tax credit, but it is complicated and is not structured in a way to adapt to the rapid changes inherent in the industry. And demand exceeds tax credit availability with the result that projects are still moving out of Los Angeles, taking their budgets and jobs with them.

Los Angeles is serious about attracting and retaining the good jobs Hollywood brings to this region. The City Council and Mayor have approved various entertainment industry incentives designed to retain and attract film, television, and commercial production. These include making most City properties (such as City Hall) available for commercial, television, and film productions at NO CHARGE and Reduced Business Tax Rates for Entertainment Production companies.

As part of its Green New Deal, the City is installing utility nodes to provide a clean and quiet energy source as a substitute for diesel generators at the Old Zoo in Griffith Park, City Hall, and at the DWP John Ferraro Building.

Efforts are being made to avoid neighborhood “over filming” stress by working with production companies and neighborhoods to spread filming sites throughout Los Angeles.

The Board of Public Works, through the Mayor’s Office of Television and Film, has a manager dedicated to filming concerns. Eva Bitar, as the FilmLA Contract Administrator, works with a designated staff person responsible for film issues within each City Department, and can be contacted at Eva.Bitar@lacity.org or (213) 344-8498.