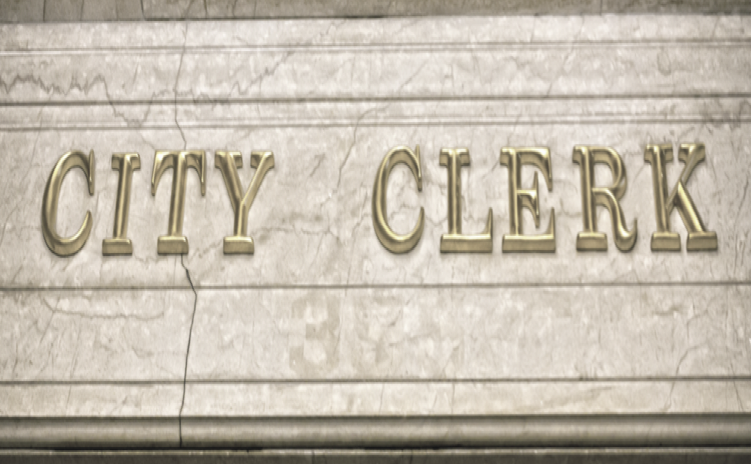 NEIGHBORHOOD POLITICS-The mission of the Office of the City Clerk (Office) is to facilitate and support City legislative processes and meetings, record and provide access to the City's official records, preserve the City's history, support economic development, and conduct elections with integrity.

As City Council’s official record keeper, its Council and Public Services Division (CPS) provides Council Clerks, Voting Clerks, and Legislative Assistants to support and facilitate the meetings of the Council and its Committees, maintaining records of all Council actions.

The division prepares legally required publication notices including ordinances, and schedules and prepares Council agendas among many, many other documents including confirming over 2,100 contracts, posting/publishing more than 1,500 legally required notices and ordinances, processing more than 15,000 documents transmitted for Council consideration and creating in excess of 3,000 Council files each year.

A lot of paper and digital files.

In addition, as mandated by the City Charter, the CPS accepts and records over 3,700 claims against the City every year.

Due to the plethora of paperwork, the department’s work is labor-intensive and internet-reliant.

The Office provides administrative support for the City Council and its committees, ensuring compliance with the requirements of the Brown Act for all postings of its public meetings.

In conjunction with the Controller’s database, the Office helps keep the actions of the City and its elected officials transparent.

The Office used to run municipal elections for Los Angeles until that function was removed under Charter Amendments 1 and 2 which consolidated municipal and LAUSD elections with those for the State of California under the Los Angeles County Register/Recorder.

Although the Office of the City Clerk maintains accounting operation for a number of accounts within the City, it does not make payments. Payments are the responsibility of the City Controller’s Office.

As is expected with a labor-intensive department, salaries represent the largest expense of the Office, totaling just under 79% of its budget.

With the exponential increase in document-related functions and demand, and the requirement to not only keep accurate records but be able to access them quickly, the Office needs to improve its online operation.

As with many other City departments, it and the Los Angeles Information Technology Agency would benefit from specialized consultation on the Office’s many needs to find solutions that could better serve Los Angeles.

Improved technical functionality would deliver better support and faster, more accurate information for City officials, other departments and the public which would, in the long run, reduce the ongoing cost of normal departmental operations.

The Office promotes and facilitates programs in support of the Mayor and the City Council's economic development initiatives. To that end and by mandate, the City Clerk administers the City of Los Angeles's Business Improvement Districts program.

To quote from their website: “A business improvement district is a geographically defined area within the City of Los Angeles, in which services, activities and programs are paid for through a special assessment which is charged to all members within the district in order to equitably distribute the benefits received and the costs incurred to provide the agreed-upon services, activities and programs.”

The assessment money is collected by the City or by the County through a special contractual arrangement with the city. Because the assessment funds collected in a given district cannot legally be spent outside of that BID, the City creates a trust fund for each BID, with funds periodically released to support operations.

The City Clerk and Neighborhood Councils

The Office of the City Clerk is involved in Neighborhood Council (NC) elections. The different NC bylaws are not always well-understood by the Office. It would help for the Office to improve its ability to work with the NCs regarding election outreach.

The Office could benefit from some additional training and should devote serious attention to implementing a Vote-by-Mail system to improve awareness, educate stakeholders and increase turnout in every neighborhood.

The Office has also taken over the NC Funding operation from the Department of Neighborhood Empowerment aka DONE. After a rocky transition, it continues to identify issues that either need better understanding or updates to be in compliance with financial requirements.

NC board members would benefit from more comprehensive training about financial responsibilities and authorities. And the Office could provide better oversight if they were to add NC-system specific personnel who are knowledgeable about how various NCs operate and could advise before problems escalate.

Investing in the Office of the City Clerk

Already embroiled in accelerating change in this digital age and facing increased demands from all departments, the City would be wise to invest in aggressive technical upgrades now in order to maintain the level of services the City government requires, the cost of which will pay off in reduced personnel expense.

In order to maintain a high quality of service, the cost of support for the specialized programs that have been instigated by various areas of the City – which the Office ends up having to support -- must be better evaluated and controlled before they are implemented.

The City Council relies on the Office in its day-to-day operations but even it has not been spared cuts and furloughs.

In its recent approval of the Separation Incentive Program (which offers a cash payment for eligible employees to retire early in order to trim the City’s payroll), the City Council is not only incurring potentially unsustainable short-term debt but is encouraging the most experienced staff to leave at a time when they are most needed.

So, most importantly for the future, the Mayor and Councilmembers need to recognize the important contribution General Manager Holly Wolcott and her staff make to the City. The City should revisit the level of funding for the Office to ensure retention of key personnel as well as to maintain services at their necessary levels of efficiency through the current economic crisis.