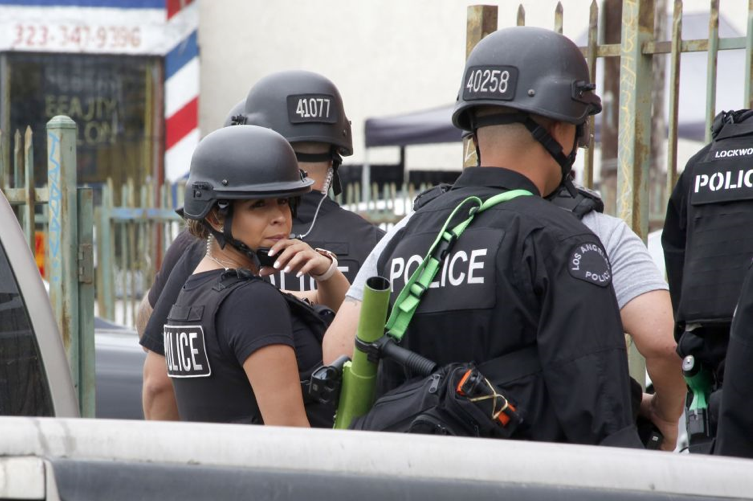 NEIGHBORHOOD POLITICS-In generations past, many small boys wanted to be cops when they grew up. Today their sisters do as well.

The addition of women to what was a male bastion long after other professions embraced equal rights has proved beneficial in many respects, especially when it’s helpful for diffusing tensions without the blatant use of force.

There is pressure to further increase diversity by adding people of different backgrounds, people who can bring different perspectives and understanding to a city of disparate backgrounds.

I’ve lived in Los Angeles for almost 35 years and there has never been a year when hiring new police officers has not been a major topic of discussion.

Even with statistics showing reductions in violent crime in the past decade, many civilians are even more fearful of violence on the streets, while others protest perceived escalations of police aggression against minorities.

In recent years, efforts have been made to bridge the distance between officers and the communities throughout Los Angeles, including a program to get more feet on the street in many neighborhoods.

We’ve come a long way since the paramilitary approach of Daryl Gates and pervasive police misconduct epitomized by the Rampart Scandal. But the perception remains in certain quarters that police actions are inherently suspect, and in return, the LAPD feels under-appreciated.

Officers quite rightly work in fear because they are targets, not only of criminals but also of those who perceive police as the real enemy.

Fear arises from a sense of being outnumbered by opposing forces. Those who want a greater police presence in Los Angeles as well as the Los Angeles Police Protective League (the union which represents police officers in negotiations for pay, safety and welfare and better treatment of their members) feel that the LAPD has been seriously understaffed for many years, primarily due to budget constraints.

The police hiring process is demonstrably inefficient under the City’ Personnel Department. It needs to be overhauled and streamlined, answering to the LAPD’s needs while protecting the interests of Angelenos who want an educated and compassionate police force, one that can apply appropriate force against criminals without eviscerating the rights of the rest of us.

Recruitment efforts need to be ramped up to increase the number of officers by 25% to meet current public safety needs as well as in anticipation of upcoming events like the World Cup and the 2028 Summer Olympic Games where a full complement of line officers on the street will be crucial.

Today, too many sworn officers are riding desks due to the lack of adequate civilian staff. Existing civilian positions need to be fully funded so these officers can return full-time to line status in the field. Technology has streamlined paper flow, but more support staff needs to be added to assume other clerical duties and free up the time of sworn police officers.

Retention is also major concern: when the health and well-being of officers is at risk whether from existential threats or lack of sanitary conditions in the office and on the street, rank-and-file will look for a safer career. When they feel under-valued by those above them and unappreciated by those they are sworn to protect, rank-and-file will look for jobs in which they can feel good about their work and themselves.

Almost all officers receive a not insignificant portion of their take-home pay in overtime which entails additional hours working special events, patrolling LA Metro’s bus and rail lines, and protecting our schools.

Much as cops may like the extra money, long work hours can impact their home life, their ability to perform effectively, and their attitude. The citizens of Los Angeles deserve a police force that is not overtired and overworked. All event promoters, the Metro, the LAUSD, celebrities and politicians should pony up the costs for new hires and training to expand the number of officers to the point where they don’t have to work excess hours.

Training and education are essential not only for new recruits but also to upgrade the skills of currently-serving officers.

Los Angeles needs quality as much as quantity in both its officers and their support staff.

Retraining and refresher courses should address not only the increasing amount of technical support available to solve crime and improve public safety, but also to enhance and practice interactional skills to avoid the confrontations that form the background to ongoing public distrust of the police.

Special training programs for LAPD officers to be equipped and ready to humanely handle individuals with mental disorders must be funded. Many line officers are ill-equipped to deal with this phenomenon especially among the homeless population. This special training would be beneficial to both the officers and to the mentally challenged citizens with whom they will come in contact.

Training of new officers has been insufficient over the years and there are always a number of candidates who fail to achieve LAPD standards of excellence or drop out for other reasons. From a liability and risk management standpoint, both the solicitation of qualified recruits and the number of training classes should increase to power up the City’s police force.

Funds to cover all the foregoing need to be found within the existing LAPD budget. This should start with more efficient use of police officers’ time, requiring outside entities using LAPD staff to finance the hiring and training of additional officers, and cutting down significantly on liability claims, both within the department and from interactions with the public.

Some people choose to become police officers to create a sense of personal power which, when coupled with a gun and baton, has proven disastrous. Fear and prejudices against minorities and stereotypes have licensed acts of violence by the very police who are supposed to protect civilians.

Headlines across the country too often underline the authoritarian approach of police forces out of touch with the people that they serve.

The LAPD and the City’s Personnel Department work to screen out the bad apples. But how can they best attract the good ones to a job with real danger – both physical on the job and private in strain on relationships?

We need to celebrate and thank our men and women in blue and their extraordinary work during this pandemic.

And find ways to ensure their needs are met in the Mayor’s current and future budgets.