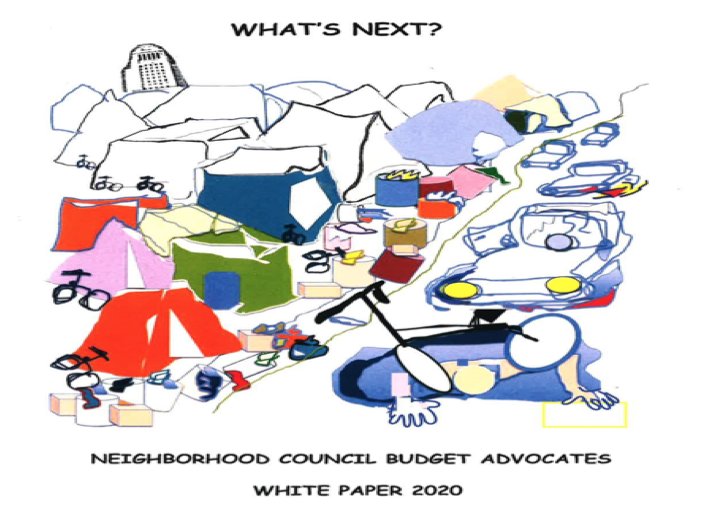 “At last our final product is up for pubic reading,” said Carol Newman, Co-chair of the Neighborhood Council Budget Advocates at the February 15 meeting.

The White Paper addresses the concerns of the citywide Neighborhood Council communities as voiced at the June 2019 Budget Day at City Hall. Budget Advocates, as stakeholders’ representatives, provide recommendations to those city departments that were red flagged with concerns.

Jack Humphreville, Co-chair of the NC Budget Advocates, wrote the introduction to the White Paper focusing on the City Budget’s structural deficit, and how, if ignored through time, the cumulative problem would worsen and possibly impact future generations. Humphreville offers recommendations on how to increase transparency of the City’s budget process. Hopefully, this will “mark the beginning of restoring Angelenos’ trust and confidence in City Hall.”

The White Paper, containing 31 city department reports, is deeply informative reading material. Each section tells a distinct story about the aspects of the examined city departments within their own contexts of providing specialized services to Angelenos.

All departments are equally important, as they sustain the city by providing our livability with an outlook into the future.

The City General Fund is revenue from Angelenos in terms of taxes and fees, such as property tax, sales tax, business tax, utility users’ tax, licenses and permits, fees and fines, etc. Portions of the General Fund are allocated to City Departments to pay for salaries and operating expenses.

The Budget Advocates’ reports are based on careful review of city budget records and interviews with high-ranking departments’ key personnel. At the meetings, administrators shared their departments’ goals and the number of personnel required to fulfill those goals. Discussions involved what percent of their budget is allocated from the General Fund and what percent comes from their programs’ special fees. Administrators shared experiences on their departments’ efficiencies in fulfilling their goals. A few spoke of the challenges of city growth and the need to increase personnel.

HCID’s Director of Enforcement Operations shared that as development grows in the City, so does the growth of his Program’s inventory. He said, “Inventory (for both the Rent Stabilization Program and new construction) has increased from 700,000 residential units to a present estimate of 800,000 units, and the program having 10 vacancies has resulted in inspections being four months behind schedule,” NCBA White Paper 2020.

Departments’ General Fund allocations vary from small percentages, to the point of almost being self-supporting, while other departments are nearly totally dependent on the General Fund.

For example, HCID’s total budget was $90.5 million. Its multiplicity of programs’ special fees generated 88% of its total budget for 2019-20, while allocations from the General Fund were 12%. Total salaries for that department are $70.2 million while their general expense total is $20.3 million.

In contrast, the Office of the City Controller was allocated 97% of its total budget from the General Fund for this fiscal year: 95% of that went to salaries and 5% to office expense and travel. “The remaining 3% of the department’s budget came from reimbursements from Special Funds for work provided to other departments,” (NCBA White Paper 2020).

The White Paper 2020 tells the stories of some of Los Angeles City Departments from a funding perspective.

(Connie Acosta is a member of the Neighborhood Council Budget Advocates and member of the Los Angeles Press Club.) Edited for CityWatch by Linda Abrams.