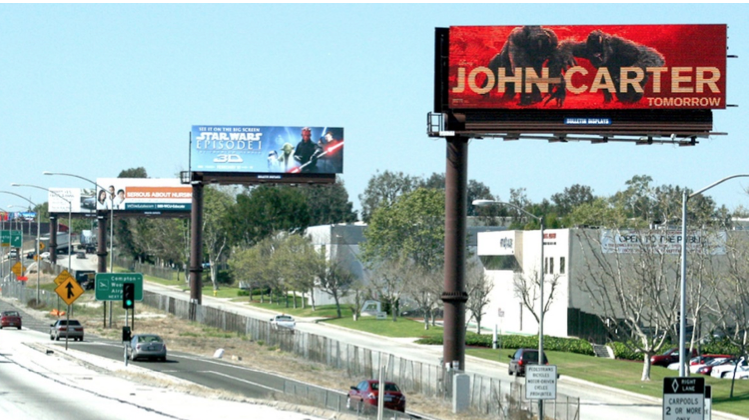 NEIGHBORHOOD POLITICS-No, this is not about squishing a fruit or selling it into sexual slavery.

Instead, it is an example of how our elected officials used a democratic process to justify profits and abuse the electorate.

Have you noticed the increase in billboards? Well, that’s not by accident or by apathy. It is due to the total abnegation of what the people as represented by the Neighborhood Councils demanded by the backdoor dealers in City Hall.

I doubt any of us wouldn’t agree that billboards are a visual blight. They block views, line of sight and otherwise distract drivers. The digital ones are a form of light pollution, disturbing nearby residents and can be even more of a headache for people really close-by having to deal with their flashing and humming; others block light and air, and create even more of a distraction to already distracted drivers.

Advertisers use false eyeballs-on assumptions to generate greater revenues for themselves, and their lobbyists are in bed with local land-use influencers.

And our City Councilmembers see profit, direct and indirect in allowing these eyeball eyesores to proliferate. Not for the city’ inhabitants who have to live with them, but to promote their own careers.

Three years ago, I wrote the following in a Community Impact Statement (CIS) from the Historic Highland Park Neighborhood Council on Council File 11-1705 which set forth a selection of options on how the city should deal with billboards:

There is no corporate blandishment, no community benefit, that can make up for the loss of quality of life for someone who has a flashing billboard outside their window instead of a view of the Arroyo by day or the dim outlines of trees and buildings by night. Nothing that will return the power to walk to someone hit by a driver distracted by an advertisement glowing above them.

Therefore, we would strongly encourage City Council and its Committees to approve version B+ of the citywide sign ordinance as adopted by the City Planning Commission on Oct. 22, 2015 which helps protect our communities and neighborhoods by:

We are dealing not only with fact but with what appears to be. How can we not be concerned?

Two hundred firms employing 442 lobbyists are currently registered with the Ethics Commission and those firms were paid $58 million last year to promote the interests of 1,400-odd clients including Clear Channel Outdoor, the multinational corporation that owns some 1,600 billboards in the City, and other companies pushing for the relaxation of the current ordinance.  The Ethics Commission does not have the funding to oversee the details of these lobbying firms which raised almost a BILLION dollars for candidates for City election plus over $300,000 from individual donors.  Though registered lobbyists are prohibited from contributing directly to candidates, it is not difficult to determine the source of funds.

Twenty-three other Neighborhood Councils submitted comments, almost all of which joined us in strong support for strictly limiting billboards in Los Angeles. This is not parsing words at City Hall but a quality of life issue that all of us deal with every day and will have a significant and lasting impact on our neighborhoods into the next century.

Imagine the shock when not only did the City Council jump in bed with the billboard advertisers but they read out the names of these Neighborhood Councils as being in favor of the rampant expansion of billboards into all neighborhoods across the city.

This is partly due to how the submission of a CIS is structured. A Neighborhood Council has to indicate if they are for or against the File. In the case of 11-1705, which had multiple options, we all clearly indicated support for the most restrictive option.

Between the time the Neighborhood Councils submitted our comments and the City Council vote, the Planning and Land Use Committee (PLUM) of the City Council had discarded the original verbiage of the Council File to be one instructing City departments to create new reports and proposed regulations to allow billboards, both static and digital, on private and public property in neighborhoods throughout the City of Los Angeles, including on buildings designated as Historic-Cultural Monuments.

None of the Neighborhood Councils were advised of this.

Two of our elected officials – José Huizar (the Committee chair) and Gil Cedillo represented Highland Park and certainly knew the Neighborhood Council’s position – were on the PLUM committee that rewrote the Council File to remove billboard restrictions and legalize their use outside the sign districts, including adding digital ones.

And for the crassest of reasons

It’s all about the money.

Read more about the billboard issue and what can be done about the CIS process in upcoming articles. In the meantime you can look at the back and forth on Council File 11-1705 at: https://cityclerk.lacity.org/lacityclerkconnect/index.cfm?fa=ccfi.viewrecord&cfnumber=11-1705. Note that the Council File number starts with an 11 – for 2011; that’s how long the city has been kicking the issue down the road.