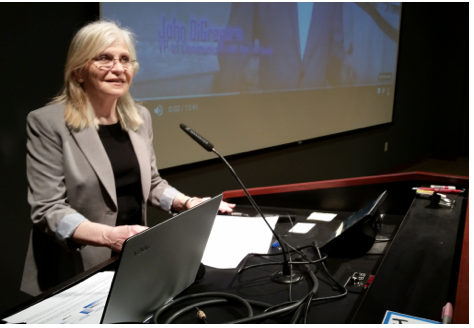 A welcoming video, started off the morning session featuring BAs and City Officials who play a large roll in contributing to the formation of the City Budget including Jay Handal, BA co-chair; Ron Galperin, City Controller; and Richard Llewellyn, City Administrator Officer, who all discussed the valuable work of Budget Advocates.

The Budget allocates everything that this City runs on, from street services to police and paramedics response-time, said Handal, yet, with the continuing budget deficit, it makes it difficult to increase such services. “We (BAs) as elected people from NCs’ around the city, have an obligation to the city to report on the budget and city services.”

Are the services in your communities delivered in a timely manner? What is lacking? What would possibly benefit the city that it does not have, or hasn't had for a long time, Handal asked attending stakeholders. He urged them to take the survey at the NC Budget Advocate website. Results will be used for the BA’s annual White Paper to show the Mayor where to increase certain budgets to improve the city as a whole “and better the quality of life in the City of Los Angeles.”

“My best ideas come from Budget Advocates,” said Galperin, who started his city government career as a BA wanting to know where the city’s money came from and where it was going. Briefly, he touched on the topic of city real estate: Out of the more than 8,000 city-owned properties, “some are more valuable than others, the usage of some will remain the same, while some have a good opportunity to better leverage growth.”

Chief Budget Analyst Llewellyn, whose staff prepares the budget for the mayor and City Council, provides financial and physical analysis along with reports detailing “when revenues are going up or down.” The Budget Advocates “help us watch departments and priorities,” said Llewellyn, who loves working in local government “because that's where the rubber meets the road.”

The BAs confer with City Department managers and Agencies. They learn about Department Budgets, their goals, and which departments could improve in certain areas if more funding were made available to them. Then based on the findings, the BAs write specific recommendations; they may even serve as advocates for some of the departments’ requests. 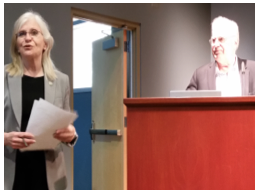 Budget Advocate Jack Humphreville, a financial analyst and a columnist for CityWatch, explained that Los Angeles is the second largest city in the country, but unlike New York and Chicago, LA’s government does not have the same responsibilities as those cities and, “because of the [LA] City Charter, that's the way things worked out.” The City is responsible for Public Safety, Police and Fire Department, City Planning and Zoning, and the Bureaus that deal with the city infrastructure, such as Bureau of Street Services, Engineering, and others. Education, Social Services, Welfare, Public Health, Criminal justice and Jails are County matters.

Last April 27, the City presented in its four-year plan, a projected budget deficit of about $200 million for July 1, 2018, according to Humphreville. The City uses funds from different categories of the General Fund to reduce the projected deficit.

On Regional Budget Day, Humphreville reviewed 12 recommendations that appeared in the Budget Advocates’ early White Paper  in October 2017 that will culminate in the final White Paper.

Here are some examples:

Barbara Ringuette, Vice Chair for Administration of the Budget Advocates, went over the annual budget timeline as to where, how, and when the BAs and the public can influence the Budget.

The Mayor submits the City’s proposed budget by April 20 of each year. The City Budget and Finance Committee, composed of five City Council members, convenes with departments who discuss their concerns and make their case for their budgets. The Committee’s budget hearings span over two weeks during which the public is invited to weigh in at the beginning of each day’s session. Council members may request departments to report back on specific concerns at the hearings, Ringuette explained.

Following the department hearings, BAs have an opportunity to sit at the table with the City Budget and Finance Committee to confer on budget recommendations. Then, the Committee forwards the budget to the full City Council for approval before it is sent to the Mayor. In May, the Mayor signs the budget and it goes into effect on July 1 in the new fiscal year.

On Budget Day in June 2018, Budget Representatives selected by their NCs and stakeholders will meet and review the budget process as presented by the Mayor and his budget team, the City Controller, City Administrator Officer (CAO), and the chair of the Budget and Finance Committee.

Budget Advocates serve a catered breakfast at the event. Keep a look out for the date.

(Connie Acosta is a board member of the Echo Park Neighborhood Council, a budget representative, and a member of the Los Angeles Press Club.) Edited for CityWatch by Linda Abrams.