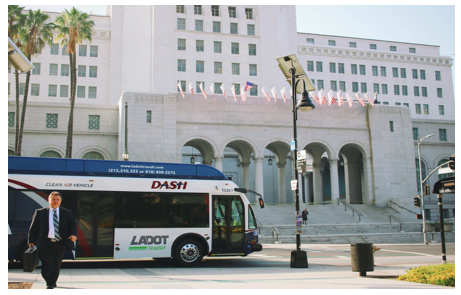 BUDGET ADVOCATES-The Neighborhood Council Budget Advocates of are not only charged with advising the Mayor’s office on the budget but also with making recommendations to improve city services. BAs Valaida Gory, Ivette Alé, Jon Liberman, Glen Bailey, and Estuardo Ruano met with transportation staff Monique Earl, Assistant General Manager, and Angela Berumen, Chief Management Analyst to give the following recommendations to the department:

The Department of Transportation (DOT) provided an overview of their 2017-2018 Adopted Budget. The total budget is $320,364,216 with $158,499,980 being the Department’s Operating budget and $161,864,236 reflecting related and indirect costs. Revenue from the General Fund is 60% of their operating budget with parking fines being the largest source of revenue. The remainder of the DOT budget is sustained by way of special funds, and allocations from propositions and measures that make up the balance of their revenue source.

At this time, DOT feels they can accommodate any underfunding and overtime gaps with special event reimbursements, special set asides, and transfers of funds. It was described as a complex process but one that enables the DOT to stay in the black.

Los Angeles DOT’s Strategic Plan has been revised for 2017-2018 and some of the goals and strategies include the following:

Goal 1:  A Safe and Healthy City

Note: Vision Zero and Great Streets are addressed in benchmarks under this goal.

Goal 2:  A Livable and Sustainable City

Goal 4:  A Responsive and Transparent Department

Most of the recommendations made by last year’s committee were addressed by DOT. The recommendation to maintain revenue from parking citations in the respective neighborhoods and keep funds generated from meters in the respective areas has not been addressed. DOT indicated that all parking revenue goes to the General Fund and diverting funds would create a shortfall for the General Fund. The Mayor and City Council ultimately decide on the use of those funds. The request for communication staff was denied in the 2017-2018 budget but DOT is in the process of re-organizing this function and will request additional resources in the 2018-2019 budget.

DOT has a succession plan in place that they feel is working adequately to backfield positions created by retirees.

Successes include the additional $13million allocated for Vision Zero and the addition of five new staff to the traffic division that should provide another tier to help monitor and increase accountability. The Great Streets Project is being implemented as part of a collaboration with the Mayor’s Office. Also, the movement of the ATSAC program to the 11th floor of the California Transportation Building will enhance infrastructure and upgrade technology. However, the move and analysis of all upgrades to ATSAC will not be completed until 2019.

Challenges for the DOT include the need of additional staff to address the service needs of residents, especially relating to parking issues. Their goal is to increase staff back to levels before the huge deficit. They feel this is the best way to increase their efficiency. Note: The Special Parking Revenue Fund (SPRF) is swept every year. It would take an ordinance change to make any type of modification to the current policy and procedure.

One of the ways for BAs to help DOT would be to advocate for more staff in the traffic division to address issues such as abandoned vehicles. DOT plans to have more traffic officers available. BAs could also support the use of Transportation Technology.

A specific percentage of how much of budget is spent on homelessness was not given but it was indicated that the costs will be absorbed in the current budget.

The following Neighborhood Concerns were presented:

It was clarified that MTA and DOT are two separate departments that collaborate but one does not have oversight over the other.

Most of the BA questions and concerns were addressed by the staff. It appears the department is moving forward successfully with their strategic plan and able to operate within the current budget. Hopefully they will receive the additional staff requested to enhance services even more.