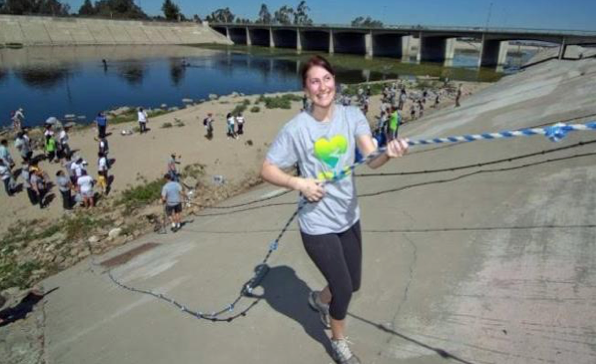 BEGREEN--Friends of the LA River (FOLAR) is pleased to announce that it has broken its own record from last year in both number of volunteers and tonnage of trash collected for the just-completed 28th Annual Great LA River CleanUp: La Gran Limpieza (CleanUp). FOLAR’s annual CleanUp has exploded in recent years, and is the largest urban river cleanup in America. Held the past three Saturdays of April, the 2017 CleanUp attracted 10,000 volunteers—individuals and groups—who collectively removed over 100 tons of trash from 14 sites along the length of the LA River.

Focusing primarily on the soft-bottomed and green sections of the LA River which are, in themselves, incredibly diverse, the sites ranged from the bucolic Sepulveda Basin in the San Fernando Valley to the Golden Shore Marine Reserve in Long Beach, where dolphins and seals are a common sight.

After the rains this year, there was an increased need for the CleanUp as additional trash was caught in the green sections of the River.  Regularly found trash includes numerous shopping carts, plastic bags (fewer every year), snack wrappers, cups, and mattresses. Volunteers also found more exotic items ranging from car parts to bathtubs to a 6-foot giant Styrofoam head.

Volunteers included visitors from across California, but primarily Angelenos of all ages and backgrounds, including families, students, elected officials, and hipsters—many of whom participate each year.  More than 200 volunteer groups turned out, along with the 1000s of individuals, demonstrates the ubiquitous interest in and passion for the LA River.

FOLAR’s Founder, Lewis MacAdams, knew that Angelenos would love their river again and become its stewards. With the creation of FOLAR 30 years ago, he took the lead in making that happen, emphasizing that “each area of the Los Angeles River is unique and requires special attention and appreciation.”

FOLAR’s stewardship of the river encourages community engagement, education and enjoying time at the river. To that end, volunteers were entertained during the events by popular local bands that came to the CleanUp to connect with the LA River community. Select sites also featured FOLAR’s 38’ mobile visitor and education center, the LA River Rover, which taught close to 800 volunteers about the LA River’s past, present, and future.

The 2017 CleanUp was made possible through sponsorships from the City of Long Beach Clean Team, long-time partners REI Co-op, Toyota Financial Services, and Rubio’s Coastal Grill, who were joined by new sponsors Soylent and Skanska as well as many others.

(Friends of the Los Angeles River (FOLAR): Founded in 1986, FOLAR is a 501c(3) nonprofit whose mission is to ensure a publicly accessible and ecologically sustainable Los Angeles River by inspiring River stewardship through community engagement, education, advocacy, and thought leadership. Learn more at www.folar.org.)