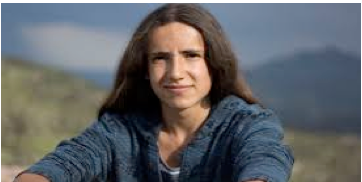 PLANET WATCH--If Xiuhtezcatl Tonatiuh didn’t have the look and sound of a 15-year-old, one could easily assume he was twice his real age. The indigenous environmentalist talks like a seasoned activist and well-educated adult, rather than the teenager he really is. Perhaps it is because he is so driven by passion for his cause of climate justice.

In an interview on Rising Up With Sonali, Tonatiuh revealed that he started his political activism at age 6. He explained that it was natural for climate change to be the cause dearest to his heart because “being involved in the climate movement is protecting everything that I love.”

Tonatiuh, who is the youth director of Earth Guardians, is one of 21 young Americans who, together with former NASA scientist James Hansen, are bringing a lawsuit against the U.S. government for failing to curb climate change. A federal district court judge in Oregon recently cleared the way for the lawsuit with a ruling that affirmed the group’s legal right to sue the government. The lead plaintiff, 19-year-old Kelsey Juliana, released a statement saying, “This will be the trial of the century that will determine if we have a right to a livable future, or if corporate power will continue to deny our rights for the sake of their own wealth.”

Tonatiuh explained how the context of climate activism has changed over the years and led up to this legal effort. “When I first got up on stage [at age 6] and participated in rallies and protests, it was all old, white people. And now we’re seeing a change in this movement: more young people, more people of color,” he said. “With diversity in participants comes diversity in tactics. We have to be creative, innovative. Young people suing our government over climate change—that’s unheard of.”

At the heart of the lawsuit is the assertion that the government is violating the constitutional rights of young people by not doing all it can to stave off climate disaster. The recent record-breaking rains in Houston, leading to deadly floods that have claimed half a dozen lives, are only the latest indication of the reality of climate change.

Tonatiuh views the government’s priorities as seriously distorted, saying, “We have messed-up values at such a systemic level that we justify the destruction of our planet with a paycheck. We justify threatening our children’s future with the amount of money in our pockets.”

He’s right. Setting aside climate skeptics, most of our leaders in government and finance who acknowledge the role of humans in warming the planet reason that it would cost too much money to transition away from fossil fuels immediately. Tonatiuh, who is wise beyond his years, dismisses this destructive pragmatism with a quick retort: “If we subsidize renewable energies the way we do fossil fuels, we can power the world.”

Tonatiuh takes a nuanced view of President Obama, saying, “It’s tough in American politics because our Congress blocks so much action. [Obama] did some really great things while he was in office,” but, he added, “I really do believe he could have done more. He could have done less to push fossil fuels. An ideal leader would have done more than Obama did.”

Obama has been a mixed bag on climate change. His most notable achievements include refusing to approve the building of the Keystone XL pipeline and accepting the recent historic United Nations accord on climate change (however toothless the Paris Accord is). But perhaps his greatest feat has been to simply insist that climate change is a reality, particularly given the persistent intransigence of conservative and corporate-sponsored officials espousing climate denial. Tonatiuh had harsh words for climate denialists: “Politicians in greedy First World countries like the United States ... [who] deny climate change—they’re turning their back on every single life that has been lost, every single community that has been devastated.”

Whoever occupies the White House after Obama will do so at the most crucial juncture in the movement to save the planet from climate change. And yet the issue that is the underlying existential crisis of our time has hardly come up during the presidential debates and election-related media coverage over the past year. This compilation by the League of Conservation Voters reveals the depressing reality of the ludicrous views of Republican candidates Ted Cruz and Donald Trump. But even the Democrats are disappointing, with Hillary Clinton espousing a list of moderate reforms and Bernie Sanders failing to offer specific ideas despite his bold rhetoric. “All my chips are on a leader that will fight for our future,” said Tonatiuh, who recognizes the importance of tackling climate change in the next decade.

But Tonatiuh himself represents exactly the kind of leader our society desperately needs. In addition to his extensive political activism, he is also a musician. In his song “Indigenous Roots,” he raps, “We are part of the earth, not separate from it. We are the warriors of the land, the protectors of nature, and the guardians of the earth.” He calls himself a “conscious hip-hop artist,” which means that “everything I put out is with an intention to tell a story about what is happening in the world, to say something that matters.”

Tonatiuh is very conscious of his own community’s background. “My entire childhood I grew up learning about the genocide of my people, the oppression, the stealing of our land, our language, our culture,” he said. He is one of a growing number of indigenous activists all over the world who are on the front lines of the fight to beat back climate change. Groups like the Indigenous Environmental Network, the Global Justice Ecology Project and Tonatiuh’s organization, Earth Guardians, are leading movements across North America and the world.

Our world has failed young people like Tonatiuh. We have carried on with business as usual while burning away our children’s future. While this individual, inspiring teen has devoted his life to protecting the planet, why are the rest of us resting on our laurels?

(Sonali Kolhatkar is Co-Director of the Afghan Women's Mission and a political writer for TruthDig …where this piece was first posted.)