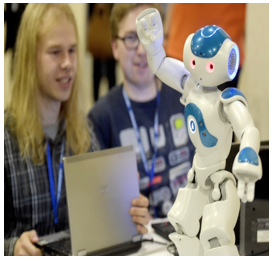 GELFAND’S WORLD--The other day, I went into my bank to deposit a check. The lobby had a kind of sad ambience. It looked like most of the tellers had succumbed to some epidemic, because they were almost all absent. There was just this one lonely looking woman available to serve customers, way over on the far end of the otherwise empty teller line. The line of customers reached almost to the door. After a half hour of waiting, I finally got close enough to ask a bank employee a few questions. The banker (that's what they seem to call any employee who doesn't actually work as a teller) admitted a few things.

He allowed, albeit in diplomatic terms, that Chase Bank was actually doing it all intentionally. The replacements for the lost tellers were right there in the lobby. But the new kind of tellers are robots, sort of sophisticated indoor ATMs.

Apparently the machines are how Chase is going to cut its staffing. A Chase employee at another branch explained to me that the intent is to get rid of all flesh-and-blood tellers within the year. I haven't checked that assertion with the bank's upper management, but it is what that employee believes to be the case.

Apparently, Chase is not firing people wholesale, but some former tellers have taken the hint and have gone out looking for new jobs. Some may find other positions in the bank. Meanwhile, Chase isn't hiring replacement tellers.

It was the theme for a lot of science fiction stories from the 1940s and '50s. What will workers do for employment (and money) when machines replace us? One common theme in that science fictional universe involved a world where we had all our wants and needs satisfied automatically and without going to work. But as a result, the majority of mankind suffered from boredom. Think of Star Trek without the spaceships. In that fictional realm, people lived in luxury, but a few found themselves obsessed with finding meaning in life.

Would that it were. What we seem to have instead is a system in which the owners of the machines are filthy rich and getting filthier, while the majority of mankind -- the rest of us -- are sinking lower and lower.

Perhaps I'm reading a little too much into this latest trend, although there has been a suspicious diminution in the number of tellers I see in the other bank I visit. If the Chase employees are correct, this is a trend that is developing across the banking sector. It suggests a future in which the majority of us will use machines to do our banking. Perhaps there will be a few boutique banks that will cater to the very rich, much like in the spy novels, where James Bond visits an elite Swiss bank while looking for the bad guy. Of course it's usually the bad guy who owns the Swiss bank, and he has a threatening sort of name. In my town, it's the ordinary Joe's and Sue's who are inviting me to give up the old way of life and adapt to the new corporate culture.

Automation ... Remember when gas stations had employees who pumped the gas into your tank? Lazy writers like to type cliches about the fact that the gas jockeys also cleaned your windshield and checked your oil. That was actually true. Of course they also offered to sell you an air filter or a set of tires when maybe you didn't really need them, but everybody worked, and since you had an OK job too, you could at least afford the air filter.

At one time, there were clerks and typists. Have you seen a lot of clerks and typists lately? Modern technology has allowed companies to outsource the work that those clerks used to do. Some of it has gone to foreign countries, but a lot of the work has landed in our own laps. In the modern economy, we've all become clerks. Unpaid ones at that.

ATT keeps telling me that I can deal with their mistakes by going online to ATT.com.  Eventually they won't have to offer real human voices to customers ever again. So far, they've managed to turn a normal customer service phone call into an ordeal.

There are at least two kinds of jobs that don't seem to be successful at going the automation route. One is the traditional checkout line. The Home Depot has a line of automated cash registers, complete with barcode scanners and credit card scanners, but they don't seem to be popular. Maybe it's the hardware store ambience. A line of high end grocery stores was designed around the automated checkout systems. That line is not doing very well in my experience.

The long arc of civilization is not going in only one direction. As one advice professional pointed out, people used to pull their own teeth. That, at least, doesn't seem to be coming back. It's probably got something to do with the invention of local anesthesia a while back.

Maybe I can convince the stockholders of Chase that I can only do banking while in a fully anesthetized state. Then, perhaps they could keep on a few tellers to do banking tasks for me. That much I can stay awake for.

On a more serious note, the use of automation by major corporations seems to overlap with the war against workers' rights. To put it more simply, it's the long term war against the existence of unions, or indeed of any system that allows for worker self respect. When a supervisor can scream at you in front of your peers, or call you names, or fire you for nothing at all, then it's heaven on earth for the managerial class.

So far, the banks don't even have to go that far. They have figured out a way to get rid of employees without having to look cruel. They just empty those tellers' cages by attrition.

The overall point is that when automation takes over, two things happen automatically. Workers lose jobs, and customer service is damaged. I used to be able to ask the teller to take care of a business problem for me. Now I will have to learn an electronic system and do the work myself, just like I have to pump my own gas and go online to fill out some form.

The increasing use of automation seems paradoxical when you consider that there is a human population explosion which has resulted in millions of surplus workers. But there is a rational explanation. Corporations try to rid themselves of American workers. We cost money and have a little self respect. One way to get rid of us is to outsource our jobs to cheap overseas labor. The other way is to buy machines to replace us. The ultimate insult is that a lot of those machines are being built overseas. We can't win for losing in this game.

By the way, it's interesting that Chase Bank has dropped this little bombshell on its customers without any real warning. The long lines of customers look surprised, and the bankers patiently put up with the complaints. I begin to suspect that all those television commercials about how easy it is to learn to do automated deposits are, in fact, the corporation's way of telling us that we are losing a service that we once took for granted. The approach is to avoid any mention of the major irritation that we will endure, and pretend that we are getting some wonderful new service. Of course that wonderful new service is really the absence of service.

I suspect that this is just one more element in a long line of future automations that we will experience. More and more, we will do the things that businesses used to do for us. But I still refuse to do my own appendectomy. I guess I'm too proud for some things.

(Bob Gelfand writes on culture and politics for CityWatch. He can be reached at amrep535@sbcglobal.net)