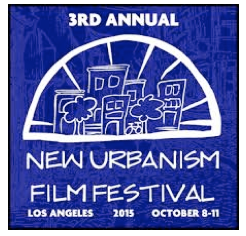 CITYSCAPE-Having fun while being serious: an unbeatable binary that’s possible when spending some time over an extended October weekend finding your level of understanding and commitment to the New Urbanism. You can plug yourself into the ongoing dialog about city planning and the decisions others are making today about how our neighborhoods will operate tomorrow. This is a chance to learn the vocabulary and the concepts, and step into the conversation as a better-informed citizen decision- maker. Then you can start participating and help make those decisions.

There’s something for everyone -- from the totally unaware but curious, to the seasoned urbanist. Best of all, most of the learning takes place huddled in a film festival: the 3rd Annual New Urbanism Film Festival taking place October 8-11 at the Acme Theater on LaBrea Avenue. There will be panels and films, workshops and walking tours, and a town square atmosphere with lots of interaction.

It’s an opportunity for “planners, officials, and the public to have a conversation about the ideas of public planning, but not about a specific project. It's easier to have those conversations when it is not a negotiation,” says Festival Executive Director Josh Paget.

Why should it matter that you vibrate on the frequency of the “new urbanism?” Because knowing how our environments operate is important for everyone – and no longer exclusively the realm of city planners, architects, urban designers, developers, and engineers. More of us need to understand what these professionals do if we are to preserve our neighborhoods and have a stronger voice in the planning decisions that impact how we live in and use the city and its urban environment today – as well as what the city of tomorrow will look like.

Perhaps you are already familiar with – or are experiencing – some aspects of the new urbanism.  Do you live in a neighborhood that is easy and stimulating to walk through? Are your workplace and home close to one another, instead of far away, requiring a commute? Does your neighborhood have a diverse mix of shops, offices, apartments, and mixed housing -- reflecting quality architecture and urban design as well as traditional neighborhood structures? And do you use alternative modes of mobility like walking, skateboarding, biking, and public transit or ride sharing to get around?

Answering “yes” to any of these questions means you are already “friendly” to the new urbanism that embraces this range of lifestyle choices. Decades ago, it may have been called being an “environmentalist,” but today the idea of being at one with one’s surroundings and nurturing your environment flows right into new urbanism.

Learning about New Urbanism through the medium of a film festival (supported by events, screenings, workshops, panels, and walking tours of neighborhoods)inspires the kind of collegiality, networking and sociability that can make serious learning fun! You will be able to explore areas of interest such as:  the basics of new urbanism, the role of street art, the sociological impacts of urbanism on individuals and communities, how architecture affects the community around it, the human experience of urban design, and active transportation.

According to Festival Director Paget, “The thing I like about the New Urbanism Film Festival as it applies to the local LA scene is that it is a chance to see the future of cities all over the world. In Los Angeles, we are planning for BikeShare, we are debating Road Diets, Bicycle Boulevards, etc. We don't know what it will be like, so that might be a factor of resistance, but with these videos we can see the implementation, the success and mishaps of the various projects in various cities. We here in LA can have a shared experience, through these films, and then we can have a more informed conversation about public planning.”

In the rush to grow, densify, expand, inflate, over-indulge and generally blur our roots – so much that they can barely be seen anymore -- we have created an environment out of sync. We are at a crossroads, a time of critical mass of density and traffic, and growing criticism that not enough is being done about it.

We are challenged to harness new methods and lifestyles, sometimes without realizing we are merely reinventing what worked before. A “return to what is natural” ethos is taking root by early adopters and has a chance of becoming mainstream once people get to know more about it. New Urbanism -- a form of restoration -- has arrived.

It’s time to do your part at this critical juncture in the growth and development of our city when there is so much tension, maybe even regression, existing between the status quo and change. You can learn something new about urbanism and how you can influence it.

Step into a crowded city planning landscape at a time when our city is experiencing off-the-hinge reactions to growth and development – a time when lawsuits are threatening to shut down buildings that have been halfway built – and when fundamental change angers fundamentalists.

Find out about the “good fights” being waged to save our historic and cultural heritage, and about the suspicions that money is privileged as the arbiter of decisions. There is a great disconnect between those who want change and those who are unprepared to move forward, either looking over their shoulders or staring straight into the past, hoping for its return. In some quarters there is even an absolute denial of progress, creating a caustic environment with public quarrels in every part of town.

But Los Angeles is alive with change … only the walking dead could not see, hear, feel, or want it!

So hop in … the hours you spend experiencing the New Urbanism Film Festival programming will give you a better understanding of the metamorphic transition our city is going through. It’s a holistic and striking alteration in appearance, character and circumstances – a new vision of just how great our city could be.

More of us need to start dealing ourselves in, especially if we can create a linkage between our static, ingrained life requirements and the fluid needs of future generations – the ones who will live by the stakes we pound into the ground today. It may be our decisions now, but tomorrow it will be their city.

More information about the New Urbanism Film Festival can be found at www.newurbanismfilmfestival.com

(Tim Deegan is a long-time resident and community leader in the Miracle Mile, who has served as board chair at the Mid City West Community Council, and on the board of the Miracle Mile Civic Coalition. Tim can be reached at timdeegan2015@gmail.com.) Edited by Linda Abrams.