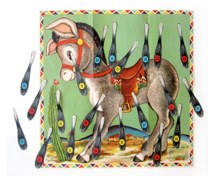 CD4 ELECTION-Back in 2011–2012, when redistricting was underway, many of us were scrambling to figure out how the boundaries of the new city council districts would be drawn. That was especially true for many of us in Council District 4. The original redistricting proposal had many of the older Wilshire corridor neighborhoods from the Miracle Mile to Hancock Park in CD 5, but the map quickly morphed again into what it is today: A convoluted carpet stain that meanders from the Miracle Mile and Hancock Park to Sherman Oaks via the Hollywood Hills with side stops in Silverlake and Toluca Lake. It is the byproduct of City Hall sausage making at its worst.

So, now that it’s time to elect a new CD4 council member we are scrambling once again to figure out how to select someone to represent a district with such far flung neighborhoods. Some issues are universal, but the complexity of CD 4 with its many different community plans will present a daunting task for the next council member. Whoever is elected will have to hit the ground running on day one and, frankly, if they need a “learning curve” their education will occur while dodging incoming rounds. CD 4 is a battlefield of angry voters who are beyond frustration with City Hall.

I have attended four-and-counting debates trying to determine what each candidate brings to the table. We have community activists (some who have worked for the City and some who haven’t), several candidates who have worked in County or State government, and a couple that I can’t quite figure out yet.

So far the debates have been interesting, but they are set pieces that have done little to help voters evaluate who would be the best person to replace Tom LaBonge. After the first debate all the candidates start sounding alike – particularly given their habit of  “borrowing” the best lines from their competitors.

By design, the debate format is too constrained to be little more than a regurgitation of bullet points that create in the viewer a sensation akin to Attention Deficit Disorder. At best, debates provide candidates an opportunity to make a first impression, which is helpful – but not particularly telling because candidates tend to be very skilled at making first impressions. But debates are woefully lacking in supplying substantive information that voters need to make a truly informed decision. And often debates send people home with more misinformation than real information. The hard truth is there are certain things a council member can do on their own and many other things that require the compliance of the full council (and as a result are practically impossible to achieve). The lines between these two points are so blurred at some debates that candidates can promise anything and not get called on it.

As they are currently configured debates do not work ­– imagine a bookstore that only sold book covers. It’s a fool’s errand to buy a book solely based on the author’s photo or the typeset of the title. We need a more intelligent and rational way to evaluate candidates, especially when we have an open seat with 14 candidates.

The Council District 5 Homeowners Coalition has devised a method of reviewing candidates and their positions that is worthy of replicating here in CD 4. It starts early in the campaign process: Candidates for every City office are asked the same set of questions and graded on a sliding scale based on their answers. The answers are posted without a recommendation, but the grading system leaves little doubt about who answered the questions and who did not. They also hold recorded debates that include detailed follow up questions.

The primary election for a new CD 4 councilmember is coming to an end, but it is past time for the community groups in our district to form our own coalition to help our residents make truly informed decisions about future candidates seeking City offices. The MMRA is committed to joining with other residential and homeowner associations in organizing the Council District 4 Community Coalition; not only to help better educate voters, but also to serve as a lobbying force for the many issues our communities share in common.

But where does that leave us right now – with so many candidates and so many questions unanswered? We have been a day late and dollar short on getting serious looks at the candidates in the primary, but that will not be the case in the runoff. (And it is the clear consensus that there will be a runoff.) The MMRA will produce video interviews with the remaining two candidates, which will comprehensively address issues relevant to the residents of the Miracle Mile and to CD 4 as a whole. We promise to give you the information and insight you need to make a well-educated decision in the runoff election. And if a runoff candidate declines to participate in these interviews, we’ll let you know and you can factor that into your decision.

In the small comfort category: I was so disturbed by what I saw at the early debates that I devised a transparency pledge and asked each candidate to sign it. Twelve of the 14 candidates have signed it and we will see who keeps their word once they are in office. But make no mistake, everyone is watching. And whomever wins will be sitting in a chair with a built in ejector should they prove to be ineffective or tone deaf to the needs of CD 4. You know folks are riled up when they are already talking recall before the election even takes place. It is a sign of the times.

(James O’Sullivan is president of the Miracle Mile Residential Association and is one of the founders of fixthecity.org. This perspective was posted first on the MMRA Newsletter edited by Ken Hixon.)