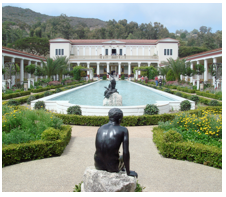 GELFAND’S WORLD-The city of Herculaneum was a wealthy part of the Roman Empire replete with villas and a summer clientele. In the year 79, it became, along with Pompeii, the equivalent of the La Brea Tar Bits, only for Roman architecture rather than prehistoric mammals. The eruption of Mt Vesuvius covered Herculaneum in ash and rock. It was another 1700 years before some of the ruins were discovered.

The history of that discovery is not for this discussion, but it is fascinating in its own right. What is pertinent for Los Angeles and our cultural footing is the relationship of ancient Herculaneum with a onetime Los Angeles resident become oil billionaire, and creator of museums and artistic trusts, J Paul Getty.

The Getty Villa in the Pacific Palisades is patterned after the style and floorplan of a particular rediscovered villa of Herculaneum. The Getty Villa contains a remarkable collection of artwork, including bronze and marble statues, Greek vases, and recreations of geometrically styled gardens and buildings.

I bring up the Getty Villa as a part of our local cultural heritage because it had seemingly fallen off the radar screen, having been closed for a number of years and only recently reopened. The history is tangled yet simple, as deep as you want to make it or as superficial as you would like. Basically, J Paul Getty began collecting art at a relatively young age. He created a place for public viewing of his collection next to his Pacific Palisades home. At the time of his death, he left a sum of $661 million for the institution that now includes the Getty Center and the Getty Villa. The sum would probably be at least twice the original amount if considered in 2014 dollars.

The trustees who received that money decided that they wanted to build a new center with the floor space and capabilities that the Pacific Palisades site lacked. The Getty Center was eventually constructed in the place we all know of today, overlooking Westwood and the 405. Anybody who has been there can tell you that it is a stunning place, with its myriad buildings existing in a hilltop fantasy world.

When the new Getty Center was ready to be opened in 1997, the Getty Villa in the Palisades was closed, and its art collection moved out. The Getty Center overlooking Westwood became an enormous success (not without some controversy over whether or not some of the ancient artworks should be returned to their countries of origin). The Getty Villa was slowly refurbished, adding new, semi-modern amenities including an amphitheatre and places to get food and drink.

Finally, nine years later, in 2006, the Getty Villa was reopened to the public. The collection of ancient art that had graced the Villa prior to 1997 was returned to it.

Nowadays, the Getty Center up on the 405 gets most of the press and most of the publicity. But the Villa seems to be making a comeback. Visitation in the post-2009 era has been on the order of half a million visitors a year. And that's to a place that has no admission charge (though they do stick you for the parking, to the tune of $15).

On a warm October day, I visited the Villa, sipped coffee on a veranda overlooking the canyon running down to the Pacific, and revisited the bronze statue known as the Victorious Youth. I learned about the style of a rich Roman's summer home, and some of the preservational properties of the volcanic residue known as pyroclastic rock. Mostly, I followed an enthusiastic group of people through the geometrically precise rooms and gardens.

One of the things we learned is that the Roman style was to build along an axis. When you look through the front door of the main museum structure, you are looking into a building patterned after the rediscovered villa in Herculaneum, a building that became known as the Villa of the Papyri. Your are also looking all the way through the building, and through more doors of other buildings that are aligned along a single axis, with a view of a faraway garden distantly visible through the last door.

That's essentially what is meant by the statement that the architecture involves building along an axis. There is also another axis at a right angle to the first. At a certain point in your walk through the villa, you see another set of open doors at right angles to the main axis, leading to their own distant garden.

Southern Italy gets hot and humid in the summer. The Roman architects installed their era's most effective form of air conditioning, which was water flowing into pools, moving through the air and providing an evaporative cooling effect. There are indoor pools and very long outdoor pools.

Not surprisingly, the Getty Villa has turned off most of its water features at the moment, in order to conserve water during the current drought. Even dry, the features are impressive, but would be even more so if the pools could be filled.

One thing became evident during my visit to the villa. There is a lot of architectural detail that most of us would miss if we only see it by ourselves. For this reason, the Getty Villa provides tour guides and docents who will tell you about the architecture and the gardens, and about the ancient art in the galleries.

For example, the villa has numerous styles of flooring. Some is carefully crafted marble, often using multiple colors. Other areas use small chips of marble polished into a smooth surface. Still others are put together in mosaic. In each case, the flooring is patterned after some known floor discovered in the region of Pompeii and Herculaneum.

Each stage of the journey through the Getty Villa involves modifications in internal architecture and flooring.

When it comes to art appreciation, to each his own. My favorites, besides the signature pieces that are heavily publicized, are a collection of busts of Roman emperors from the era overlapping the BC and AD divide. There was also a vase on display that goes back 2700 years, yet is in remarkably good looking condition, along with well preserved vases that are a little more than two millenia old. We might remember Keats and his Ode on a Grecian Urn. This would be reason enough to make a return visit to the Getty Villa.

(Bob Gelfand writes on culture and politics for CityWatch. He can be reached at amrep535@sbcglobal.net)