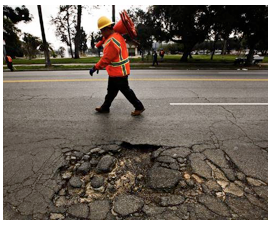 LA POLITICS-A year or so ago, the street paving trucks descended on our modest San Fernando Valley tract just north of Victory Boulevard and went about scraping the asphalt down to the road base and then pouring new asphalt and compacting the surface into a beautiful new road.

What was so mysterious was they seemed to pick every other street and the cul-de-sacs and then skip the rest including the street where I’ve lived for more than a quarter of a century.

It was reminiscent of when a few years earlier, city crews ramped all the sidewalk corners in the tract but did nothing to fix the stretches between the street corners so the residents of the handicapped center around the corner still found it was safer to use the streets and not the sidewalks to move about. So much for compliance with the Americans with Disability Act.

In the last two weeks, the city trucks were back and paved all the streets they missed last time. It was disruptive but efficient, an upgrade to the appearance of the tract and the quality of the lives the couple of hundred families who live here.

What was inexplicable is the spine of the two sides of the 50-yearold tract between Winnetka and Corbin is Oakdale and it is still just as cracked and rutted as ever.

My wife asked a construction supervisor about that and he laughed, saying that is how the city works everywhere, that the crews don’t have a clue why one street is being repaved and the one perpendicular to it is being left crumbling and broken.

As to Oakdale, no, he said, it isn’t on any schedule for repaving.

We all know that at the highest levels, City Hall is rotten, a closed system of corruption that serves the insiders, the influential, the players who grease the skids and make the system work for that narrow class of people who actually matter in this soulless city of four million.

What is baffling is why the bureaucrats with their grossly inflated salaries and benefits don’t do a better job.

I assume nobody, not even 2JobBob, the councilman for the area, really gives a damn if my insignificant little middle-class tract has newly paved streets or the one across the way.

Even I can’t believe there could be anyone with that kind of influence in my neighborhood to get us moved to the top of the list after all these decades of neglect.

All I can tell you is that with 20 or so staffers in every Council office, you would think that your public servants would be on top if every little detail going on in their district and making sure the people were getting the service they deserve.

Why would we expect less from the highest paid municipal officials and staff in America with all their perks and benefits? Why do we expect so little from them?

As a neighbor commented on nextdoor.com: "Oakdale is not even on the list for next year to be paved ... It is dangerous … my wife has gone to the councilman's staff to no avail. They just make excuses.”

(Ron Kaye is a lifetime journalist, writer and political observer. He is the former editor of the Daily News and the founder of the Saving LA Project. He writes occasionally for CityWatch and can be reached at Ron@RonKayeLA.com)