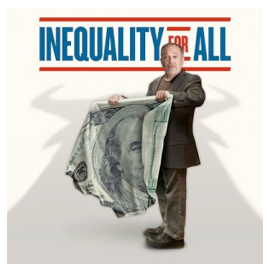 Meanwhile, wealthy elite live on Elysium, a space station modeled after a luxurious neighborhood in Malibu, California. Life expectancy on Elysium is three times longer than on the sweltering toxic earth, thanks to advanced medical technologies and a pristine environment.

Matt Damon stars as the character Max DeCosta, who is exposed to a lethal dose of radiation at his factory job. With five days to live, he must get to Elysium and climb into a “med bay,” a scanner that cures cancers and other life-threatening ailments.

Elysium is a cautionary tale, a dystopian vision of the kinds of extremes that might result if America’s growing economic inequality were to continue unabated.

A more earthly version of this story is opening this week in movie theaters around the country, Inequality for All. The documentary features former Secretary of Labor Robert Reich as the expert narrator.

In the film, Reich brings our collapsing middle-class standard of living and the expanding gap between rich and poor into stark focus.

He’s refreshing, funny, and upbeat about a serious and discouraging topic. Asked for an example of a country he thinks does a better job of addressing inequality, he replies, “The United States, between 1950 and 1975.”

He’s not kidding. The three decades after World War II were, compared to today, a rousing era of middle class expansion and shared prosperity.

Starting in the mid-1970s, we changed course. Wage and wealth inequality began to grow then, and it’s still ballooning now. A recent study by economists Emmanuel Saez and Thomas Piketty reveals that the top 10 percent of America’s earners took home more than half of all income in 2012, the highest share recorded since the government began to collect this data in 1917.

Inequality for All refrains from attacking the wealthy. Instead, Reich underscores how too much inequality is bad for everyone — including the rich. Extreme inequality undermines social mobility, economic stability, democracy, and healthy capitalism.

Nick Hanauer, a multi-millionaire venture capitalist and early investor in Amazon.com, argues in the film that his economic self-interest would be enhanced with a return of middle-class prosperity.

“We don’t need more trickle down tax cuts for the wealthy,” Hanauer warns. “We need a ‘middle-out’ economic policy that strengthens and expands our middle class. That’s what grows real wealth.”

Today’s wealth and income inequalities aren’t the consequence of differences in individual effort.

They’re the result of a rigged game, as the rules of the economy — such as tax, trade, and wage policies — have been tilted in favor of large asset owners at the expense of wage earners.

As a result, the past three decades have been a great time to grow a substantial nest egg or trust fund and a lousy period to depend on wages to pay the bills. It’s no surprise that so many U.S. wage-earners have taken on potentially unpayable debt to survive.

A September report from the U.S. Census Bureau reveals that median American household income today, adjusted for inflation, is no higher than it was for the equivalent household in the late 1980s. Meanwhile, stock prices and investment income for households in the top 5 percent have skyrocketed.

Documentary films don’t usually flourish at the theater box office, especially when they’re up against dramatic thrillers like Elysium. But if there is one documentary you watch this fall, see Inequality for All.

(Chuck Collins, a senior scholar at the Institute for Policy Studies, is the author of 99 to 1: How Wealth Inequality is Wrecking the World and What We Can Do About It.  This review was provided CityWatch by OtherWords.org)