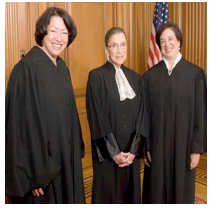 NYT REPORT - You can tell a lot about the Supreme Court by looking at who voted with whom. There are 36 possible pairs of justices, and in the term just concluded something interesting happened.

The top three spots were all taken by pairs of women. However you matched them up, Justices Ruth Bader Ginsburg, Sonia Sotomayor and Elena Kagan voted together at least 93 percent of the time.

The alignments are a product of ideology, not biology. “They are the three most liberal justices on the court, and it makes sense that they would often be in agreement,” said Pamela Harris, an adviser to the Supreme Court Institute at Georgetown’s law school.

The voting pattern highlighted the rightward drift of the fourth member of the court’s liberal wing, Justice Stephen G. Breyer, who broke from his usual allies in a series of important privacy cases.

In past years, it was often the conservative justices who voted together the most: Chief Justice John G. Roberts Jr. and Justice Samuel A. Alito Jr., say, or Justices Antonin Scalia and Clarence Thomas. This year, the right was more fractured. (The statistics come from Scotusblog, and the trends hold whether you look at all cases or just divided ones.)

The three female justices also dominated Supreme Court arguments in the last term. (Read the rest … including who asked the most and best questions … here)