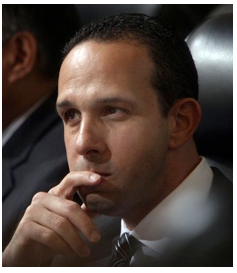 Donnal Poppe gave an overview of the pending project. The applicant is using the Eldercare Facility Ordinance to shoe horn in a massive project in pristine beautiful neighborhoods, targeting low density residential, and asking for even more zoning administrators adjustments  with reduced setbacks and side yards.

Poppe explained how the Baseline Mansionization Ordinance that applies to the local residents, which is meant to prevent large intrusive structures and overbuilding was not being applied to the applicant’s site.  This inequality of property rights is darn right illegal and gives a special privilege to the applicant.

I gave an historical overview of the many projects I have fought and won as well as my efforts to teach other Home Owners Associations and community groups how to fight a good fight in land use battles. I reminded them that they had the power to vote out both their neighborhood council members that voted to support the project as well as Councilman Englander.

As far as the zoning administrator’s determination was concerned, like all the other eldercare determinations I have read, they are collectively fatally flawed, and could not withstand a judge’s review.

This much I am sure.  It is worth taking each case to court. The community proved their willingness to fight these massive institutions in their low density neighborhoods by putting their money where there mouth is.

I provided them information on the newly formed Community Rights Foundation of Los Angeles that I am Vice President of.  We educate, organize, and provide sample appeals for the novice as well as appealing some cases ourselves.

We fundraise and as a pending 501 3c take donations to support our effort to keep Los Angeles livable.

We help connect groups together who are fighting similar projects. This foundation utilizes the talent pool from various organizations and community groups that we have helped along the way.

Donations support our ability to appeal cases, file law suits when necessary, and pay for printing and office supplies.  We have affluent and celebrity supporters who care about the future of Los Angeles and the impact of bad policy making decisions. But we rely on everyone for support.

Next, Mitch Englander, who had refused to make a decision about which side he supported until the N.V.A.P.C. (North Valley Area Planning Commission) hearing conceded that the Eldercare Facility Ordinance was ill timed, and targeted the valley low density properties.

When pressed by the community he not only agreed that the eldercare project was inappropriate but he also stated that he would introduce a motion that would relieve the community of the burdensome Eldercare Facility Ordinance.

As Alan Bell pointed out, the rewrite of zoning code is under review and this patch work of poorly written ordinances can be eliminated and a new improved code can emerge with the help of community input.

Indeed, a careful watch is needed! I don’t know about you but I prefer the 1947 version of neighborhood planning than the desperate pandering to developers money making schemes that our communities have had to fight the past 3 decades.  I prefer strong zoning regulations and long term goals. I prefer a real census of our needs not speculation. So get involved in the process.

While the current applications for eldercare facilities must be heard, I have yet to see one that is reasonable, equitable, and can be mitigated.  Englander, however, feels that the one in West Hills may be reasonable.  This eldercare facility project would be over 200,000 sq. ft. abutting low residential and over four stories. It would bastardize the quaint historical site abutting the project.

Driving along Sherman Way in that area you can see miles of residential and a sprinkling of business. Nothing of this size and certainly not needed.

The West Hills community is fighting this project as well and attended the Northridge town hall. They were aggrieved by Englanders statement.  This was the second town hall held addressing the Eldercare Facility Ordinance.

The Tarzana Property Owners Association also held a town hall at the Braemar Country Club on May 7th. Dennis Zine Introduced Frank Bush from D.B.S., Bill Larsen from the City Attorney's Office, and Alan Bell from Planning and then Zine left to continue his bid for Controller of LA.

David Garinkle, the President of T.P.O.A. led a lively discussion on the issue of the Eldercare Facility Ordinance and how it has continuous approval by the zoning administrators despite the obvious incompatibility and lack of proof that there is indeed a “city wide demand” for it.

With the Affordable Care Act rolling out and moving towards in home care for the elderly in order to reduce cost, why would the city of Los Angeles continue on a path that is counter intuitive to health care reform.  Many states and cities have “aging in place” initiatives and its time for Los Angeles to wake up and join the band wagon.

Let’s stop burdening elders with unaffordable care, making them the highest increase in both homelessness and bankruptcy.  Allow families to build granny flats where it is feasible and won’t impact animal keeping rights.  This alone will help families keep their home in tough economic times. It will create new revenue for the city and keep communities intact and livable.

C.R.F.L.A will continue to reach out, and help preserve Los Angeles. Our President, Colleen Marmor, has just the enthusiasm needed to move this organization forward and take back Los Angeles.

We shall see if Englander has the resolve to end this assault on his community.