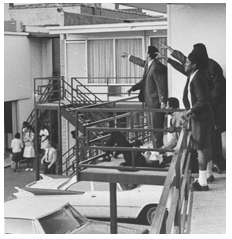 VOICES - Should the United States government be allowed to assassinate its own citizens? That question was in the air briefly not long ago. April 4 is an excellent day to revive it:   On April 4, 1968, the government was part of a successful conspiracy to assassinate the Rev. Dr. Martin Luther King, Jr.

That’s not just some wing-nut conspiracy theory. It’s not a theory at all. It is a fact, according to our legal system.

In 1999, in Shelby County, Tennessee, Lloyd Jowers was tried before a jury of his peers (made up equally of white and black citizens, if it matters) on the charge of conspiring to kill Dr. King. The jury heard testimony for four full weeks.

On the last day of the trial, the attorney for the King family (which brought suit against Jowers) concluded his summation by saying: “We're dealing in conspiracy with agents of the City of Memphis and the governments of the State of Tennessee and the United States of America. We ask you to find that conspiracy existed.”

It took the jury only two-and-half hours to reach its verdict: Jowers and “others, including governmental agencies, were parties to this conspiracy.”

I don’t know whether the jury’s verdict reflects the factual truth of what happened on April 4, 1968. Juries have been known to make mistakes and (probably rather more often) juries have made mistakes that remain unknown.

But within our system of government, when a crime is committed it’s a jury, and only a jury, that is entitled to decide on the facts. If a jury makes a mistake, the only way to rectify it is to go back into court and establish a more convincing version of the facts. That’s the job of the judicial branch, not the executive.

So far, no one has gone into court to challenge the verdict on the King assassination.

Yet the version of history most Americans know is very different because it has been shaped much more by the executive than the judicial branch. Right after the jury handed down its verdict, the federal government’s Department of Justice went into high gear, sparing no effort to try to disprove the version of the facts that the jury endorsed -- not in a court of law but in the “court” of public opinion.

The government’s effort was immensely successful. Very few Americans are aware the trial ever happened, much less that the jury was convinced of a conspiracy involving the federal government.

To understand why, let’s reflect on how history, as understood by the general public, is made: We take the facts we have, which are rarely complete, and then we fill in the gaps with our imaginations -- for the most part, with our hopes and/or fears. The result is a myth: not a lie, but a mixture of proven facts and the fictions spawned by our imaginings.

In this case, we have two basic myths in conflict.

One is a story Americans have been telling since the earliest days of our nation: Back in not-so-merry old England, people could be imprisoned or even executed on the whim of some government official. They had no right to prove their innocence in a fair, impartial court. We fought a bloody war to throw off the British yoke precisely to guarantee ourselves basic rights like the right to a fair trial by a jury of our peers. We would fight again, if need be, to preserve that fundamental right. This story explains why we are supposed to let a jury, and only a jury, determine the facts.

(By odd coincidence, as I was writing this the mail arrived with my summons to serve on a local jury. The website it directed me to urged me to feel “a sense of pride and respect for our system of justice,” because “about 95 percent of all jury trials in the world take place in the United States.”)

Then there’s another myth, a story that says the federal government has only assassinated American citizens who were truly bad people and aimed to do the rest of us harm; the government would never assassinate an innocent citizen. Most Americans devoutly hope this story is true. And most Americans don’t put MLK in the “bad guy” category. So they resist believing what the legal system tells us is true about his death.

Perhaps a lot of Americans would not be too disturbed to learn that the local government in Memphis or even the Tennessee state government were involved. There’s still plenty of prejudice against white Southerners. But the federal government? It’s a thought too shocking for most Americans even to consider. So they fill in the facts with what they want to believe -- and the myth of James Earl Ray, “the lone assassin,” lives on, hale and hearty.

Since that’s the popular myth, it’s the one the corporate mass media have always purveyed. After all, their job is to sell newspapers and boost ratings in order to boost profits. Just a few days after the trial ended the New York Times, our “newspaper of record,” went to great lengths to cast doubt on the verdict and assure readers, in its headline, that the trial would have “little effect” -- an accurate, though self-fufilling, prophecy.

Imagine if the accused had been not a white southerner but a black man, with known ties not to the government but to the Black Panther Party. You can bet that the trial verdict would have been bannered on every front page; the conspiracy would be known to every American and enshrined in every history book as the true version of events.

None of this necessarily means that the federal government and the mass media are covering up actual facts. Maybe they are, maybe they aren’t. Again, I don’t claim to know what really happened on April 4, 1968.

But there surely were people in the federal government who thought they had good reason to join a conspiracy to get rid of Dr. King. He was deep into planning for the Poor People’s Campaign, which would bring poor folks of every race and ethnicity to Washington, DC. The plan was to have them camp out on the Mall until the government enacted major economic reforms to lift everyone out of poverty. That meant redistributing wealth -- an idea that made perfect sense to Dr. King, who was a harsh critic of the evils of capitalism (as well as communism).

It also meant uniting whites and non-whites in the lower income brackets, to persuade them that the suffering they shared in common was stronger than the racial prejudice that divided them. Dr. King did not have to be a prophet to foresee that the longer whites blamed non-whites, rather than the rich, for their troubles, the easier it would be to block measures for redistributing wealth. The unifying effect of the Poor People’s Campaign spelled trouble for those whose wealth might be redistributed.

At the same time, Dr. King was the most famous and respected critic of the war in Vietnam. By 1968 he was constantly preaching that the war was not just a tragic mistake. It was the logical outgrowth of the American way of life, based on what he called the inextricably linked “triplets” of militarism, racism, and materialism. Had he lived, the Poor People’s Campaign would have become a powerful vehicle for attacking all three and showing just how inseparable they are.

So let’s assume for a moment, just for the sake of argument, that the jury was wrong, that James Earl Ray did the shooting and acted alone. The federal government would still have good reasons to suppress the conspiracy myth. Essentially, all those reasons boil down to a matter of trust.

There is already immense mistrust of the federal government. Imagine if everyone knew, and every history book said, that our legal system has established as fact the government’s complicity in the assassination.

If the federal government has a convincing argument that the jury was wrong, we all deserve to hear it. There’s little advantage to having such uncertainty hanging in the air after 45 years. But the government should make its argument in open court, in front of a jury of our peers.

In America, we have only one way to decide the facts of guilt or innocence: not through the media or gossip or imagination, but through the slowly grinding machinery of the judicial system. At least that’s the story I want to believe.

(Ira Chernus is Professor of Religious Studies at the University of Colorado at Boulder and author of Mythic America: Essays and American Nonviolence: The History of an Idea.   He blogs at MythicAmerica.us where this piece was first posted.)