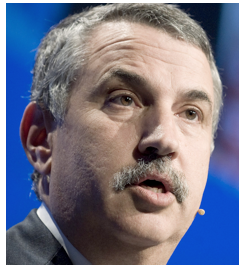 BLOG SOUP - I was going to write a contemptuous screed about Tom Friedman's Grand Bargain column but just couldn't summon the energy.

But Dean Baker did.  It's all good, but this excerpt is a doozy:

Our choice today is not 'austerity' versus 'no austerity.' That is a straw man argument offered by both extremes. It’s about whether we phase in — in the least painful way possible — a long-term plan that balances our need to protect the most vulnerable in this generation while funding the most opportunities for the next generation, and still creating growth. We can’t protect both generations in full anymore, but we must not sacrifice one for the other — favoring nursing homes over nursery schools — and that’s what we’re on track to do."

You have to love the line: "We can’t protect both generations in full anymore."

Somehow Friedman missed the fact that the problem we are facing is a lack of demand. We need people to spend more not less. How does austerity reduce unemployment and get the economy back to full employment? It hasn't worked in Ireland, Greece, Spain, the United Kingdom or anywhere else that can be identified. How on earth does the fact that we now face a huge gap in demand mean that we are less well-situated to "protect both generations." (Of course he doesn't say anything about income distribution.)

Again, if Friedman could be taught some intro economics it would be hugely helpful here. Suppose Friedman gets his wish for a grand bargain and everyone working today knew that they would be seeing sharply lower Social Security and Medicare benefits in the future. All of those consumers who Friedman thinks are paralyzed by uncertainty will suddenly realize that they can be certain that they will need more money to support themselves in retirement because the Thomas Friedmans of the world have taken away their Social Security and Medicare.

Insofar as possible, these people would drastically increase their savings. That means cutting back their consumption. Now that should lead to a rip-roaring recovery.

Okay, now for the teaching part of this post. We know that Thomas Friedman gets most of the information for his columns from cab drivers. Print out copies of the graphs here on the investment share of GDP and consumption as a share of disposable income. Next time you have to take a taxi be sure to share them with the driver. If enough people do this, at some point Friedman will come into contact with a cab driver who can show him the graphs. Then he may learn a little economics and we would no longer have to see painfully wrongheaded columns on the economy in the Sunday NYT.

Also keep in mind that Tom Friedman is not just another ink stained wretch at the NY Times. He made his billions the hard way: he married it.     Heirs to protect ...

(Digby is the pseudonym of progressive political blogger Heather Parton from Santa Monica, California who founded the blog Hullabaloo … where this commentary first appeared.)