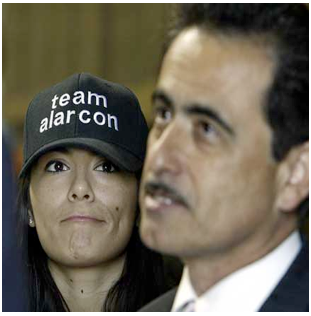 LA WATCHDOG - Councilmember Richard Alarcon and his 33 year old daughter, Andrea, the politically appointed President of the Board of Public Works, are hitting up our Department of Water and Power and the Bureau of Sanitation for $7.5 million to fund two exhibits at the troubled Children’s Museum / Discovery Science Center of Los Angeles (the “Children’s Museum”).
But once again, the use of $3.9 million of DWP Ratepayer money to fund yet another “pet project” of the City Council is totally inappropriate, if not illegal, especially since our water and power rates are likely to double over the next decade.

Likewise for the $3.6 million being plundered from the Bureau of Sanitation, a division of Andrea’s Department of Public Works.  This Bureau is funded by the Solid Waste Fee which has more than tripled in the Villaraigosa era, the Sewer Service Charge which is expected to increase 77% over the next ten years, and the Citywide Recycling Fee that is paid by all private refuse haulers.
According to DWP, this is a “creative” way to “target” current and future customers and to “institute behavior changes early and/or perhaps bypass certain energy and water wasting behaviors altogether.
But $3.9 million to reach a very limited audience consisting mostly of elementary school students!  Please.  Any advertising executive who recommended this expenditure would be summarily fired.
But DWP had little choice since it was strong armed by Richard Alarcon into approving this pet project in return for his not opposing the recent 11% increase in our power rates.
The Bureau of Sanitation also had no alternative since Board President Andrea Alarcon used her position of authority to extract $3.6 million of our money to support the previously bankrupt Children’s Museum.
Overall, the City is proposing to spend a total of $21.3 million (including the $7.5 million from DWP and BOS) to open the Children’s Museum by March of 2015 so as to avoid the repayment of $7.5 million in State grant monies and up to an estimated $16 million in public funds already expended on this project.
But this is just more good money down the drain.
Currently, the Children’s Museum is a 58,000 square foot, two story, slanted roof, architectural eyesore surrounded by a chain link fence in Hansen Dam Park, next to the Lake View Terrace Library, in a relatively isolated area in the northern reaches of the City, 21 miles from City Hall.
The facility is controlled by the Department of Recreation and Parks which took over the building in 2009 when the previous operator declared bankruptcy when it was unable to cover the more than $50 million needed to open the museum.
While the Recreation and Parks has entered into a contract with the highly respected Discovery Science Center, an Orange County nonprofit organization, to operate the Children’s Museum, it has been unable to attract outside sponsors for its exhibits or to raise sufficient funds from charitable organizations.
The City is also projecting operating losses of $5 million over the next five years, but that is based on optimistic projections of revenues from admissions and concessions as well as increased levels of fund raising and service contracts.
On Friday, December 14, the City Council should not approve the current plan to open the Children’s Museum.
Rather, the City Council should assert jurisdiction over this action by the round heeled DWP Board of Commissioners who have no respect for the Ratepayers and their hard earned money.
The City Council should also assert jurisdiction over the decision by DWP Board of Commissioners to spend $1.2 million of Ratepayer money on the implementation of the Los Angeles River Revitalization Master Plan.
The Energy and Environment Committee, chaired by Jose Huizar, should also demand a full investigation of all DWP pet and noncore projects, including, but certainly not limited to, the Children’s Museum, the LA River, the Elysian Park Reservoir, the Silver Lake / Headworks Reservoir / River Supply Conduit projects, the LAUSD solar contract, the Fiber Optic Network, and the Joint Training and Safety Institutes.
Of course, this might be difficult since Richard Alarcon is a member of the Energy and Environment Committee and an ally of Jose Huizar as was evident when they honchoed the Exclusive Trash Franchise deal through the City Council, despite the added cost to the business community of over $150 million.
This investigation should be conducted by DWP with oversight provided by the Ratepayers Advocate and an independent committee of residential and commercial Ratepayers.  Of course, the findings will need to be disclosed to the public in a timely manner.
At the same time, DWP and the City should establish a protocol where all contacts between DWP and City Hall are controlled through a central location, where any meetings are fully disclosed and documented in writing, where meddling in the affairs of DWP by Council Members and their staff is limited, and where any expenditures by DWP or assumption of responsibilities by DWP are disclosed in advance.
If the City Council decides to toss good money after bad, that is their decision, but leave DWP, the Bureau of Sanitation, and their Ratepayers out of the equation as we are not City Hall’s slush fund or ATM.
Finally, this underhanded theft of DWP and BOS Ratepayer money by Richard Alarcon and his cronies on the City Council is just another excellent reason not to trust City Hall and for Angelenos to reject the backroom efforts by the Herb Wesson and his puppets on the City Council to increase our sales tax to an economy killing 9.5%.
(Jack Humphreville writes LA Watchdog for CityWatch. He is the President of the DWP Advocacy Committee,  the Ratepayer Advocate for the Greater Wilshire Neighborhood Council, and a Neighborhood Council Budget Advocate. Humphreville is the publisher of the Recycler Classifieds -- www.recycler.com. He can be reached at: lajack@gmail.com)
-cw
CityWatch
Vol 10 Issue 100
Pub: Dec 14, 2012