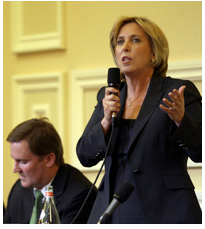 BILLBOARD WATCH - All four major candidates for the L.A. mayor’s office said at a public forum this past weekend that the city should not make a deal with Clear Channel and CBS Outdoor to save their 100 digital billboards if the California Appeals Court invalidates the permits issued for the signs.

City Council members Eric Garcetti and Jan Perry, City Controller Wendy Greuel, and radio talk show host Kevin James also said that billboard companies should be asked to bring more than 1,000 unpermitted and illegally altered conventional billboards into compliance with city codes, even though an obscure state law has been cited as “grandfathering” the signs.  If the companies fail to voluntarily comply, the city should pursue legal action as well as punitive damages, the four candidates said.
The public statements at a forum held by the Council District 5 Coalition of Homeowners Associations are in sharp contrast to actions of the City Council, which voted Oct. 16 to direct city planners and legislative analysts to draft legal agreements with Clear Channel and CBS Outdoor that would “address digital sign issues” and provide revenue to the city and the takedown of some conventional billboards.  While some councilmembers protested otherwise, it was clear to almost everyone that the companies were prepared to offer revenue and other benefits only in exchange for being allowed to keep their digital billboards
Garcetti and two other councilmembers voted against that motion, but Perry voted for it. She didn’t say at Saturday’s forum if she had undergone a change of heart on the issue since that vote.  Garcetti also made a reference to that motion, which an L.A. Times article revealed had been written by a Clear Channel lobbyist, by saying “we have billboard companies that are writing motions in the City Council.”
In a hearing two weeks after the council action, the appeals court issued a tentative ruling upholding a lower court decision that threw out the 2006 lawsuit settlement giving Clear Channel and CBS Outdoor the right to convert 840 conventional billboards to digital. A total of 105 permits were issued before the city council passed a moratorium and then a permanent ban on the sign conversions and at the appeals court hearing the presiding judge said the panel was inclined to order those permits voided.
The issue of unpermitted and unlawfully altered billboards has simmered for years, but came to a head just two weeks ago, when the city’s Department of Building and Safety released a database containing the results of a citywide billboard inventory and inspection program.  Preliminary inspection of the raw data, which was released only after a lawsuit was filed against the department, shows that more than 1,000 of a listed 5,784 billboard structures in the city were either erected or altered without a permit.
According to the database, those alterations are most commonly the addition of a second face to a single-sided billboard, although many of the permitted billboards are also larger or taller than specified in their permits.  A large number of billboards were also listed as having structural, electrical, or maintenance violations.
(Dennis Hathaway is the president of the Coalition to Ban Billboard Blight. He can be reached at: Dennis@BanBillboardBlight.org)
-cw
CityWatch
Vol 10 Issue 98
Pub: Dec 7, 2012