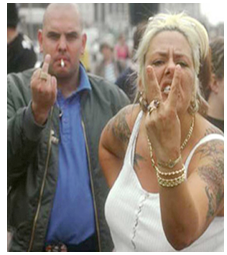 ALPERN AT LARGE - The Urban Dictionary defines the provocative word “scumbag” as “a person of poor judgment and no class”, or “a reprehensible person with no morals and holds no regard for anyone but him/herself” or “a person with no sense of propriety, decency or discretion”.  In other words, the word refers to narcissists, amoral self-absorbed snobs, and individuals otherwise obsessed with their own self-importance.
By and large, these reprehensible individuals arrogantly and conceitedly take, tear down, and otherwise destroy people and institutions which have been part of the fabric of our society for their own immediate gain, and without any consideration of the consequences of their actions.  Unfortunately, our modern American society has been inundated by these scurrilous individuals, who appear to be the big winners while those who adhere by the rules appear to be the losers.