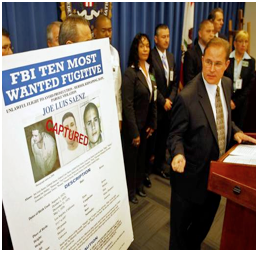 RUSS REPORT - On November 22, 2012, Mexican authorities and the Federal Bureau of Investigation (FBI) captured 37 year-old Jose Luis Saenz, a fugitive of 14 years, who became the 467th fugitive captured from on FBI Ten Most Wanted list. Saenz was arrested in Guadalajara, Mexico and because he was a US citizen, was returned to Los Angeles.
Saenz, a hard-core Cautro Flats gang member with several aliases and birthdates, was released on parole in November 1996 and supervised at the highest level of supervision because of his extensive record of both violent and non-violent criminal offenses and gang affiliations.
Authorities believed that Saenz was residing in Mexico but was entering and exiting the USA at will.

Intelligence led authorities to believe Saenz was a hired killer for a drug cartel and in 2009, was placed on the FBI’s Ten Most Wanted List and featured on television’s America’s Most Wanted.
In December 1997, he was taken into custody for parole violations and again released on parole in February 1998. Sometime later, Saenz eluded parole supervision and the Board of Prison Terms obtained a Parolee at Large (PAL) Arrest Warrant.
Just months AFTER the PAL arrest warrant was issued for Saenz’s arrest, he became a named suspect for the killings of two rival gang members in the East Los Angeles/Hollenbeck area. Two weeks later, he became a named suspect in the kidnapping, rape and murder of his girlfriend, the mother of his child, in the County area of East Los Angeles.
In 2008, in Whittier, Saenz was implicated in the murder of a drug dealer, who neglected to repay a drug cartel $600,000, and the wounding of another person during that spree. The murder of the drug dealer was captured on video and has been aired several times on television.
But in early 2005, Saenz’ PAL arrest warrant was removed without explanation and a new warrant had to be issued that became effective February 2005.
According to California Department of Corrections and Rehabilitation (CDCR) and Division of Adult Parole Operations (DAPO) operations manual, all PAL arrest warrants must be reviewed by the Board of Parole every five years.
The Board of Prison Terms did not elect to recall Saenz’s arrest record in 2010. The arrest warrant remained in place until August 17, 2012 when Administrators in Region 3 Parole having full knowledge that Saenz remained a wanted fugitive and named suspect in four murders, REQUESTED the removal of the Arrest Warrant and the Board of Parole Hearings discharged Saenz while he was still on PAL status. Saenz became a PAL in 1998 PRIOR to allegedly killing anyone.
Luis Patino Spokesman- CDCR told Reporters, “CDCR’s parole agents and special law enforcement task forces spent many hours working toward the eventual capture of Jose Luis Saenz when he was a fugitive parolee-at-large wanted for four murders.   Our parole agents and special teams conducted numerous searches for him and at one point even used scores of agents to covertly stake out a relative’s funeral when it was believed that he might attend.
But when it became clear during a careful legal review of his case that changes in the Penal Code had removed CDCR’s jurisdiction over him, on August 17, 2012, CDCR discharged his parole status, thereby deferring to federal law enforcement agencies whose jurisdiction could not be challenged.
CDCR no longer had jurisdiction over Saenz pursuant to the 2009 California law that established Non-Revocable Parole (NRP), Penal Code Section 3000.03.  NRP applied to parolees at the time who had been convicted of non-serious, non-violent, and non-sexual offenses.  It essentially removed CDCR’s jurisdiction over those parolees, meaning that CDCR could not place a hold on them or revoke their parole.
Legally, the serious and violent convictions for which authorities could continue to supervise parolees applied only to convictions, not allegations or charges which have not yet been heard in court, even those as serious as the heinous crimes alleged in this case.
Since Saenz’ commitment offense was possession of a controlled substance, (by law, a non-serious, non-sex, and non-violent offense), CDCR no longer had jurisdiction over Saenz, so we elected to remain members of the task force searching for Saenz, but deferred to the undisputable and active federal arrest warrants which made him subject to immediate arrest.
NRP is no longer in effect for inmates who paroled after October 1, 2011 since AB109 now places every offender on active supervision upon release.
Caroline Aguirre, a retired Parole Agent, was Saenz original Parole Agent.  Aguirre said, “Patino made the statement that Saenz, under the guidelines and policy of NRP, should have been re-classified and placed under NRP status. This is a lie. Patino was very much aware of the fact in 2009, that Saenz was a wanted felon and a named suspect for four very violent gang related murders.
“Saenz became a PAL in 1998 prior to his alleged killing spree. On occasion, there are circumstances when non-violent, low-level criminal offenders who are on PAL status are considered for reclassification to NRP- but not a PAL who has been named a suspect in four brutal gang related murders.
“Patino was also wrong by suggesting that Saenz fell within the purvue of AB 109. That law did not go into effect until October 1, 2011 and it is not retroactive. Patino, unequivocally, knew this when he released his statement to a reporter.”
Aguirre further stated, “There is no honest and true justification as to the reason parole administrators from Region 3 requested that Saenz parole arrest warrant be recalled and that he be discharged from parole.
“The Department of Corrections and Rehabilitation, today, is making a sincere attempt to reduce their parole case loads, but only in an effort to save money and eventually dismantle parole supervision altogether within the state of California. In doing so, they will place entire communities throughout the State in harm’s way.”
Editor’s Note:  Caroline Aguirre, Parole Agent-Retired, who had 24 years experience with the California Dept of Corrections and Rehabilitation, contributed to this article.
(Katharine Russ is an investigative reporter. She is a regular contributor to CityWatch and to the North Valley Reporter. Katharine Russ can be reached at:   Katharine.russ@charter.net ) –cw
CityWatch
Vol 10 Issue 97
Pub: Dec 4, 2012