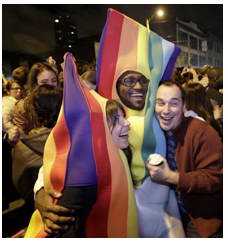 A RAINBOW AT ELECTION’S END - Wow, what a big, gay, historic night! Marriage won at the ballot box for the very first time, and we reelected Barack Obama, the most pro-equality president in our country’s history, to a second term as the 44th President of the United States of America.

This election represents a landslide for equality — not necessarily in any one race, but in the aggregate, LGBT equality won handily at the voting booth in this historic election.
But before 9 p.m. on the West Coast, we could report with confidence that both Maryland and Maine had approved marriage equality on ballot measures, making them the very first states to do so by popular vote. In 32 popular votes, marriage equality had been rejected by voters. Finally the miserable 32-0 losing streak was soundly broken tonight.
Mainers voted in favor of Question 1, and Maine is expected to issue marriage licenses in mid-December. Voters approved Question 6 in Maryland, upholding the state's marriage equality legislation passed earlier this year.
And in Washington State, voters were on the verge of upholding marriage equality legislation signed by governor Christine Gregoire earlier this year. And in Minnesota early indications gave reason for optimism.
Tammy Baldwin was elected to the U.S. Senate from Wisconsin, making her the first openly LGBT senator. And in Baldwin’s old seat in the House of Representatives, Wisconsin voters elected openly gay Mark Pocan tonight, and that succession is also an historic first.
Out Rep. Jared Polis has won his bid for a third term representing Colorado’s second congressional district. David Cicilline, Rhode Island’s U.S. congressman, was reelected after a fiercely competitive race.
One of my first thoughts is to compare this night to election night four years ago. That was a night of heady highs, reveling in the historic moment of electing our first black president, and dismal lows, in the crushing defeat that was Prop. 8. We loosed victory balloons, confetti, and ticker tape for Obama in West Hollywood, and hugged one another through tears of defeat, knowing that the most populous state in the union had rejected our equal access to the rights afforded to all other taxpaying citizens.
Our rights, our very existence, was used as a wedge issue to incite hate and panic.
This year felt very different, and though many of us put faith in the polling that indicated that President Obama would be reelected — holding the fate of the Supreme Court and the pro-equality executive orders in the balance — we still looked with baited breath at the exit polling, and examined the returns as they came in. And we erupted into cheers when Ohio was called in favor of Obama, cementing victory. This night was an unequivocal triumph for LGBTs, and we’d be damned if we weren’t going to celebrate it.
The White House will not change hands, nor will the Senate or House change much in terms of party composition. So we’re faced with a question: What will change? More specifically, what will change in the Republican party?
We know what trajectory the Democratic party is on, a path toward equality, a path that follows the lead taken by the county’s population. A majority of Americans want equality for their LGBT brothers and sisters, and we’ve indicated exactly that in our choice for a pro-equality president, in our voting on marriage rights on ballots, and in our election of openly LGBT congress people. Democrats, on the whole, recognize this. But the polarization is lopsided. The Dems haven’t moved to the left on this, they’ve simply expanded the embrace to include LGBTs in the rights granted other citizens. Meanwhile the GOP has frozen into an unmovable rigidity, and if it doesn’t thaw, it will splinter and crack.
Will the GOP be intractable on LGBT rights, continuing to enshrine hate in the party platforms? No longer can an aging, antigay, homogenous electorate determine any general election. Will the GOP retrench and ignore this fact, grasping at ever more hostile conservative positions, seeking to harness anxiety about a majority minority coalition, one that includes LGBTs? Will the GOP finally understand that the earth spins on, that an absolutist antigay position, such as Romney and Ryan held, is out of step with the country?
This election wasn’t simply about LGBT issues, but equality is the single most important thing we can ever vote for. If we don’t have equality, truly we have nothing.
One thing that’s certain since this election: Seeking equality for all Americans is no longer a risky proposition. LGBT candidates can win at the ballot box. And fighting for equality isn’t out of step with a nation that had its birth in the notion of the fundamental equality of all people.
(Matthew Breen is Editor-and-Chief at the Advocate where this piece was first posted. See also commondreams.org)
-cw
CityWatch
Vol 10 Issue 90
Pub: Nov 9, 2012