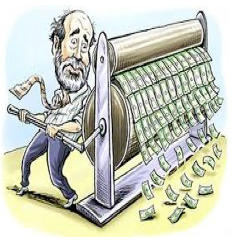 RANDOM LENGTHS - There has been a grand display of hand wringing lately about deficit spending. So much so that three cities in the state of California have committed civic suicide and voted to file for bankruptcy rather than face the music of declining revenues.

Every Republican, from Mitt Romney on down, is crying about the national debt, now topping $15.8 trillion, and the news media only amplifies the conservative mantra “the sky is falling” without ever putting it in historical perspective.

Nary a word is spoken about how a $9.5 trillion deficit was created under President Ronald Reagan and President George Bush Sr. or that the national debt was, in magnitude, much larger during World War II.

Even the Democrats on the Los Angeles City Council and the state legislature in Sacramento are spooked into this twisted mindset—a mindset pushed by the likes of Los Angeles’ chief administrative officer, Miguel Santana.  Who can blame him for drowning his sorrows while facing a $200 million shortfall?

He, like others, blames the pension funds for creating a “structural deficit.” They are wrong. The pension contracts do need adjusting, but are only the easiest target of a far more complex deficit fueled by bond rate swaps, fiscal mismanagement and even fraudulent actions by certain investment banks like Northern Trust, who hold billions of our city’s debt and control the investments.

Let me explain one simple fact. Reach in your pocket and pull out all the paper money you have and examine them carefully. These are IOUs issued by the US Treasury. That’s why it says “In God we trust.” We have been honoring these IOUs for more than 150 years.

Back during the American Civil War, President Abraham Lincoln was spending more on the war than was coming in, probably because of war profiteering by Northern industrialists. However, at a critical point in the war, the banks just stopped lending the government “real” money. The troops needed to be paid or the war would be lost. So the president ordered the printing of “green back” IOU’s.

In other words, Lincoln basically created an entire credit line based upon the faith of the people in the ability of the republic to pay them back. Or you might see it as raising the debt ceiling. In those days you could actually turn in the paper money for gold coins.

So what does this little factoid have to do with us now? Just think about it. We have been running, not one, but three wars (two in the Middle East and one on drugs) for more than a decade.

The war profiteers, currently called civilian contractors, have been draining the treasury at lightning speed and the cost of waging war has grown since 1861. Although the banks, the Saudis and Chinese are still loaning the federal government money by buying treasury bonds, the bond raters have dropped the credit ratings for many states and cities.

This of course costs citizens millions more to finance their debt. The manipulation of bond rates couldn’t be more criminally explained than the recent example of London’s Bank, which was fined more than $450 million for manipulating the LIBOR index, the interbank interest rate that underpins hundreds of trillions of dollars in transactions around the world. You probably only recognize the LIBOR index as the rate that determines the mortgage on your home or commercial properties.

What even further exacerbates the deficit woes of our city and state are bond swaps. This is something I discovered this past year when I was studying the roots of the Los Angeles city pension fund losses. Like most cities, we are losing millions each year by this form of legal robbery.

In short, what firms like Goldman Sachs do is buy a city’s bond debt at a fixed rate—5 percent in this case—even though normally a bond’s interest rate is determined by rating agencies and the bond market. The fixed rate is a hedge for the city against rising bond rates, while giving it a predictable pay out.

What has been happening for the past four years is that the Federal Reserve has been charging nearly zero percent interest on the monies loaned to banks, who in turn use these monies to purchase city bonds, thereby collecting the difference between the fixed rate on those bonds and the near zero interest on those federal loans.

This cost the city millions in interest payment, particularly with this current low market rates. Some cities are starting to wake up, but not Los Angeles.

If the city were to save even one percent of interest on a $20 billion bond they would save $200 million per year or an amount equal to this current year’s deficit.

In Oakland, California the city council voted to demand Goldman Sachs re-negotiate with the city to get out of a 1998 interest rate-swap deal without having to pay a $15 million penalty. A recent report explains that because of the locked-in rates, the deal was costing the city $4 million a year. Oakland estimates they have lost $17.5 million on the deal so far, even though the city bought back the underlying bonds four years ago.

But as a result of that $15 million penalty, the city will have to continue losing money on the deal until 2021. This is only part of the reason why cities like Los Angeles are losing revenue in ways that can’t be easily pinned onto retirement contracts or overpaid employees as Santana’s office or others in City Hall are trying to do.

Oakland, however, is on the right track—structural renegotiation of its bond debt. Then they should be looking at how their pension funds are managed. Los Angeles should do the same before they end up jumping off the Vincent Thomas Bridge screaming bankruptcy like Stockton and San Bernardino.

(James Preston Allen is the Publisher of Random Lengths News and an occasional contributor to CityWatch. More of Allen and other views and news at  randomlengthsnews.com where this column was first posted) –cw