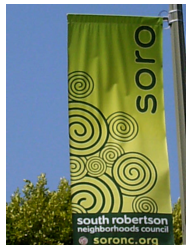 CITYWATCH - The piñata that is LA’s neighborhood council system has taken some hits lately. Not new occurrence. Been part of the process since their inception.

Not enough folks showing up at NC elections. LA-32 NC evicted by a Councilman Huizar. Silver Lake NC getting grief for wanting a street festival to pay it past due fees and respect the community before they get permitted for 2011. A mid-city council needing cops to maintain the peace at board meetings.
You get the idea. It’s been a rough few weeks.

Now comes some good news so let’s celebrate a bit.

The Board of Neighborhood Commissioners is a policy body. They do not, as some mistakenly think … including some BONC commissioners … manage or administer or run LA’s NC system. Which doesn’t mean they’re not capable of doing their share of damage.

The BONC is the last word on applications for certification, recommendations to decertify, requests for bylaws changes … of neighborhood councils.

The rules that govern LA’s System of NCs allows for these BONC rulings to be appealed … to the City Council. It would appear that for the first time ever an LA council has filed an appeal … and won.

Here’s how it went down: Doug Fitzsimmons (President) and his South Robertson Neighborhood Council petitioned the Commission to adjust their boundaries. They followed the rules. The Department of Neighborhood Empowerment mangled the process. The BONC bungled the ruling … which went against South Robertson.

SORO could have taken the get angry, get even path but instead opted for the high road. They made a direct appeal of the BONC decision to the City Council … but not to ask for the ruling to be overturned. They asked for a special committee to help remove the flaws in the system and to make the process whole … so that those who come after do not have to experience the angst and frustration  they were made to endure.

The City Council supported their appeal and the special committee is on its way … along with a six month deadline for making things right.

The appeal was well written and is an easy read. It provides a capsule on what SORO went through and a brief look at their thinking on the plot-twisting resolution they asked for. (Click here)

“The next step,” Fitzsimmons writes, “will be to work with (Councilman Paul) Krekorian’s new Arts, Parks and Neighborhoods Committee to establish the ordinance review panel.

“But for now, we’re thrilled that the first direct appeal by a Neighborhood Council to the City Council was a success, and that we’ve managed to turn and ugly, divisive situation into an opportunity to make the system stronger and more responsive for all NCs.”

A few of LA’s neighborhood councils have figured it out. Therein lies the hope for the System’s future.