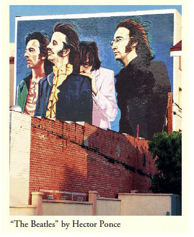 MURAL CAPITOL - No tour of Los Angeles would be complete without a picture of the Hollywood sign.

Every guide makes sure to mention that the sign had nearly fallen down until the local Chamber of Commerce and various entertainment figures stepped in to replace it.  While we can all agree that allowing one of the city’s prime tourism attractions to nearly slip away was inexcusable, the same tragedy is unfolding today all across town when it comes to public art murals.

Los Angeles is often referred to as the mural capital of the world, which is strange given that the City now has virtually no funds allocated for mural conservation or restoration and no legal mechanism for permitting murals located on private property, where most are located.  The City Council has been taking steps to rectify this, but the pace has been slow and no new funding has been identified to preserve the roughly two-thousand murals across the City.

Following the lead of such famous Mexican muralists as David Siqueiros, Diego Rivera and Jose Orozco, local artists began painting murals across the city in the 1960s and 1970s, with the majority in East Los Angeles, Hollywood, downtown and along the Great Wall of Los Angeles in the San Fernando Valley.  In the 1980s, murals became intertwined with graffiti art, as a recent record-breaking exhibit at MOCA recently detailed in great detail.

Today, many of these murals, including several commissioned for the 1984 Olympics, are either lost or badly damaged by taggers.  City leaders often speak of the importance of generating more local tourism to help attract investment in neighborhoods not traditionally considered top attractions.  Why not use some of the City’s Transient Occupancy Tax funding from hotel visitors to provide funds to save these murals, which are a major potential draw?

The Department of Cultural Affairs has seen its funding for mural restoration, never much more than $50,000 a year, eliminated and indirect support from the Department of Public Works’ Community Beautification Grants ended.  Council offices and neighborhood councils have access to limited funds for community improvements, but with a cost of between $10-30,000 per mural restoration it’s hard to tackle very many of them at one time.

Then there is the issue of the City’s Sign Ordinance, which since 2002 has prohibited almost any new mural on private property.  The City Attorney has been wary of giving any opening to sign companies who might want to erect large advertisements under the pretext of them being art.  Portland has come up with a solution to this problem by devising a program in which property owners can provide the City with a “public arts easement” to their murals.

The beauty of this approach is that the City can choose which murals to accept and which not to, thereby avoiding the City Attorney’s concerns.  The Council is still studying this idea at present.  This approach will require ongoing maintenance, but the expense should be lessened by new methods of coating murals to make them easier to clean and harder to deface.  The issue of how to address the City’s existing murals still remains to be answered, however.

The majority of the City’s murals were put up before 2002 and should therefore be exempt from the sign ordinance, though it’s not always easy to prove when a mural was painted.  The Cultural Affairs Commission has experience approving public art pieces as part of the City’s “Public Percent for the Arts” development law, and already has a process for property owners to apply for recognition.  They would be clearly able to handle this additional responsibility.

Perhaps part of the solution can be what is today a problem.  The County of Los Angeles has been extremely aggressive in pursuing cases against graffiti vandals, including juveniles, who can be slapped with civil penalties that take effect after they turn 18, and their parents, who are required to pay or see leans placed on their properties.  The City has laws on the books now to crack down on taggers and should use some of the restitution to help restore murals.

Today, a few property owners with significant pieces are seeking to preserve their murals.  They are frustrated at the way the City scolds them on the one hand (sending notices from the Building & Safety Department telling them to remove them), and praises them on the other (supports select projects and promises to develop a program for legalizing murals some day).  Many others simply allow their murals to be tagged and then eventually painted over.

We have a limited window of time to resolve this issue before a significant resource is lost.  Luckily, there are several Council members who are concerned about this issue (Jan Perry and Ed Reyes downtown, Jose Huizar in East LA, Tom LaBonge in Hollywood and Bill Rosendahl on the Westside).  With all this support a solution should be obtainable.  Until then, it will be up to those of us across the City who love murals to keep the heat on.

For more information about efforts to preserve murals in Los Angeles or to locate important works in your neighborhood I recommend that you check out the following websites:

● www.publicartinla.com/LA_murals (contains an excellent list of murals across the city)
● www.savelamurals.org (with information about their 9/17 “Great Wall of Los Angeles” mural restoration)

You can also read the Department of Cultural Affairs’ recent report on its recommendations for mural restoration and find contact information for their public arts division by clicking here.

(Erik Sanjurjo is the Vice President of the Hollywood United Neighborhood Council and an occasional contributor to CityWatch. He also worked for the Los Angeles City Council for over a decade on policy issues.) -cw