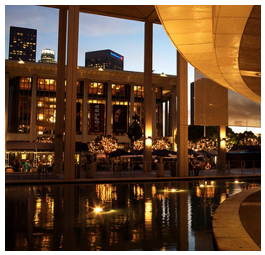 POLITICS AND THE ARTS - On a December evening in 1964, Jascha Heifetz, one of the greatest violinists of all time, stepped onto a stage in downtown Los Angeles to play Beethoven's Violin Concerto in D Major, officially opening the Dorothy Chandler Pavilion and a new era of high culture for the city.


The construction of the Pavilion, with its soaring concrete and glass structure, colossal chandeliers, onyx walls and 24-karat gold-leaf ceiling, served as the centerpiece of what was to become the Los Angeles Music Center -- a magnificent temple of the arts intended to compete for attention with the great music halls of the world.

Today, the Pavilion stands like an aging and neglected dowager. Its concrete is stained by years of downtown soot, its interiors are threadbare and its nearly 50-year-old carpeting is worn from thousands of performances and gala events.

It's a sad turn of events for this place that was intended to democratize the high arts in Los Angeles and bring together all its people in a setting of grandeur -- the wealthy movie types from Hollywood and the Westside, the waspy establishment from Pasadena and environs and the poor from the barrios of South L.A. and the Eastside.

The obvious deterioration of this once magnificent building points in part to Los Angeles' fixation on the newest and shiniest of toys, rather than its cultural underpinnings. Just across the street, supporters of the gleaming, Frank Gehry-designed Walt Disney Concert Hall managed to raise $274 million for construction, including $110 million from county government, while the Pavilion languished.

But it's also an indictment of county government, which owns the building, and the philanthropic indifference of businesses that once stepped up to finance this sort of project -- simply because it's good for the community.

I spent my high school and college years as an usher at the Pavilion and its two smaller siblings, The Mark Taper Forum and the Ahmanson Theater, that together comprise the Music Center. I loved walking into the Pavilion and its elegant surroundings. It was here that I viewed my first operas from backstage, listened to the L.A. Philharmonic under the direction of music genius Zubin Mehta and helped the famous to their seats during several Academy Awards ceremonies.

It also was here I witnessed an event that brought the 60s home for me -- a concert by Ravi Shankar that filled the auditorium not with the usual fur coats and suits but with tie-dyed shirts and the sweet smell of marijuana.

The deterioration of this landmark feels personal partly because of the symbolic role played by the Los Angeles Times, where for more than three decades I worked as a reporter/writer and managing editor.

The vast majority of the $35 million it took to build the Pavilion came from charitable efforts of the paper and the fundraising skills of Dorothy Buffum Chandler, whose family founded and ran the Los Angeles Times. It's difficult to walk around downtown Los Angeles without seeing the Los Angeles Times name or the names of Chandler family members emblazoned almost everywhere.

All that changed in 2000, when the Times and Times-Mirror, its corporate parent, were purchased by the Tribune Co. of Chicago.

Almost immediately, the Times, which had routinely given some $5 million annually to worthy community causes, halted those grants. Today, the paper and its holding company are once again under the control of a Southern California publisher, Eddy Hartenstein. But still there is no grant money. Times executives do not even volunteer for community boards -- unheard of in the days when the Los Angeles Times prided itself on its civic involvement.

This kind of detachment is dishonorable for a newspaper that is meant to serve its community. And it touches myriad causes well beyond the Music Center. But it's not just the Times that has failed the public.

Corporate headquarters, which historically have been generous to the arts, have been fleeing Los Angeles for years. The businesses that are left, for the most part, have severely limited their grants, generally giving only when they see a direct return to their bottom lines.

Andrea Van de Kamp, who served on the committee that raised construction funds for the Pavilion and spent seven years as the Music Center's chair, told me that plans for a renovation have been under consideration for more than a decade.

"The question has been funding," she said. She blamed a tussle between opera and dance interests, but also cited county bureaucracy for the lack of results. "The mix-up was with the county and there was never a clear definition of who does what and when."

Van de Kamp told me all that had been cleared up with completion of Disney Hall.

But that was eight years ago. And a call to the Music Center suggested there are no plans today for renovation.

"There is no story," Laurie Lang, the associate vice president of marketing and communications, told me. "Truly there is nothing to say."

I asked to speak with Stephen D. Rountree, president and CEO of the Music Center. Lang declined. "If there were something to talk about we'd be delighted to talk about it," she concluded.

In fact, there is a lot to talk about.

The slow decomposition of this public treasure represents a shameful shirking of responsibility, not just to the arts but to the city that has allowed so many people and businesses to thrive.

Look, I'm more of a pop culture guy than an aficionado of fine art. I don't mind confessing that occasionally I entertain myself watching "Keeping Up With The Kardashians." But even for me, the Dorothy Chandler Pavilion is a special place where the common man can feel elevated just by walking through its doors.

What's happened here is deplorable. But it would be a bigger shame if it's allowed to continue.

(Leo C. Wolinsky is a media consultant and former managing editor of the Los Angeles Times. This article was posted first at huffingtonpost.com) -cw