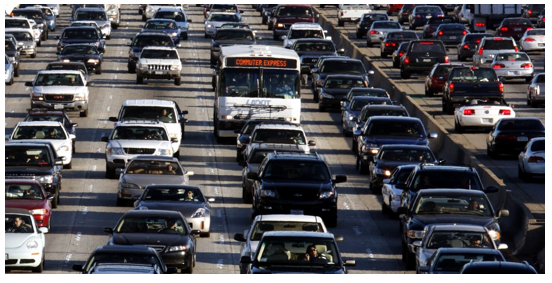 GUEST WORDS - It's funny that the curlers still work. But they're old, at least 20 years, so still from the days when things lasted. I didn't remember buying them -- probably hadn't. Someone probably left them here, since it's been way longer than 20 years since I've had to think about fixing my hair.

And not only that but making a sandwich, every morning -- the same one, just like in high school. Then it was tuna fish, now it's cucumber and feta, and then, once that's done, and I've finished pulling myself somewhat together, like the other people I used to wonder about, driving down the street in the morning, I join them in the daily crawl.

Not that it's bad for me, not compared to most of them. I head east on Sunset with everyone else for the first part, but that's pretty much wide open, at least through the Palisades and most of Brentwood, as long as I get out by a quarter to nine. It slows down, though, right after you pass the street where O.J. ran with his bloody glove, but I'm in the left lane by then, and still moving, while everyone else is stuck to the right, for their turn onto the 405, heading south.

I'm taking the same road, but in the other direction. No one's going north at this time in the morning, since there's nothing to do in the Valley, unless you're a maid cleaning the few fancy houses in Sherman Oaks and wherever else the quasi-rich live over there. But if you are, you're not on the 405 anyway. You yourself live somewhere out there too, to begin with.

But your husband or boyfriend or son is probably part of it, the morning slog that comprises the first part of the day for countless thousands who live out here. From my side of the road, it looks like they're not moving at all. They must be, of course, though. Must know, in fact, how much they're moving and how long it will take, since they do it every day, and plenty of them probably have to be wherever it is they're going on time. I find myself wondering if any of them had ever lived in New York.
Ever knew what it was like to step onto a train or even a subway, and sit down and open a paper and see what was up in the world, instead of this. There would be room, anyone could see it, for a light rail track down the center of this vast tangle, but they're putting in another lane, each way, instead.

Which will make six. Each way. Or maybe seven -- it's hard to count when you're on it, because the truth is, it's bloody hard, the singular one-on-one struggle onto the 405. My own strategy has evolved over the month I've been driving. I now get on not at the closest place, which would be Sunset; but instead curve under a bridge, and hit Sepulveda, a winding road that's fairly empty there and takes me past the Getty, gleaming white up there on its hill, and never more out of reach than these mornings, since once past it, I have to prepare for my own on-ramp, selected because it hits at a place where the 405 has started up the hills that enclose the Valley. That slows down the trucks and makes it easier for a small car to slip in.

And not just in, but over, because coming up soon after this is the Ventura Freeway, which most of the people on my side of the road are taking. They're all merging right, as I am replacing them to the left, blinker ticking, brow furled, body tense and leaning forward, eyes flashing between mirror and road. The far left lane here is bumpy, but the next one is smooth and usually moving well, seventy or so, unless you've got a nonplayer. An old car that's struggling up the grade, or worst of all, a "senior," with one of those tell-tale tags hanging down from their mirrors. Amazing, btw, how many of them drive BMW's. It used to be safe to follow one of them; now the only thing you can be sure of is a Porsche.

Probably because they're hard for the old folks to get in and out of, but the point is, I'm usually over by now, out of the fray, to the left again while the rest of them are squeezing right, and that's when I put my windows up and start fiddling with the radio. When I first started driving, my air-conditioning didn't work; I live near the beach, under the marine layer, so didn't have to use it. And I tried here for a while with the windows down, "wind in my hair," and so on, but it didn't work. It turns out that air-conditioning's an imperative, a given, on these freeways. It's 100 degrees in the Valley half the year, plus you can't hear the guy on the classical station giving his cute weather reports -- "72 in Fountain Park in Playa del Rey, 89 in Fountain Bowl in Orange County, 96 in Fountain Valley" -- which then leads to some apropos piece of music.

This morning it was Respighi's "The Fountains of Rome." And by the time it's at its crescendo, I'm at my own turnoff, the 118, renamed the "Ronald Reagan Freeway," which ticks me off, every single day. Since it's really because of him that I'm driving out here to begin with, on my way to Phoenix House Academy, to help raise money for a school for "youthful offenders," money that's been cut thanks to Reagan's legacy, his war against the poor.

And did he ever really have to face them, the kids he has eating catsup as their vegetable in school? Sitting in classrooms with no books and broken windows? Did he ever once visit their schools? Meet a "Welfare Queen," who, it comes to me, is the same kind of construct Hitler was so good at?

Too bad, I think, as I drive into the parking lot. He might have liked them -- the kids, at least. I do. It's a long drive for me, on the LA freeways, but when I get here, there are kids who are smart and brave and really trying to pull their tough young lives together. Kids who maybe, with some luck and the money for a few more months here, just might have a shot.


(Vicky Shorr is a writer who lived in Brazil for ten years, and has just finished a book on Brazilian bandits. She currently lives in Los Angeles and is the co-founder of the Archer School for Girls there. This article was posted first at huffingtonpost.com) -cw