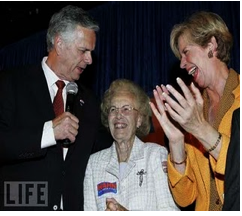 RANDOM LENGTHS - The atmosphere inside the ballroom at Ports O’Call Restaurant was thick with anticipation as the crowd of Democratic loyalists and locals began filling up the room soon after the polls closed on the night of July 12.

They were only expecting a couple hundred people to attend this campaign party for Councilwoman Janice Hahn’s election night celebration for U.S. Congress, but as the results started to roll in the crowd swelled and by 10 o’clock the owner of the restaurant estimated that there were more than 800 people.

The list of supporters included everyone from Mayor Antonio Villaraigosa, Los Angeles City Attorney Carmen Trutanich, City Controller Wendy Greuel and the mayor of Carson, Jim Dear, along with nearly everyone who is vying to run for Hahn’s soon to be vacated council seat. The exception was Rudy Svorinich Jr.

When Janice Hahn arrived to the podium the poll numbers were leaning decidedly in her favor with the absentee ballots giving her the same edge that turned out to be pretty much what the final count was the next morning 54.6 versus 45.4 per- cent for the Teabagger Craig Huey.

Hahn spoke with the confidence of a political journeyman who had just achieved a personal “right of passage” to becoming a master and the vibe in the room pulsated with a kind of celebratory unity that has been lacking for two years amongst Democrats in the wake of the 2010 elections.

Her entire family flanked her, save for her mother Ramona, who sadly, died suddenly the day before the election. Her brother, former LA Mayor Jim Hahn introduced her amidst the rising expectation that Janice would announce victory. She did not, but the attention of so many cameras from the media seemed to indicate that it was a foregone conclusion.

As it turned out, Hahn’s win was not a slam-dunk. But still a nine point win in an election where both sides spent over a million dollars in attack ads and direct mail solicitations. This is significant especially considering that Huey is a professional at right-wing campaigns.

Huey conceded the election in a phone call to Hahn’s campaign Wednesday morning. Hahn is reported to have already booked a flight to Washington D.C. for July 14 as the Democrats in the House of Representatives wants her sworn in as soon as possible. They need the extra votes!

This will leave an immediate vacuum of leadership at the council office, which will be filled by a caretaker administrator appointed to manage the position with the majority of Hahn’s council staff remaining to run the day-to-day affairs, but there will be no one to vote for the Council District 15 until a replacement is elected.

Of course the campaigns for this office have already been gearing up over the past few months. And, even as I write this editorial, both Los Angeles Police Department Sgt. Joe Buscaino and ex- Councilman Rudy Svorinich Jr. have sent out campaign announcements. Who’s to follow?

The sense of elated unity with Janice Hahn’s victory will only be a brief interlude into what will undoubtedly be a ruckus campaign between competitors from all parts of the council district, which could tend towards a nasty fight. At this point I can only say that the position of this newspaper is to provide fair and independent coverage, that any campaign trickery will be reported and exposed and that under no circumstances will I support Svorinich to win this office again. Longtime readers of this paper will understand this position and those newbies will be in- formed in subsequent reports.

All I can say at this point is that what we are witnessing is the end of an era of relative peace in the district led by the one of the most liberal council representatives we’ve ever had and any future council office holder will have a difficult, if not impossible, task of forging enough unity to maintain a political coalition as strong as Janice and Jim Hahn’s.

Even as Janice prepares for departure the stress cracks in the facade of the Hahn dynasty Pax seem to be appearing just as the fruits of her labors are beginning to be realized.

With no heir apparent for this now open seat, the question is who has the ability to lead into future rather than dabble in past conflicts?

(James Preston Allen is the Publisher of Random Lengths News. More of Allen and other views and news at  randomlengthsnews.com where this column was first posted) –cw