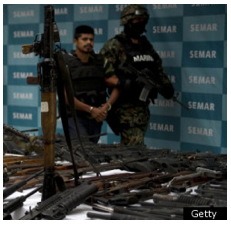 The report titled, “Operation Fast and Furious: Accounts of ATF Agents” outlines an insidious plan that many are calling the biggest cover-up in the last half century. (LINK)

Operation F&F has its roots in the ATF Phoenix Field Division (FD) operations under the rubric of Project Gunrunner, a pilot project developed in Laredo, Texas in 2005 to combat gun trafficking on the borders of Texas, Arizona, New Mexico and California. The Gunrunner was expanded as a national initiative in 2006.

The aim of the operation was to develop probable cause to arrest a suspect, called a straw buyer, or interdict the weapons and discourage, or stop, future illegal purchases. Straw buyers are individuals who are legally entitled to purchase guns for themselves but who do so with the intent to transfer them into the hands of Drug Trafficking Organizations (DTO) or other criminals.

According to reports, Mark Chait, ATF Assistant Director of field operations, said he changed the strategy because futile efforts to interdict guns from straw buyers were not successful in dismantling DTO’s in Mexico.

U.S. Department of Justice, Office of the Inspector General Evaluation and Inspections Division (OIG), criticized “Gunrunner” in their November 2010 review: “We found that these strategies and plans did not effectively address U.S.-Mexico coordination, joint operations and activities, or intelligence sharing between the Southwest border field divisions and the Mexico Country Office. The actual performance of ATF does not reflect a strategic approach to combating firearms trafficking.” (link)

The Issa/Grassley report, “The Phoenix Field Division” established a Gun Trafficking group, called Group VII, to focus on firearms trafficking. Group VII initially began using the new “gunwalking” tactics in one of its investigations to further the Department’s strategy.

The operation’s goal was to establish a nexus between straw purchasers of assault-style weapons in the United States and Mexican DTO’s operating on both sides of the United States-Mexico border.” (p.4)

The focus of F&F was to identify additional conspirators by establishing a connection between local straw buyers in Arizona and DTO’s in Mexico. ATF entered serial numbers from suspicious transactions into a database that would serve notification if any of the weapons were retrieved at a crime scene.

“The Department’s leadership allowed the ATF to implement this flawed strategy, fully aware of what was taking place on the ground. The U.S. Attorney’s Office for the District of Arizona encouraged and supported every single facet of Fast and Furious. Main Justice was involved in providing support and approving various aspects of the Operation, including wiretap applications that would necessarily include painstakingly detailed descriptions of what ATF knew about the straw buyers it was monitoring.

“This hapless plan allowed the guns in question to disappear out of the agency’s view. As a result, this chain of events inevitably placed the guns in the hands of violent criminals. ATF would only see these guns again after they turned up at a crime scene. Tragically, many of these recoveries involved loss of life.” (p.5)

The recent murders of Special Agent Jaime Zapata who was shot and killed by the Mexican Drug Cartel in Mexico in Feb 2011 and Border Patrol Agent Brian Terry who was confronted by two armed men and shot and killed in Arizona in December 2010 exposed the hideous operation when it was discovered that weapons used in both murders were traced back to overseen U.S. purchases.

John Dodson, Special Agent, ATF Phoenix Field Division, testified that the shooting of Congresswoman Gabrielle Gifford sparked a “state of panic” among those conducting the operation, as they initially feared a “walked” gun might have been used. (p. 39)

Group VII Supervisor David Voth’s email of April 2, 2010 boasted about the 359 weapons and the immense caliber of some of these guns, in just March 2010 alone (p.36) Estimates say that over 2000 guns were walked into Mexico during F&F Operations.

Under sworn testimony on May 3, 2011, Attorney General Eric Holder denied any knowledge of Gunrunner/ F&F, saying he learned about it a few weeks ago.

But at the Mexico/United States Arms Trafficking Conference in Cuernavaca, Mexico on April 2, 2009, Holder told members of the conference, “Last week, our administration launched a major new effort to break the backs of the cartels.  My department is committing 100 new ATF personnel to the Southwest border in the next 100 days to supplement our ongoing Project Gunrunner, DEA is adding 16 new positions on the border, as well as mobile enforcement teams, and the FBI is creating a new intelligence group focusing on kidnapping and extortion.” (Link)

Janet Napolitano’s testimony on F&F can be viewed here.

President Barack Obama approved and signed the stimulus funding in 2009, which funded the operation, but he denies any knowledge of Gunrunner/F&F.

On June 29, 2011- Issa issued a statement saying, "President Obama's remarks on Operation Fast and Furious were disappointing. There was no sign of urgency to provide answers or explain why no one at the Justice Department has accepted responsibility for authorizing an illegal gunwalking operation six months after Border Patrol Agent Brian Terry's murder.

“The American people expect more from the President than unsubstantiated assertions that the Attorney General didn't know about this reckless program and no explanation about who authorized it."

Equally disturbing are reports of another effort by ATF in Tampa, FL called Operation Castaway. Special Agent in Charge (SAC) Virginia O’Brien who worked in the Phoenix ATF where F&F was implemented helms the operation in Tampa. Reports suggest this operation is similar to the failed F&F but they have not been confirmed yet.

On July 4, 2011, Acting ATF Director, Kenneth Melson participated in a transcribed interview with Issa and Grassley.  In a joint letter the next day,  Issa/ Grassley published highlights of that interview (LINK).

“The evidence we have gathered raises the disturbing possibility that the Justice Department not only allowed criminals to smuggle weapons but that taxpayer dollars from other agencies may have financed those engaging in such activities.

“It is one thing to argue that the ends justify the means in an attempt to defend a policy that puts building a big case ahead of stopping known criminals from getting guns.

“Yet it is a much more serious matter to conceal from Congress the possible involvement of other agencies in identifying and maybe even working with the same criminals that Operation Fast and Furious was trying to identify.”

A press release issued by Deputy Attorney General James Cole would place more regulations on gun dealers in Texas, New Mexico, Arizona and California by requiring them to report multiple sales of these types of rifles to the same person within a five-day period. (Link)

“Neither Obama or the Justice Department have the power to make laws, they can only enforce them.

“Second, the U.S. Supreme Court has twice ruled that the 2nd Amendment provides an individual right to Americans to own firearms. This order interferes with that right. Third, the law targets the people of only four states.

“Again, that is something the President does not have the Constitutional authority to do.”

(Katharine Russ is an investigative reporter. She is a regular contributor to CityWatch and to the North Valley Reporter. Katharine Russ can be reached at    Katharine.russ@charter.net ) –cw