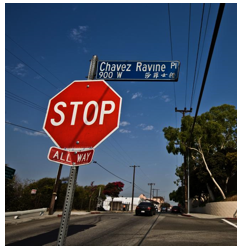 OUTSIDE THE LINES - In the Tank Frank, by far the most despised person in Los Angeles and all of Major League Baseball, is desperately trying to hit a couple of home runs to save his crumbling, debt laden house of cards.

He struck out when his efforts to enter into a Hail Mary 17 year, $1.7 billion media rights transaction with Fox Sports was rightfully rejected by the Commissioner of Baseball because The Boston Parking Lot Attendant intended to divert $173.5 million to his own personal use, contrary to his promises to the Commissioner.

But The Boston Parking Attendant still believes he has an ace in the hole: Dodger Stadium and the 275 acres in Chavez Ravine that are not owned by the Dodgers, but by other entities controlled by the “let them eat cake” McCourts.

So while Major League Baseball may try to force the sale of the Dodgers, Frank will claim that Dodger Stadium (also known as “Frank McCourt’s Ghost House”), the parking lots, and the surrounding land are not part of any transaction.  Rather, this tax scofflaw will claim that he is entitled to outlandish rents that were negotiated as part of his elaborate scheme to loot the Dodgers of over $100 million.

Needless to say, Major League Baseball will disagree, setting the stage for even more litigation.  MLB will rely on the contracts that Frank signed in February 2004 when he and Princess Jamie purchased the Dodgers and the related assets.

As part of his efforts to scuttle any sale of the Dodgers, Frank will maintain that this large open space so close to downtown LA is worth an absolute fortune because of its development potential.

For example, in April 2008, amidst great fanfare, Frank announced Next 50, a $500 million development plan that would transform Dodger Stadium and Chavez Ravine into a beautifully landscaped year round destination with tree lined pavilions and roads, restaurants, retail shopping, underground parking and the Dodgers’ own museum.  This environmentally responsible transformation of Chavez Ravine was scheduled for completion by Opening Day, 2012. (Link)

Whoops! Guess Frank missed that deadline.  But Next 50 is just another pie in the sky deal, just like buying a Premier League Football Team and Princess Jamie wanting to be Mayor.

But Frank and the Dodgers will need the cooperation and help of the City to develop Chavez Ravine.

For openers, Chavez Ravine will need to rezoned since it is currently classified as Open Space land use in the City’s General Plan. There will also be the need for extensive environmental approvals as well a reconfiguration of the surrounding streets and other related infrastructure.

While little Frankie will spin a mighty fine tale about the many merits of his world class development of Chavez Ravine, the City, including Frank’s pals Mayor Villaraigosa and Councilmember Ed Reyes, need to boycott The Boston Parking Lot Attendant, just as the fans have this season.

Rather than succumbing to the malarkey and overtures of this son of Boston’s notoriously corrupt construction industry, the City must make it absolutely clear from the outset that Chavez Ravine will not be rezoned and that the Dodgers will be responsible for any and all related costs.

The City also needs to insure that Frank and the Dodgers comply with all the laws and regulations that involve security, traffic, alcohol, and the environment, especially as it relates to storm water runoff, all on Frank’s dime.

We do not need another Battle of Chavez Ravine.  The first battle began in 1950 when the City condemned this tight-knit little valley community of Mexican-Americans and purchased their houses through the use of eminent domain.

In 2011, we do not need an ethically and financially bankrupt Boston land speculator trying to hold the City, its reputation, and Dodger fans hostage so that he can loot our heritage.

So the message to City Hall is loud and clear: Just say NO WAY to Frank McCourt.

(Jack Humphreville writes LA Watchdog for CityWatch He is the President of the DWP Advocacy Committee and the Ratepayer Advocate for the Greater Wilshire Neighborhood Council. Humphreville is the publisher of the Recycler -- www.recycler.com. He can be reached at:      lajack@gmail.com ) –cw