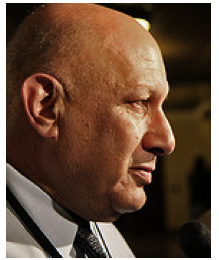 PERSPECTIVE - According to the Los Angeles Times, Council Member Dennis Zine cites as one of his reasons for running for City Controller is wanting to make the city more transparent and efficient. He claims his position as Chair of the Audits and Government Efficiency Committee has prepared him for the job [link] although he has only served in that capacity for three short months.

If the general fund could earn a dollar for each time a candidate promises transparency and efficiency, there would never be a deficit.

Mr. Zine has served on the City Council for ten years, plenty of time to rail against lack of transparency and inefficiency.  Yet, he has only recently raised concerns over the lack of follow-up on audits and incompetent or underperforming general managers. Could it be because he has decided to run for controller?

Regardless of committee assignments, audits and efficiency should be among all council members’ top priorities.

Why has he not publicly challenged his colleagues about ignoring half of the City Controller audits going back to Laura Chick’s tenure?

Why does it take an FBI investigation of the Building and Safety Department before he makes a public statement about crooked or incompetent management?

Why does he sit silently when an interim general manager with one of the worst track records in the city is confirmed to fill the position on a permanent basis without so much as a competitive process?

Nothing could be less transparent than the dealings between the city and AEG over the proposed downtown stadium, yet Zine may as well have sealed his mouth with duct tape. There are hundreds of millions of dollars at stake for the general fund with this deal. Who is protecting the interests of the city’s residents?  At least Council Members Krekorian and Rosendahl are fighting for an open discussion and challenging environmental exemptions for the project.

Zine and the person he wants to replace as controller, Wendy Greuel, have done nothing in support of transparency on this issue.  You would think that the City Controller and the (Z)Man Who Would be Controller might weigh in.

The most significant threat to the city’s solvency and ability to provide affordable services are rising pension costs.  It was a year ago that Dennis Zine said he was focused on pension reform.

Maybe he lost his glasses since then, but focused is not a term that can describe Zine’s role in restructuring the city’s pension and healthcare plans.  Recent labor deals have produced only weak concessions from the public unions.  Zine has been a quiet bystander.

One thing is for certain – his concept of pension reform, to the extent it might exist, does not eliminate double dipping.  Zine and Bernard Parks both enjoy their hefty city salaries and pension benefits.

Zine likes to point to his charitable contributions as if to justify the dual stream of taxpayer-funded financial support he receives.  I am sure he is sincere in his advocacy of the selected beneficiaries, but it is safe to assume he accrues, and enjoys, some political capital for the contributions as well.

Unfortunately, Wendy Greuel has turned the office of controller into a political stepping stone.  Zine wants to use it to enhance his pension benefits.

He is not prepared to act as a responsible gatekeeper of the city’s finances. The fact he has supported bogus budgets year after year, backed one of the most lucrative compensation packages ever offered by the city (which went to the IBEW) and was surprised by the impact of ERIP tells me he is someone who would have trouble balancing his own checking account.

On the plus side, he did generate revenue by writing traffic citations as a police officer, that is assuming the fines were ever collected – something else he failed to notice as a council member until recently.

One of these days the voters will realize it takes more than a career politician to understand the financial challenges this city faces.

I can only hope Zine faces a serious challenger with the resources to mount a campaign so Z Man’s suitability and plan for the office can be debated in public.

(Paul Hatfield is a CPA and serves as Treasurer for the Neighborhood Council Valley Village.  He blogs at Village to Village and can be reached at:  phinnoho@aol.com ) –cw