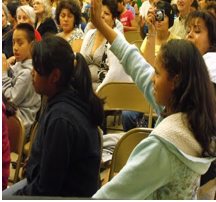 DAILY NEWS TO HOST MAYOR’S TOWN HALL - The Mayor of Los Angeles, Antonio Villaraigosa, will answer the public's questions in a town hall on Monday, May 23, at 6 p.m. at Reseda High School. [link] You must make your request to attend before May 18.

The Town Hall comes at a time when violent crime is up significantly in the City, [link] including three in Ed Reyes' Council District 1 in the past week. Among the past week's murder victims are:

The murder of Madera has been similarly neglected.

The beating of a SF Giants fan five weeks ago at Dodger Stadium on Opening Day, also in Reyes' district, remains unsolved despite the fact that there were over 100 witnesses to it.  (Follow this story and Joseph Mailander's commentary at street-hassle)

(Joseph Mailander is a writer and an observer. He blogs at street-hassle.blogspot.com where this column was first posted.) -cw