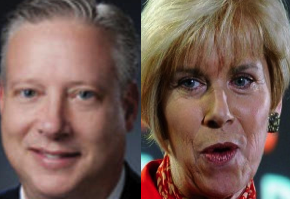 NOTES FROM THE EDGE OF LA - It goes almost without saying that the rest of Los Angeles hardly knows that the Port of LA is actually a part of the city, or that the largest seaport in the nation is run by a department of this metropolis.

In fact, most of the time anything that doesn’t line up politically on the east/west axis of downtown to LAX is considered marginally relevant, that is until the Valley and the Harbor decided to secede a few years back.

Then suddenly there was the first Mayor ever elected in the city who lived in San Pedro. Mayor James Hahn didn’t make a big deal out of it as his then-wife refused to live in the Hancock Park Mayor’s mansion, nor did he take being mayor so seriously as he could often be seen standing in line at Ralph’s buying groceries or taking his kids to dinner at the San Pedro Brewing Company.

When Mayor Jim was running for re-election, the LA Weekly sent a reporter down the 110 Freeway to sniff out a rumor that he was having marital problems. This, of course was true, but none of the Mayor’s neighbors, none of his then-wife’s friends, nor this newspaper would cooperate with the sensation-snooping reporter from “The City” trying to dig up “sleaze” on our Mayor!

Recently, the LA Weekly was back at it again, trying to implicate John Ek and his wife Esther in some kind of phony influence scandal headlined, “How Lobbyist John Ek Gets His Way at City Hall” by Gene Maddaus.

The writer boldly accused Councilwoman Janice Hahn, the former Mayor’s sister, of using EK, a registered city lobbyist as her ex-officio chief of staff. Well, it’s an amusing piece of gossip-laden reporting, amounting to nearly a promotional piece elevating Ek & Ek to the preeminent position of “King of L.A. Lobbyists.”

Much of what it reports could have been discovered by simply choosing the right night to have drinks at J. Trani’s or asking the Councilwoman who she spent last year’s vacation with, but who knows where he got his intel on Janice outside of Jesse Marquez, the well known Wilmington environmentalist?

Although John Ek resides in San Pedro and has been chairman of both the local Chamber of Commerce and the Boys and Girls Club, he has been perpetually shy about talking on the record to any reporter, even myself, which he refused to do even now.

The only thing that I could get out of him was that he “couldn’t have written a better story himself.” A curious comment seeing as how Maddaus is at once both slamming Ek for his influence, yet promoting him as the preeminent “insider” and deal maker.

The rule of thumb in getting publicity is always, “make sure they spell your name right” and with a two letter last name it’s hard to misspell it.

Meanwhile, Janice Hahn is in the throes of running the campaign of her life to replace long term Congresswoman Jane Harman (D-Venice), the wife of the late wealthy industrialist Sidney Harman who passed away on April 12.

Hahn is running neck and neck with Debra Bowen, the current California Secretary of State, Marcy Winograd, the 42 percent contender against Harman in last year’s Democratic primary, and an entire herd of unknowns and Republican contenders in an open primary.

One has to ask why the LA Weekly is now attempting to sabotage Hahn’s political career when they’ve had the opportunity at any point over the last twelve years? And why they don’t take on the substantive questions like, “which way to L.A.’s future?” But they don’t.

With this election coming on May 17, there is no clear winner to garner the requisite 50-percent-plus-one votes to declare a virtual winner without a run off. But who’s waiting to see if Janice will be in that race?

Assemblyman Warren Furitani, David Greene, President of the San Pedro Democratic Club and LAPD Sergeant Joe Buscaino have all but announced that they are running for an office that is not, as yet, even open.

Curiously, Buscaino is using his campaign for Honorary Mayor and his badge relationship to the community, as the “soft opening” for the hard politics that will surely pit several more local San Pedrans and others from various parts of CD-15 in what portends to be a 12-way arm wrestling/beauty contest for Hahn’s seat at City Hall while it is still warm.

The question that remains unanswered, or even unasked by the good reporter of the LA Weekly, while the city continues to give away hundreds of millions in bed tax dollars to wealthy downtown central developers is, “What’s the benefit to the rest of the boroughs of Los Angeles when we get so little back in benefits and even less in respect?” I mean Leimert Park doesn’t even get a station on the Metro Crenshaw line!

What has been missing from the civic debate of this city is why does the metropolis turn its back to the Port and the communities that surround it and why isn’t a significant portion of the revenues garnered by the city being poured into downtown making it the Mecca of all things LA rather than pouring it into the 32 cultural arts districts throughout the city if only to counter the great sucking sound of the capital drain surrounding City Hall.

(James Preston Allen is the Publisher of Random Lengths News. More of Allen … and other views and news at  randomlengthsnews.com where this column was first posted)   -cw