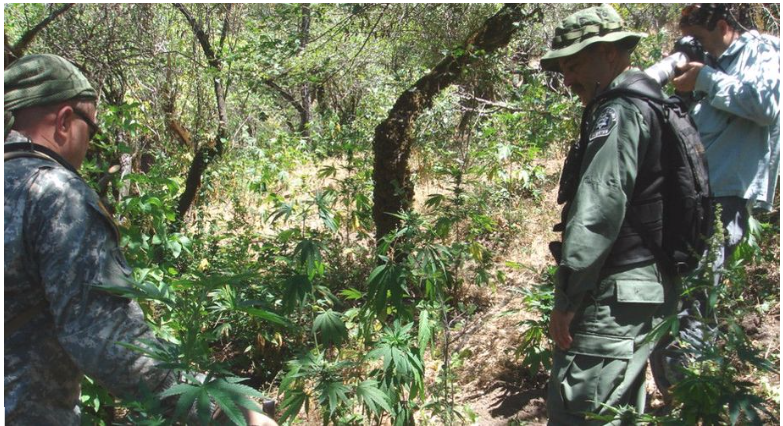 420 FILE--The Campaign Against Marijuana Planting (CAMP) has raided 254 illegal cannabis grows in the Golden State this year — less than half as many than they busted in 2017.

A California law enforcement task force has destroyed over 600,000 illegally grown cannabis plants so far this year in an attempt to put an end to the state’s thriving black market. In a press conference on Thursday, state Attorney General Xavier Becerra announced that the Campaign Against Marijuana Planting (CAMP) has busted 254 illegal pot grows so far this year, seizing 110 weapons and arresting 52 individuals in connection with these operations.

California has long been one of the epicenters of illicit pot production in the U.S. — it’s been estimated that the state produces 11 million tons of black market weed annually. Illegal grow operations hidden throughout the forests and mountains of California account for a large amount of this contraband weed, most of which ends up being smuggled to states where pot is still prohibited.

“The majority of these grow sites are in protected wilderness areas, like the Trinity Alps Wilderness area in Northern California, or the Palomar mountains not far from where we are today in San Diego,” said Becerra, according to the San Diego Union-Tribune. “These areas have been preserved so that California families can enjoy them, not so that criminals can profit from illegal activity.”

“The only reason marijuana is grown on public lands is for profit; it’s circumventing California state law,” Karen Flowers, special agent with the Drug Enforcement Administration’s San Diego Field Division, told the Union-Tribune. “The grower does not have to get a permit. They do not have to follow health inspections or meet any type of county code or state law. They operate with impunity. It’s low cost and it’s very high reward.”

During the 12-week CAMP operation, four teams of law enforcement officials seized and eradicated 614,267 illegally-grown pot plants in 39 California counties. One of these illegal grow operations was found to be diverting water from the San Joaquin River in Stanislaus County, while several others were found to be using federally-banned toxic pesticides on their sites.

“Illegal planting on public land hurts everyone,” Becerra said Thursday. “It hurts Californians who want to enjoy our state and national forests. It hurts farmers who depend on access to safe water and healthy soil. It hurts families, including drinking water that’s contaminated by illegal pesticides used on these sites, and it hurts every Californian that wants to play by the rules in our state when it comes to the use and grow of cannabis.”

Although the CAMP operation has eradicated a massive number of illegal marijuana plants this year, the number pales in comparison to previous years. Last year, CAMP eradicated 1.26 million pot plants, and 1.5 million plants were destroyed in 2016, the Union-Tribune reports. The recent legalization of recreational marijuana certainly accounts for some of this year’s decrease, but Becerra’s office also believes that this year’s wildfires account for some of the drop. In July, over 688,000 acres of northern California were burned by wildfires, and many legal and illegal pot farmers alike saw their plants go up in smoke.

Oregon may well be the next state to see massive raids on cannabis growers. The state has been struggling with an extreme overproduction problem, after relaxed regulations allowed cannabis farmers to grow over 1.5 million pounds of excess pot annually. The massive oversupply has caused prices for legal pot to plummet, and many farmers have found themselves selling off excess weed to the black market in order to make ends meet. Oregon U.S. Attorney Billy Williams has threatened that the federal government may intervene if the Beaver State can’t bring the problem under control.

(Chris Moore is a New York-based writer. This piece was posted most recently at MerryJane.com.)