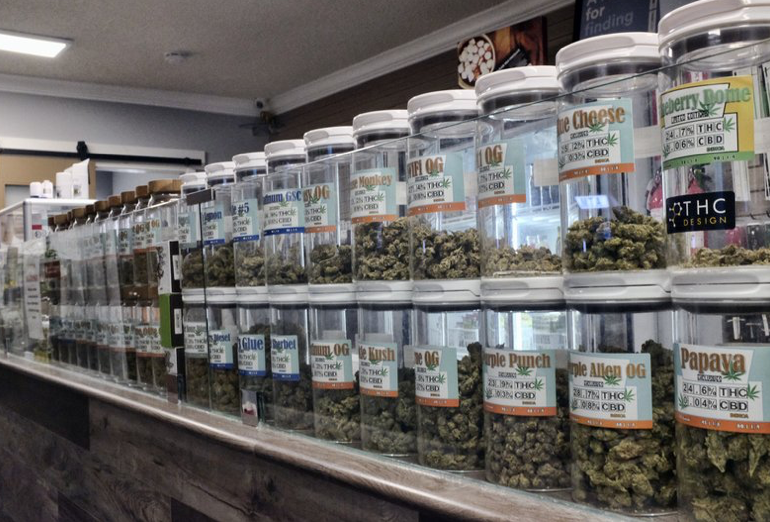 420 FILE--Cannabis consumers soon should be able to shop at licensed stores in California without worrying about whether products on the shelves are laced with pesticides and other contaminants often found in black-market weed.

Customers also will be able to see, on the package, how potent their products are, where they came from, and what other ingredients are used in any cannabis-infused edibles.

But all that will be true once new state-mandated safety standards for marijuana kick in July 1. Until then, consumers can expect to see something of a cannabis roller coaster.

For the next few weeks, retailers will do what they can to move stockpiles of untested product left over from California’s unregulated gray market. What they can’t sell by July 1, in theory, they’ll have to destroy.

And once the old inventory is cleared out, experts say, licensed shops might be looking at a very different problem — a cannabis shortage.

Many marijuana shops loaded up on inventory in late 2017, before California, on New Years Day, launched legal recreational marijuana sales and imposed hundreds of pages of new rules for the cannabis industry.

State regulators gave businesses a six-month grace period to sell off their old stockpiles, as long as the packaging told customers that the product didn’t meet new state standards. But sales this year have been slower than expected, and many shops still have lots of unsold inventory, said Josh Drayton, spokesman for the California Cannabis Industry Association.

“We do have inventory that needs to be sold by the July 1 deadline,” said Jesse Henry, executive director of Barbary Coast dispensary in San Francisco. “We wanted to make sure we had enough quality product, mostly flowers, on hand during the transition phase and we made sure we purchased enough before Dec. 31, 2017.”

Retailers were hoping the state might extend the grace period on some products, but that’s not happening. Over the past week, the Bureau of Cannabis Control sent out reminder notices telling retailers that the new rules will be firm starting July 1.

“We gave everyone six months to use up their supply on hand and get ready for the new standards that were coming July 1,” said Alex Traverso, spokesman for the state’s cannabis bureau. “We felt like that was a sufficient amount of transition time.”

Here are the new cannabis regulations that kick in July 1.

— Products must be properly labeled. Labels must include lab results, a universal symbol for cannabis products, the date the product was made and a safety warning. Edibles also must list ingredients and nutrition information. And no products can include cartoons, the word “candy,” or make unproven health claims.

But some experts are still worried about bottlenecks in other segments of the industry.

For example, the Bureau of Cannabis Control has licensed just 28 labs statewide, so far, and a number of those haven’t yet opened their doors.

In theory, with less than three weeks left before the licensing rules kick in, that should have led to a glut of products in the licensing pipeline. But for Steep Hill lab in Berkeley, while there has been an uptick in business, it hasn’t been as big as expected, according to chief revenue officer Tony Daniel.

“We were a little surprised that more growers and producers weren’t coming to the labs to make sure that their products were going to survive compliance,” Daniel said. He noted that many businesses seemingly skirt the rules for as long as possible so they can pocket the 1 to 5 percent that testing adds to wholesale prices.

Steep Hill more than doubled in size in recent months, leading up to the July 1 deadline, Daniel said. So, when business begins to surge in the next few weeks, he doesn’t expect any delays in turnaround time.

But Daniel also said companies that haven’t had their products tested could be in for a rude awakening if they discover they have clean-up work to do before they can send items to market. That, in turn, could leave shops without enough legal product to sell.

The degree to which California’s marijuana industry falls in line with the new policies — or continues pushing product to the state’s still-thriving black market — will depend largely on whether the state puts teeth into its rules, Daniel said.

“Regulation without enforcement is completely worthless,” he said.

The Bureau of Cannabis Control has been doing compliance checks all over the state, Traverso said, and will continue those checks after July 1.

But the state has largely been issuing warning notices, giving businesses time to comply with the new rules. And state funds to support stepped-up enforcement have so far been stripped from the budget.

As tough as the environment is for regulated businesses, Drayton of the Cannabis Industry Association is urging cannabis entrepreneurs to be proactive about compliance and to support the safety rules set to kick in July 1.

“We fought for legalization with public safety and public health in mind,” he said.

“This date needed to happen at some point.”

(Brooke Edwards Staggs posts at The Californian … where this piece originated.)