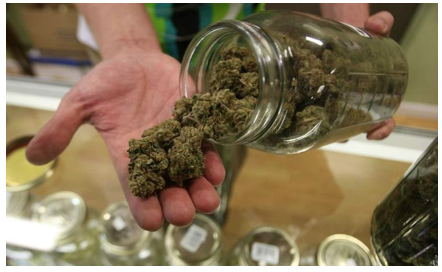 420 FILE--Just weeks after a California measure legalizing the use of recreational marijuana went into effect, San Francisco District Attorney George Gascón announced on Wednesday that the city will wipe clean the records of thousands of individuals who have been charged with marijuana-related misdemeanors and felonies over the past several decades.

"There are millions of Californians with marijuana convictions on their record. Automatic expungement is neeeded to truly repair the drug war's harms."
—Jag Davis, Drug Policy Alliance

"While drug policy on the federal level is going backwards, San Francisco is once again taking the lead to undo the damage that this country's disastrous, failed drug war has had on our nation and on communities of color in particular," Gascón said in a statement on Wednesday, alluding to the Trump administration's recent announcement that it will rescind federal policy that allows Americans grow, sell, and use marijuana in states where it's legal.

Noting that California's new marijuana law allows citizens to petition courts to have their convictions tossed or reduced, Gascón notes that the process can be expensive and time-consuming.

"A criminal conviction can be a barrier to employment, housing, and other benefits, so instead of waiting for the community to take action, we're taking action for the community," Gascón said.

San Francisco's decision to retroactively apply Proposition 64, which was approved by voters in November 2016, was immediately applauded as a massive "step forward"—one that must be replicated throughout California and in other states that have legalized marijuana in order to "truly repair the drug war's harms."

This work is licensed under a Creative Commons Attribution-Share Alike 3.0 License.